In Iraq military hospitals, all patients — friend and foe — are treated equally Capt. Leslie Goodwin, an intensive care nurse at the Army hospital in Baghdad, helps Dihar Aljazy, 5, learn to walk again after bandits shot her in the back. Her grandmother, Jammala, center, says Americans “deserve more gratitude from our side.” (Ward Sanderson / S&S)

Capt. Leslie Goodwin, an intensive care nurse at the Army hospital in Baghdad, helps Dihar Aljazy, 5, learn to walk again after bandits shot her in the back. Her grandmother, Jammala, center, says Americans “deserve more gratitude from our side.” (Ward Sanderson / S&S) Nurses 1st Lt. Jill Schroeder, left, and Capt. Batina Sundem discuss the care of their patient, an insurgent whose homemade bomb blew up in his hands. (Ward Sanderson / S&S) 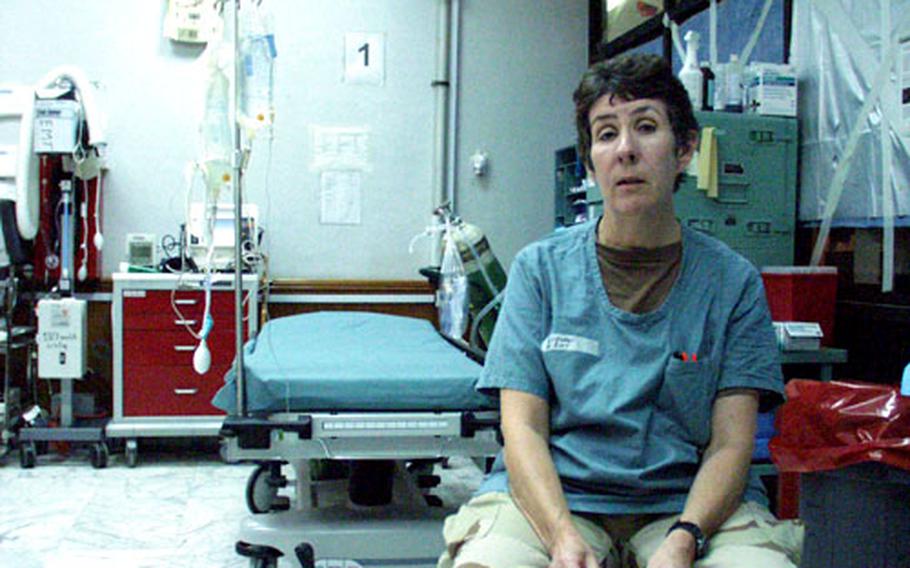 Maj. Patricia Born works in the emergency room at Ibn Sina Hospital. When the nurse sees both Iraqi and American casualties following a bombing or gunfire exchange, there&#39;s no way to tell who was injured how—the Iraqis could be either bystanders or insurgents. "You just don’t know," she said. (Ward Sanderson / S&S) Spc. Steve Hodgkins said some insurgents actually renounce violence after being treated with kindness by nurses such as himself. He said he&#39;s had insurgents call him brother. Others have spit, bite or thrown containers of urine at him. (Ward Sanderson / S&S)

BAGHDAD &#8212; The light was the sad blue-green that all hospitals seem to have, and Capt. Batina Sundem smiled through it toward Mohammed.

Mohammed was wrapped in yellow plastic that kept his protruding intestines from drying out. Sundem seemed sunny despite the pallid light.

Chirpily, she asked Mohammed if he was her friend. He weakly shook his head no. Would he be her friend if she gave him water? Yes. That he would do.

Mohammed had blown a hole in his belly trying to build a bomb to kill U.S. soldiers.

This is normal for the nurses of Ibn Sina Hospital, once Saddam Hussein&#8217;s private center and now the Army&#8217;s busy facility in Baghdad. Caring for American troops and the insurgents with whom they fight drains nurses and twists their insides around like gauze.

They must treat all patients the same.

The most severely injured must be treated first, regardless of nationality. The nurses work 12 hours a day, six days a week. And some struggle with fears that time spent mending enemies might deplete energy they could use to heal their own soldiers.

Nurses who work exclusively with prisoners rotate to the GI ward after six months; it&#8217;s just too much. Nurses in the emergency room and intensive care unit see all patients before they&#8217;ve ever been sorted into bad guy or good.

Sundem tries to stabilize patients before they can go home, to prison or to another hospital. Sometimes she sends terminal soldiers back to Germany, and there they will die. But at least they will see their families one last time.

To cope with the insurgents behind that, Sundem focuses on the Golden Rule and on her husband, a Ranger deployed to the Middle East six times since Sept. 11, 2001. She hoped a nurse would take care of him were he ever captured.

Down the hall padded the small feet of another local. Dihar Aljazy, 5, struggled behind her walker. She moved slowly but she did not strain.

Bandits shot Dihar in the back seven months ago.

Nurse Goodwin has seen other sentiments.

Children have made bombs and acted as decoys for insurgents. In the hospital, &#8220;They seem so passive. And here you were, making a bomb.&#8221;

Ramadan is beginning, and the nurses are worried. Any special date could bring more bombs, more bullets, more business.

Maj. Patricia Born, acting head nurse in the emergency room, treats troops and locals just off the streets of urban warfare. When they arrive she doesn&#8217;t know who locals are and how they were hurt.

Others are locals injured in the crossfire.

Some of the Iraqi injured who later turn out to be insurgents come in looking angry and hard. The eyes of the young, though, go wide with fear.

Other children may be members of Iraqi families who drove through military checkpoints and were shot by soldiers fearing suicide bombers.

On a busy day, emergency nurses must treat the queued injured in the hallway.

Though their mission is to treat everyone the same, feeling the same about everyone is not easy. If patients survive the ER they may see Spc. Steve Hodgkins, who works in intensive care. After a few moments, Hodgkins&#8217; voice loses its clinical detachment and takes on an aching note of conflict over the cost of being so humane.

He&#8217;s heard stories of insurgents recovering, somehow being released, then winding up attacking troops again. Some bite, spit and throw containers of urine at nurses.

Hodgkins, who often lowered his eyes as he spoke, nonetheless fears the following scenario: He spends several units of a type of blood trying to save an Iraqi who dies anyway. Then a GI comes in, needing 12 units of that same type. Only 10 remain.

This evokes Hodgkins&#8217; memory of the shattered soldier who, after being bombed, needed not shrapnel removed from his arm, but shards of bone that were once his friend.

This can harden a man. Then Hodgkins will treat an Iraqi child who witnessed his parents machine-gunned to death, and he melts again. Or he remembers the thief shot while robbing a mosque, and how the thief was relieved to discover the object of surgery was to fix his wounded leg, not to cut off his hand.

These feelings clash. They don&#8217;t compute.

Capt. Laura Ricardo, who wears hats from spokeswoman to clinic head nurse, said she could relate. She&#8217;s held a broken soldier&#8217;s hand and felt anger toward those who hurt him. Then she asked herself, what if I were born poor and in Baghdad? How would I behave? What would I believe?

The nurses, though, are tired.

&#8220;Just about every day we were holding an American who was dying,&#8221; said 1st Lt. Jill Schroeder, sniffing as she remembered April, when the fighting was especially terrible.

Recently an insurgent complained that Schroeder hadn&#8217;t fanned him enough in the heat. She said she treats three or four Iraqis for every American.

Everyone wants to be treated by the Americans, she said. But after nearly a year here, the healers who treat insurgents like Mohammed, the failed bomber, may need healing themselves. The pain of the heart is less apparent than that of an opened belly, but it aches all the same.