In Iraq, inventing ways to keep spirits up 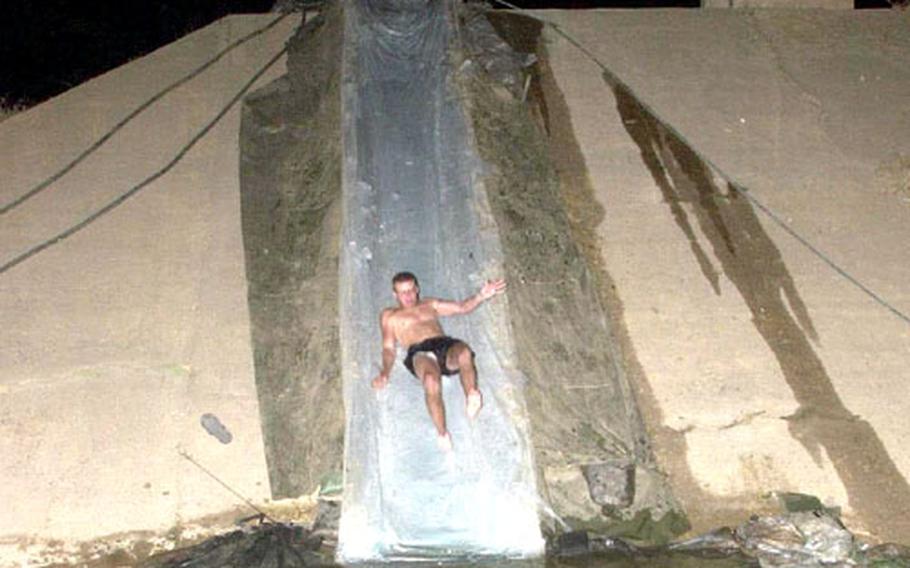 Some troops take rest and relaxation into their own hands. An artillery battery at Kirkuk Air Base in Iraq built this water slide along the side of an old Iraq bunker. (Jon R. Anderson / S&S)

Some troops take rest and relaxation into their own hands. An artillery battery at Kirkuk Air Base in Iraq built this water slide along the side of an old Iraq bunker. (Jon R. Anderson / S&S) 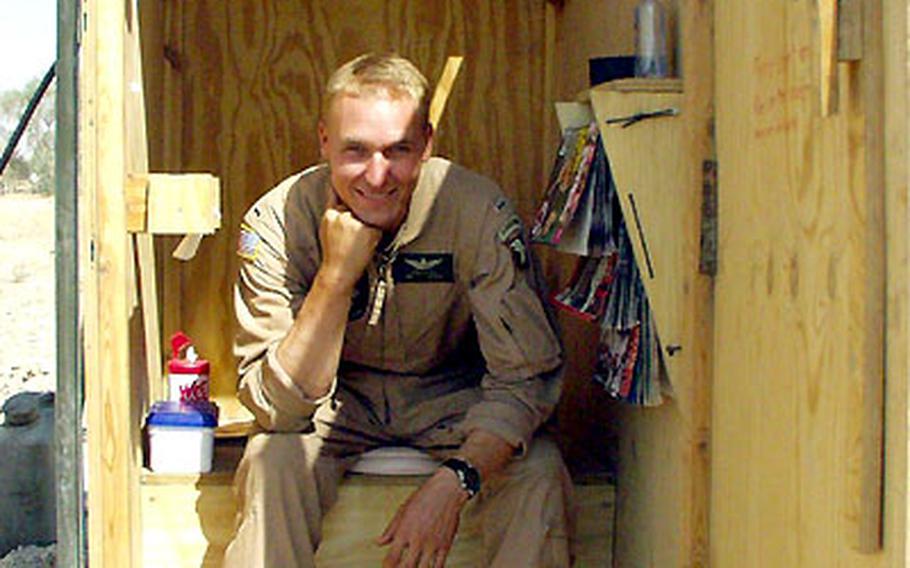 Chicken is grilling in the barbecue pit, drinks are chilling in the cooler, tunes are blasting on a boombox, and guys have stripped off their shirts to play beach volleyball or sink into the pool.

Could be a first-week-of-school party at any college fraternity in America, except for the desert camouflage and the M-16 rifles. And, of course, there&#8217;s no beer.

Welcome to the home of Battery D, 319th Field Artillery Regiment, whose 155 members patrol some of the nastiest parts of Iraq all week but still find time to relax at a Friday night blowout.

Battery D&#8217;s morale easily could have waned when its soldiers found out the 173rd Airborne Regiment wouldn&#8217;t return home to Vicenza, Italy, in late summer, as expected. It could have collapsed after one of the soldiers was killed Aug. 1 in a grenade attack.

Others might have looked at the rubble-strewn shell of a barracks Battery D calls home and groaned.

But not 1st Sgt. James Mitchell, Battery D&#8217;s noncommissioned officer-in-charge. The 41-year-old from Rohnert Park, Calif., is half a head shorter and 40 pounds lighter than most of his men, but he can still outrun, outlift and outwork most of them and he isn&#8217;t inclined to let his unit dwell on bad things.

So Mitchell put his men to work. They bought two large kiddie wading pools from a merchant in Kirkuk, fortified them with sandbags and filled the pools with water. Within a few hours, the battery had instant relief from the 125-degree desert heat in late August.

Mitchell&#8217;s cooling-off scheme grew when he saw a pyramid-shaped bunker outside the barracks&#8217; back door.

He persuaded some engineers to dig a small pit next to the bunker, then lined the hole and the sloping face of the bunker with plastic tarps to hold water. They ran a hose to the top of the pyramid, and opened what is probably Iraq&#8217;s only water slide.

Then Battery D unpacked the horseshoe and volleyball sets they&#8217;d brought, setting them up in a sandy field next to the water slide. They borrowed a large barbecue from another unit.

Since the weekly bashes began in late July, they have grown at the base, which is home to about 3,500 troops. Mitchell even welcomes people from the Air Force side of the camp, helping to ease resentment between soldiers and airmen that is rooted in the Air Force&#8217;s superior living conditions.

The parties now include a speaker system, disc jockeys, talent shows and rap contests. Inspired by Battery D, other units have started hosting their own weekly parties. Troops all over Kirkuk now look forward to the end of the week.

Nor is Battery D the only unit in Iraq to beat the blues with ingenuity and elbow grease. Half an hour northwest of Kirkuk by air is Qayyarah West, a sandy, decrepit former Iraqi air base. The 6th Battalion, 101st Aviation Regiment, a Black Hawk unit from the 101st Airborne Division, arrived there before any other American troops.

They had no building supplies and few tools when they moved into a former garbage-filled maintenance shop stripped of windows, doors, plumbing and wiring.

Rhaburn, 43, a native of Belize, had thought to include plywood, a drill, a handsaw and screws with the supplies the unit brought from Fort Campbell, Ky.

His proudest achievement is a first-class outhouse dubbed The Marriott because of its relative luxury. It was built tightly and surrounded by sandbags to keep out flies. Starting with a padded toilet seat, Powell loaded it with every comfort.