In Iraq, find a bomb and save a life 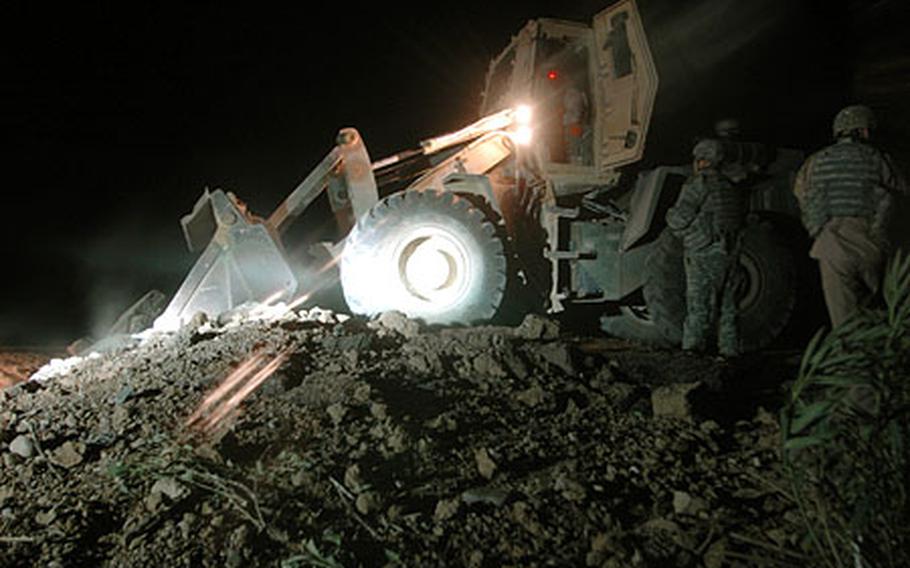 Members of the 60th Engineer Company use heavy equipment while repairing a crater left when a donkey reportedly tripped a roadside bomb. (Les Neuhaus / S&S)

Members of the 60th Engineer Company use heavy equipment while repairing a crater left when a donkey reportedly tripped a roadside bomb. (Les Neuhaus / S&S) 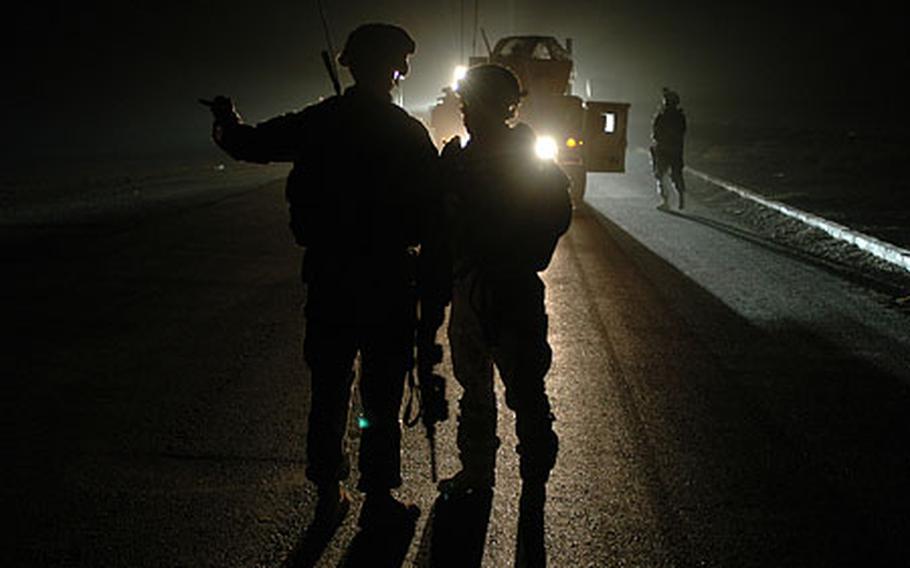 Members of an anti-roadside bomb team search an area at night near the remote northern Iraqi city of Qayyarah. The soldiers are with the 5th Battalion, 82nd Field Artillery Regiment. The battery was recently hit three times in one week by roadside bombs, but sustained no casualties. (Les Neuhaus / S&S) 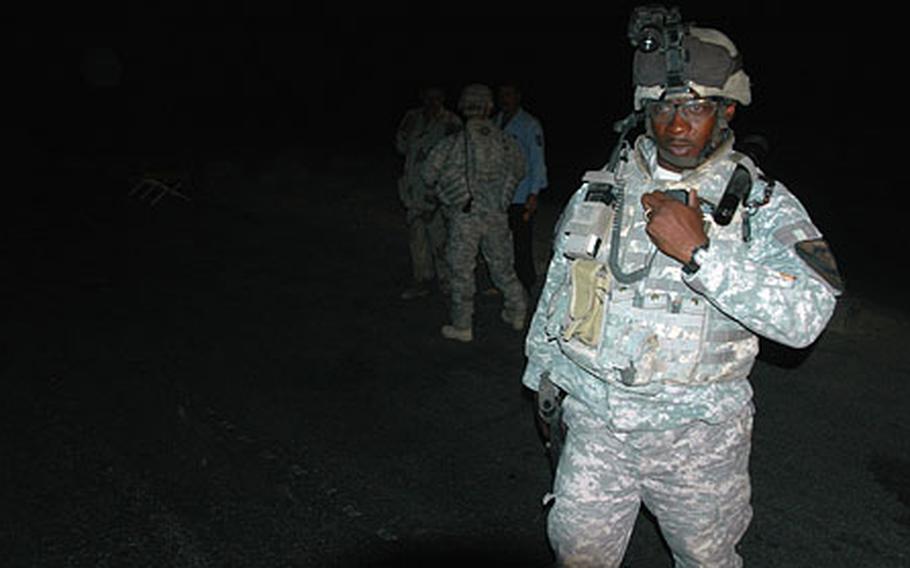 Sgt. Marvin Embry, 33, calls in a status check at an Iraqi checkpoint after members from his unit stopped briefly while on an anti-roadside bomb patrol. Embry and the other soldiers are with the 5th Battalion, 82nd Field Artillery Regiment, 1st Cavalary Division. (Les Neuhaus / S&S)

Every night and day in Iraq, U.S. military patrols venture out to find and eliminate roadside bombs.

It&#8217;s a murky world largely carried out in darkness for soldiers of the 5th Battalion, 82nd Field Artillery Unit, 4th Brigade, 1st Cavalry Division in Iraq&#8217;s north. Imagine trying to find a needle in a haystack, only with the world&#8217;s most up-to-date technology.

Two members of the battalion were killed by a roadside bomb just a little more than a month ago &#8212; the first two deaths for the unit.

Those deaths set off alarm bells, loud and clear throughout the battalion.

In its area of operation, which includes an infamous highway running the length of the country from north to south known for insurgent and roadside bomb activity, there is a curfew of 10 p.m. to 5 a.m. Troops have the authorization to stop all vehicles on the road during those hours.

But this does little to deter would-be bomb planters.

On Wednesday, a sniper from Battery A killed one bomb planter and arrested two others caught in the act. The battery member who killed the Iraqi man had been waiting for hours &#8212; set up in a position only a few feet from where the perpetrators had pulled their car over to begin the clandestine dig to plant the bombs.

According to the battalion&#8217;s operations officer, Maj. George Johnson, 39, from Desoto, Mo., materials recovered from the trunk of the vehicle included a shovel, pick, homemade explosive materials, copper wire and a motorcycle battery, which are commonly used as the power feed to such improvised devices.

On Sunday, another sniper from Battery A caught three more Iraqi men red-handed and shot them dead, bringing to four the count the unit had killed in the last week alone. On Saturday, soldiers picked up an Iraqi policeman wanted as a suspected bomb planter. He is currently being held at the interrogation and detention facility for the battalion&#8217;s brigade headquarters in Mosul.

&#8220;You never know what you&#8217;re going to get into,&#8221; said Staff Sgt. Charles Shuck, 28, of Lanceford, Pa., while sweeping a crater being repaired on the notorious north-south highway. The spot had been where a donkey reportedly set off a roadside bomb accidentally, leaving a 6-foot-deep and 25-foot-long hole in the northbound portion of the highway.

Shuck is a military dog handler, and with his specialized search dog, Gabe, goes out routinely to find the needles in the haystack.