In Iraq, fear is a constant companion 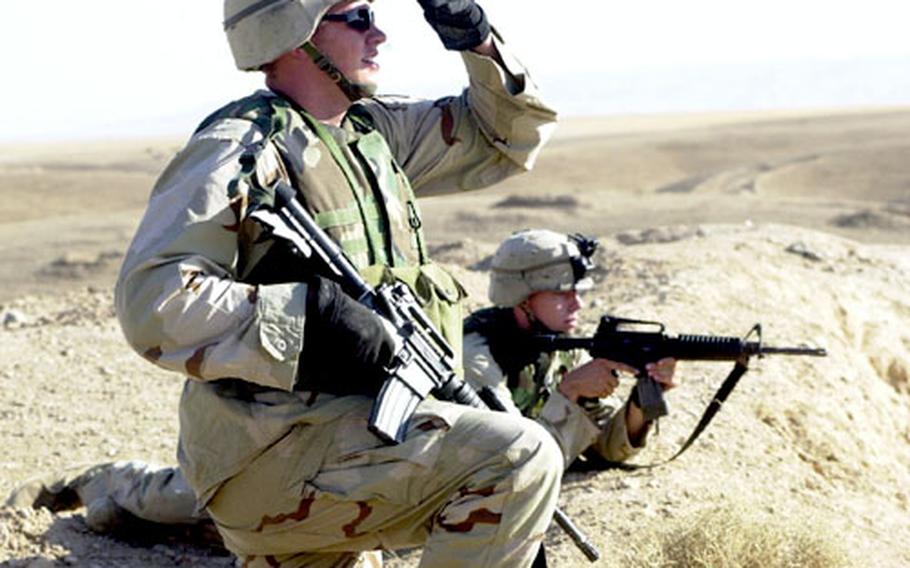 Two paratroops with the 173rd Airborne Brigade take up a position on a bluff overlooking the “Bridge of Death,” where U.S. troops have been attacked and killed in Iraq. (Jon R. Anderson / S&S)

Two paratroops with the 173rd Airborne Brigade take up a position on a bluff overlooking the “Bridge of Death,” where U.S. troops have been attacked and killed in Iraq. (Jon R. Anderson / S&S) 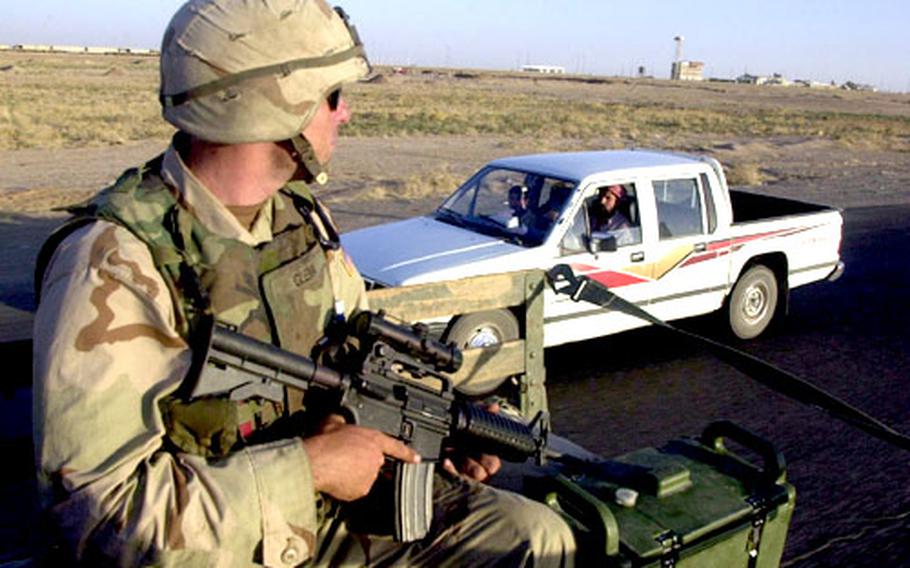 Friend or Foe? As the casualty count in Iraq continues to rise, attacks come without notice in convoy ambushes and mortar attacks and from lurking snipers. (Jon R. Anderson / S&S) 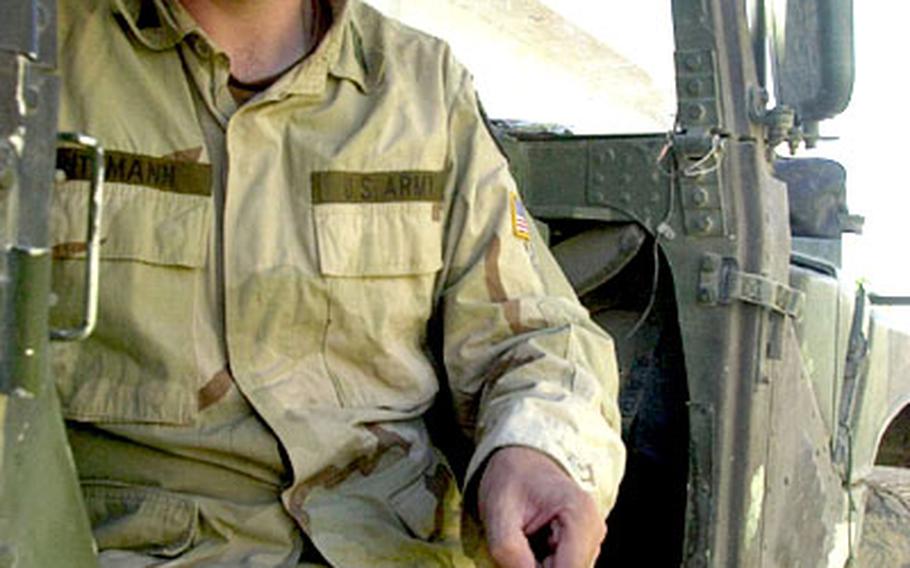 He never questioned going into Afghanistan in 2001. A paratrooper with the 75th Ranger Regiment, he was among the first combat troops on the ground.

He never questioned going into Iraq. Among the first ground combat troops in northern Iraq, Haynes parachuted in this time with the 173rd Airborne Brigade.

Haynes never questioned anything until Spc. Justin Hebert was killed on Aug. 1.

Hebert&#8217;s patrol was caught in a midnight ambush as it crossed what has become known the &#8220;Bridge of Death.&#8221; The bridge connects a lonely stretch of road that cuts down steeply from a desert ridgeline, crossing the Tigris River about 120 miles north of Baghdad.

A rocket-propelled grenade blast decimated the side of Hebert&#8217;s 5-ton truck. He died four days after his 20th birthday and three months after President Bush declared the end of major combat operations in Iraq on May 1.

&#8220;I&#8217;m still very angry about his death,&#8221; said Haynes, sitting in a riverside patrol site not far from where his buddy was killed. The slain soldier, a forward artillery observer assigned to 1st Battalion, 508th Infantry Regiment, had once served as Haynes&#8217; radioman.

As far as Haynes is concerned, the war here is over. Saddam&#8217;s regime is gone. No weapons of mass destruction have been found.

&#8220;Fifty percent of those attacks were conducted at a long range,&#8221; Lt. Gen. Ricardo Sanchez, the top ground commander in Iraq, told reporters on Sept. 4.

In those attacks, he said, &#8220;the enemy has made a decision to stay away and not engage us other than with improvised explosives that are being remotely controlled, or with mortars where they can escape readily.&#8221;

The rest of the attacks, like the one that took Hebert&#8217;s life, &#8220;are being conducted with a combination of small arms, rocket-propelled grenades and improvised explosives,&#8221; Sanchez said.

&#8220;Seven [attacks] a day occur where we can engage the enemy and kill them in a near battle, and they last about a minute to two minutes,&#8221; said Sanchez.

&#8220;Now tell me that I have a strategic or an operational or a tactical problem here in this country when I have got 160,000 troops on the ground. Absolutely not. There is no risk at any of those levels.&#8221;

For the individual soldiers on the ground, however, the risk is very real.

More troops have been killed or wounded since the U.S. invasion of Iraq began than in any U.S. conflict since Vietnam.

With attacks coming as swiftly as they do randomly, fear can be a constant companion for many soldiers. But that fear, say some, can give them an edge.

Army psychologist Capt. Marc Houck, who heads a Combat Stress Control Team with 4th Infantry Division in Tikrit, added that attacks from anywhere can add to soldiers&#8217; worries. &#8220;There is no front line here &#8212; you walk out the gate and you&#8217;re in the front lines. Even inside the gates, we&#8217;re getting mortared every day.&#8221;

Soldiers know that blood and death come with the job. But what is increasingly exasperating for many troops is they said they feel like they&#8217;re taking a lot more licks than they&#8217;re dishing out.

The casualties, said Linnington, &#8220;tend to make leaders at all levels angry at those we are attempting to help.&#8221;

The key, he added, is to avoid getting baited into overreacting.

&#8220;The best thing to do is give yourself and your soldiers time alone to think about it and reinforce to them it is the few trying to get us to overreact to the many,&#8221; said Linnington.

Even when soldiers get a chance to go after the enemy, no one is there to count casualties.

One morning in August, Johnson shaves after grabbing a few hours sleep. He had spent most of the night hidden in the thick vegetation along the Tigris River with fellow soldiers waiting for enemy attackers trying to sneak up on his company&#8217;s field site.

The night before, Johnson was among a group of soldiers who caught three fighters laden with RPGs sneaking in toward the company&#8217;s position.

Unleashing a barrage of automatic weapons fire, Johnson and the rest of the soldiers killed one. They found blood trails in the morning indicating they wounded at least one more.

Company commander Capt. Ned Ritzmann said the ambush was a turning point for his men.

&#8220;The biggest value of our ambush the other night was that it showed everyone that the bad guys are not invulnerable. That we can take the fight to the enemy.&#8221;