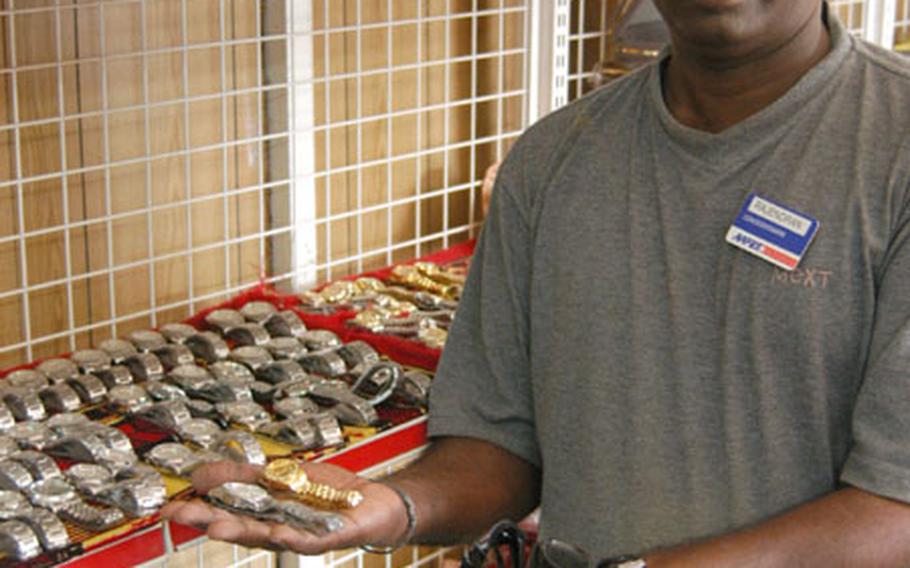 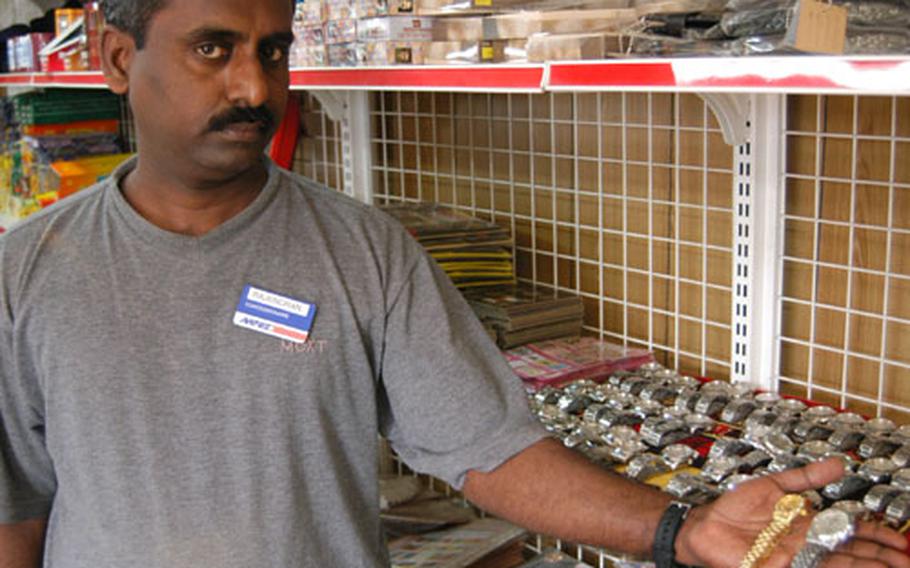 BAGHDAD &#8212; Army and Air Force Exchange Service concessionaires and &#8220;haji shops&#8221; are selling counterfeit products on U.S. bases in Iraq, even though AAFES says the selling of &#8220;knockoff&#8221; merchandise is not authorized.

Counterfeit products &#8212; ranging from fake watches to bootleg DVDs &#8212; are on sale at U.S. military bases all over Iraq.

At Camp Warhorse, near Baquoba, north of Baghdad, a large indoor souk has been established in the Morale, Welfare, and Recreation facility. There, soldiers can buy fake watches and sunglasses, copies of major European soccer teams&#8217; shirts, and various other items, including thousands of illegally copied DVDs.

The DVDs, which sell for between $5 and $7, are one of the most popular knockoff items sold. Soldiers report that the movies are sometimes low-quality reproductions made by people holding camcorders in theaters. But most are as good as genuine DVD titles, troops said.

&#8220;AAFES and its concessionaires strive to provide quality merchandise and service,&#8221; she said.

&#8220;Customers who note any oversight in our strict quality control should bring that to the attention of the local service business managers or AAFES team leader on site for immediate resolution,&#8221; she said.

Stroudemire said AAFES has noted that some Army units have arranged for concession operations with local vendors without coordination through AAFES.

&#8220;These vendors would not be governed by the same contractual agreements that AAFES places on the concessions it brings onto unit sites,&#8221; she said.

However, the cashier at the Baghdad airport gift shop, Leo Cutinho, said the &#8220;Rolex&#8221; watches he was selling were fakes.

The hottest selling items at the store are objects with Saddam Hussein&#8217;s face on them, he said. Soldiers returning from Operation Iraqi Freedom are snapping up Saddam cigarette lighters, watches, bank notes and T-shirts, Cutinho said.

AAFES could not comment on the legalities of transporting counterfeit items into the United States, Stroudemire said.

At Q-West base in northern Iraq, 5th Battalion, 20th Infantry Regiment commander Lt. Col. Karl Reed said it had not occurred to him that the sale of counterfeit goods on his base was an issue. He said he had ejected some Iraqi retailers whose prices were too high.

Reed said his concern was providing his soldiers with things they needed to survive in Iraq and that worrying about whether products were genuine was low on his list of priorities.

MOSUL, Iraq &#8212; At Firebase Aggie, south of Mosul, soldiers from the 5th Battalion, 20th Infantry Regiment&#8217;s Company B do not have much to do in their spare time.

Most work out in the makeshift gymnasium or shoot targets at the range next to their barracks.

A mobile post exchange from the Army and Air Force Exchange Service visited once, but soldiers were disappointed when they found it did not stock U.S. tobacco products and sold high-priced DVD players, they said.

Many soldiers said they have resorted to buying bootlegged DVDs from concessionaires.

Cpl. Sam Heron said he often buys pirated DVDs, which vary in price from $4 to $8.

The Company B soldiers have no pangs of guilt over watching pirated DVDs in Iraq.