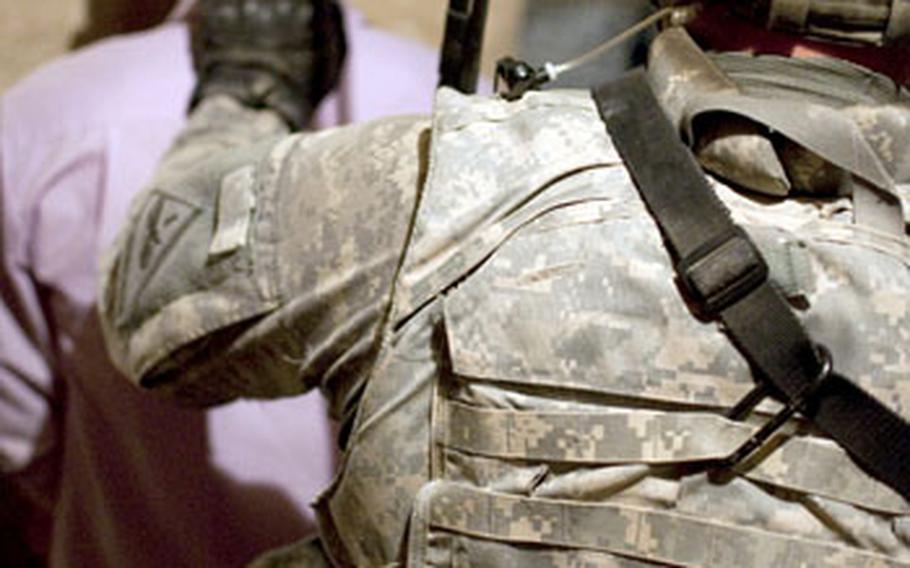 A U.S. soldier keeps control over a man arrested by Iraqi police after they obtained a video of him preparing to fire a rocket on a U.S. base. The police said they believed the man was a member of al-Qaida. (Michael Gisick / S&S)

A U.S. soldier keeps control over a man arrested by Iraqi police after they obtained a video of him preparing to fire a rocket on a U.S. base. The police said they believed the man was a member of al-Qaida. (Michael Gisick / S&S) 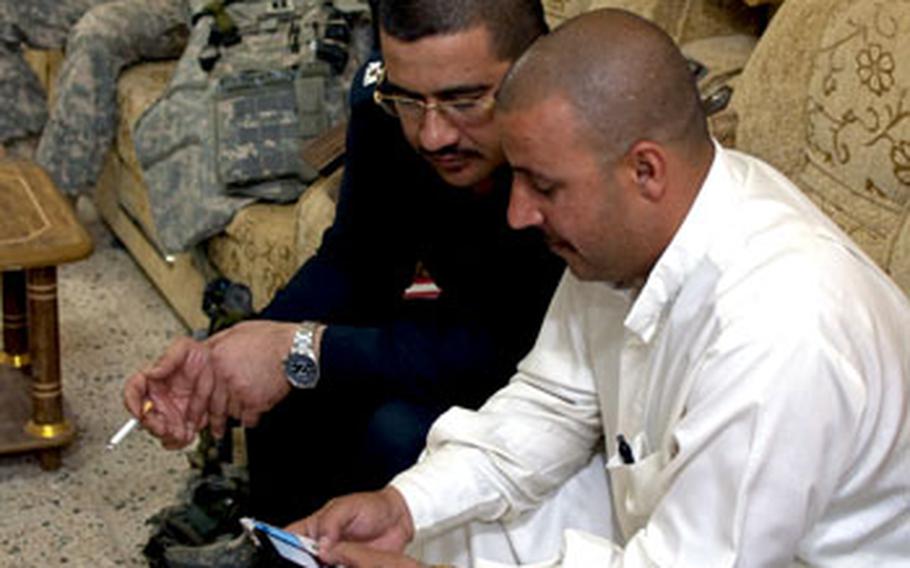 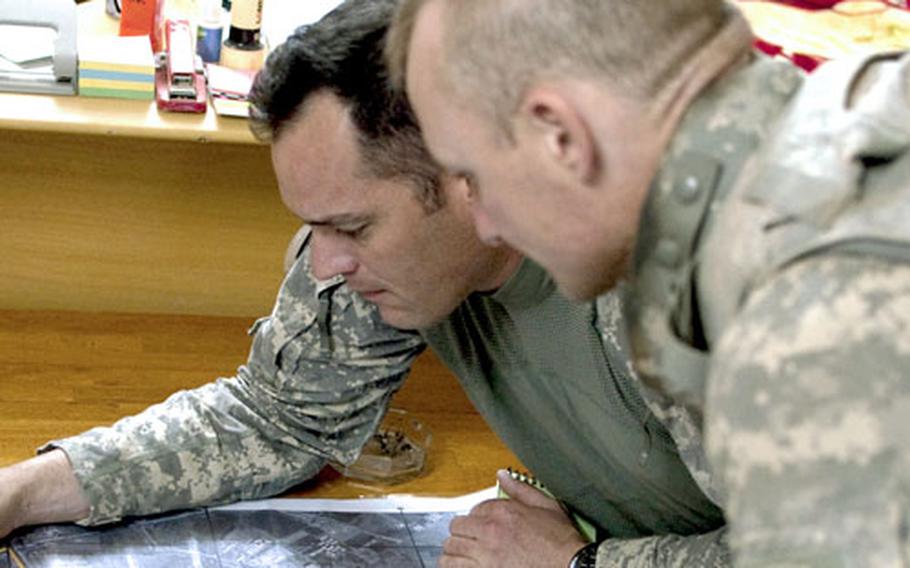 U.S. Army Capt. Scott Wares, left, and Staff Sgt. James Davis plan a route for a raid to be conducted with Iraqi police in the northern town of Hawijah. (Michael Gisick / S&S) 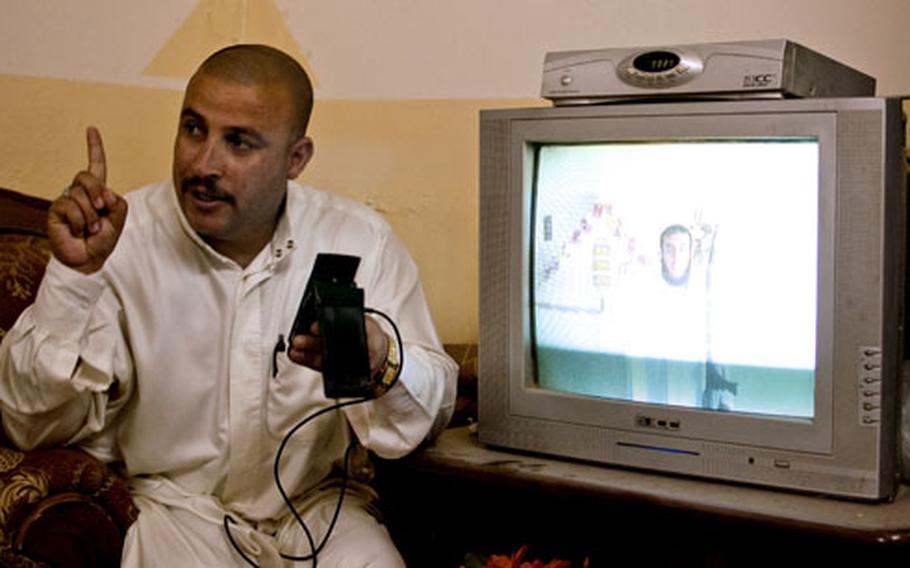 Iraqi Police Sgt. Maj. Jassim Mohammed Ali al-Tikriti shows American troops a cell phone video of a man apparently preparing to fire a rocket at a nearby U.S. base. Though violence has dropped precipitously in this one-time insurgent stronghold, the American base, FOB McHenry, takes incoming fire once or twice a week. (Michael Gisick / S&S) 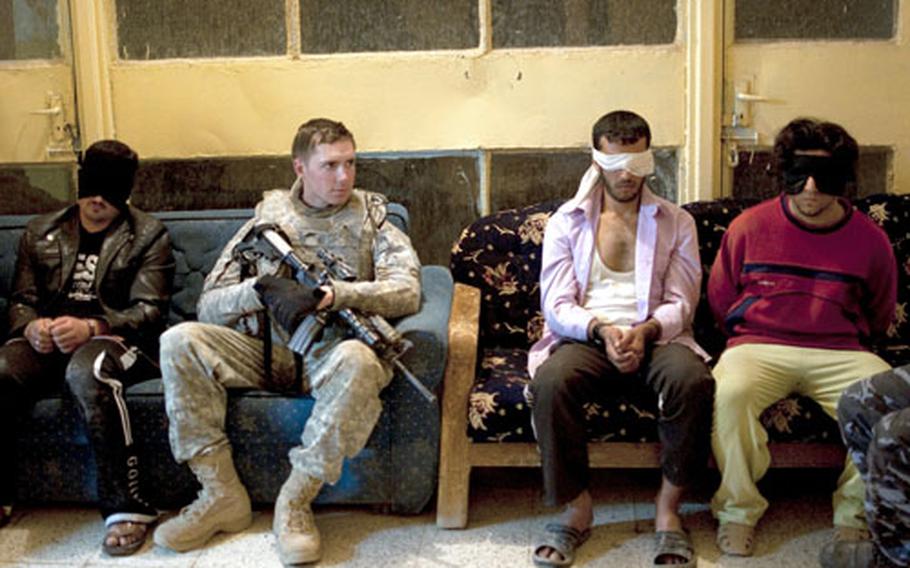 Men arrested during a joint raid in Hawijah sit in the lobby of the local police station. The man at far right, picked up after cutting off a police officer in traffic, was later released. (Michael Gisick / S&S)

HAWIJAH, Iraq &#8212; He may be relegated to using carbon paper to copy documents. His men might have to ride around in pickups with mini-bus seating bolted into the truck beds. But when it comes to using a cell phone as a tool of law enforcement, &#8220;Awesome Jassim&#8221; is on the cutting edge.

Hundreds of bewildered suspects stare out from his phone&#8217;s memory card, their mug shots snapped at crime scenes across what remains among the more restive towns in northern Iraq.

On this afternoon, however, it&#8217;s the jerky video showing two men preparing to launch a rocket toward a nearby U.S. base that has caught the attention of the American troops who gave Iraqi Police Sgt. Maj. Jassim Mohammed Ali al-Tikriti his nickname.

It&#8217;s not clear how he got the video, how long he&#8217;d had it or why he decided to show it to them now, but Awesome Jassim pulls a cable from the desk next to his cot and hooks up his phone to a television so they can see it better. On the screen, a bearded young man holding a rocket-propelled grenade launcher addresses the camera.

Over the next few hours, the U.S. troops would prod the Iraqis into action without asking too many questions, eventually leading to the arrest of the bearded young man. The man added to the Americans&#8217; quiet suspicions about what was going on by claiming that an Iraqi police officer filmed the rocket video.

It was, in many ways, a telling scenario. The police remain a key player in Iraq&#8217;s bruising brand of local politics, where economic competition, tribal loyalties, a vaguely defined legal system and a lingering insurgency come together, in the Americans&#8217; way of putting it, like a mafia drama.

But as U.S. troops navigate their way out of the country, the relative success of Iraqi forces at maintaining security on their own terms has largely overshadowed whatever concerns the Americans might have about how exactly the Iraqis operate. Besides, with virtually no legal authority over Iraqi units, American troops can&#8217;t do much more than provide a good example, officers say.

After watching the video a couple times, Wares urged an immediate raid. The way he had it figured, Mohammed hadn&#8217;t meant to show the Americans the video but couldn&#8217;t resist sharing such juicy material. Among other things, Wares argued to Mohammed that a reporter would love to see the Iraqi police in action.

By 7 p.m., as twilight settled over the dusty town, Mohammed had set off in his civilian car to do surveillance on the house of the bearded man, named Ra&#8217;ad. By 9 p.m., he returned triumphant. He said he&#8217;d happened across the other man from the video on the street and had detained him, a coincidence that prompted sidelong glances from several of the Americans. He&#8217;d also detained a man who cut him off in traffic, he said.

While Mohammed and another officer spoke on the phone with a judge to obtain a verbal warrant for the raid, most of the two dozen American troops from Wares&#8217; Headquarters Company, 1st Battalion, 37th Armor Regiment waited in the police station courtyard. Staff Sgt. James Davis led a joint rehearsal with the Iraqi police, emphasizing that they would be the ones kicking in the door if it came to that. The Americans are not allowed to kick in doors anymore, he said.

Wares, whose troops face an increasing number of competing priorities as the U.S. begins to disengage from Iraq, said he&#8217;s often playing catch-up with the police. After a car bomb injured one policeman on March 22&#8212; the first car bombing in this one-time insurgent stronghold in nearly two years &#8212; the police began making arrests within a week. A few days later, they extracted confessions that led to the arrest of a Northern Oil Company executive in Kirkuk whom police describe as a regional commander with the Islamic State of Iraq, an umbrella group of Islamist insurgents that includes al-Qaida.

The police commander here, Col. Fattah Mohammed Yassin, said the Americans helped with forensics, but Wares played that down.

But as the case of the rocket video illustrates, the Americans still play a role as a motivator &#8212; and sometimes moderator.

Before they left for the raid, Wares and several Iraqi officers visited the two detained men sitting blindfolded on the floor of the station jail. After exchanging a few words in Arabic, an Iraqi officer slapped one of the men on the head. Wares told him to stop.

The raid itself went smoothly and with the Iraqis firmly in the lead, as U.S. commanders are fond of putting it. The Americans&#8217; massive Mine Resistant Ambush Protected vehicles got tangled up in low-hanging electrical wires and the Iraqi police trucks &#8212; mini-bus seats and all &#8212; arrived well in advance. There was no need to kick in the door. Ra&#8217;ad and two other young men sat inside waiting for a soccer match between Barcelona and Real Madrid to come on the television.

Wares, when he arrived, calmly directed female family members from one room to another as troops searched the house, eventually finding more than a dozen cell phones and SIM cards &#8212; the portable memory chip that keeps a phone&#8217;s information &#8212; a loaded pistol and a blasting cap in a cabinet. Wares remained respectful. A veteran of battles in Sadr City on his last tour, he said he was trying out more of a &#8220;Captain Friendly&#8221; persona this time.

While a U.S. soldier struggled to work a camera that takes retinal photographs and fingerprints, Mohammed circulated the scene snapping mug shots with his cell phone.

Off to the side, Ra&#8217;ad told American troops the rocket video had been taken by an Iraqi policeman. His two friends, meanwhile, tried to joke around with officers &#8212; until hoods were put over their heads. The three were loaded up and taken back to the station.

Within two days, Mohammed and his men had arrested three more suspects, one of whom, they said, confessed to taking the rocket video. He was not an Iraqi policeman.

But that came after the Americans had left, with Wares busy at his base sorting through reconstruction projects.

The man who&#8217;d been arrested for cutting Mohammed off in traffic was set free after signing a statement promising to drive more respectfully in the future. The four others sat blindfolded on some couches in the station foyer. On this night, things had gone as well as they can go in Iraq.