In Iraq, 1st AD is 'improving the foxhole' 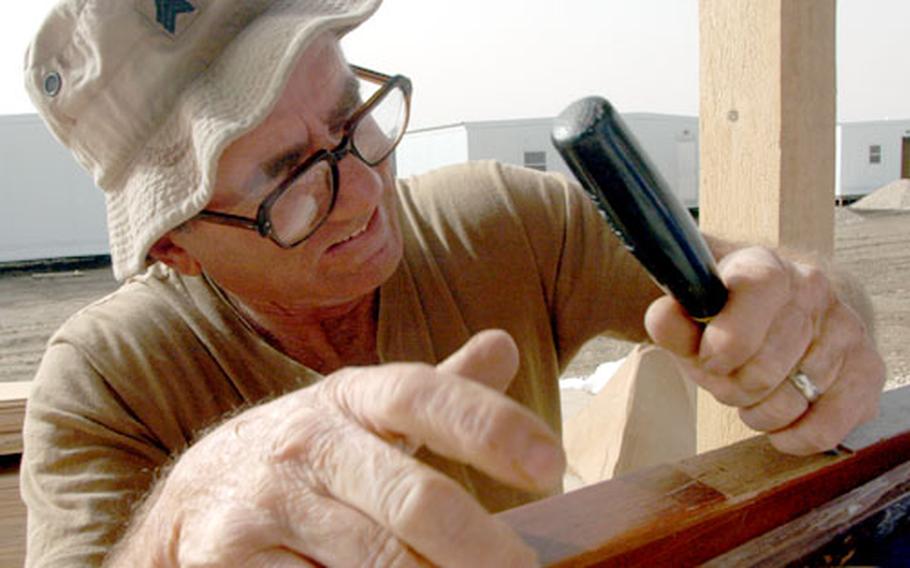 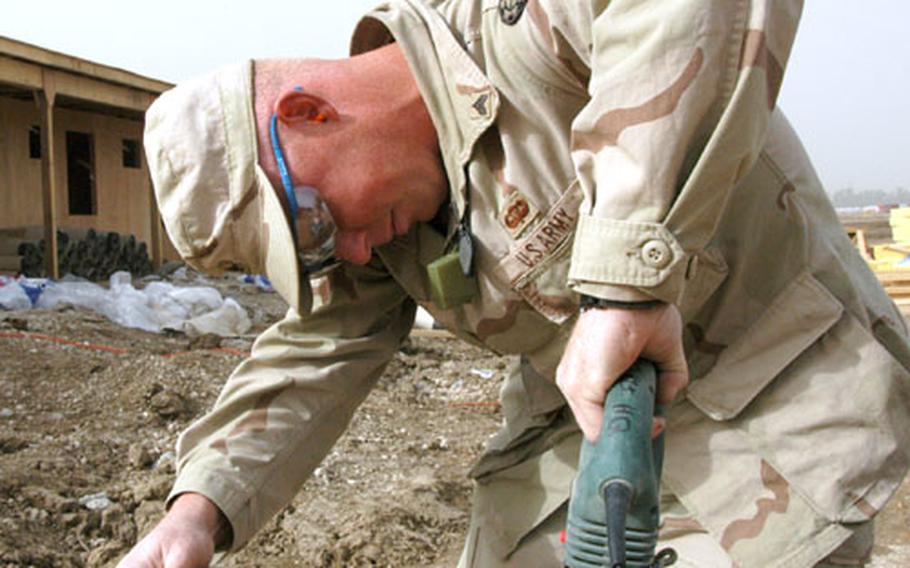 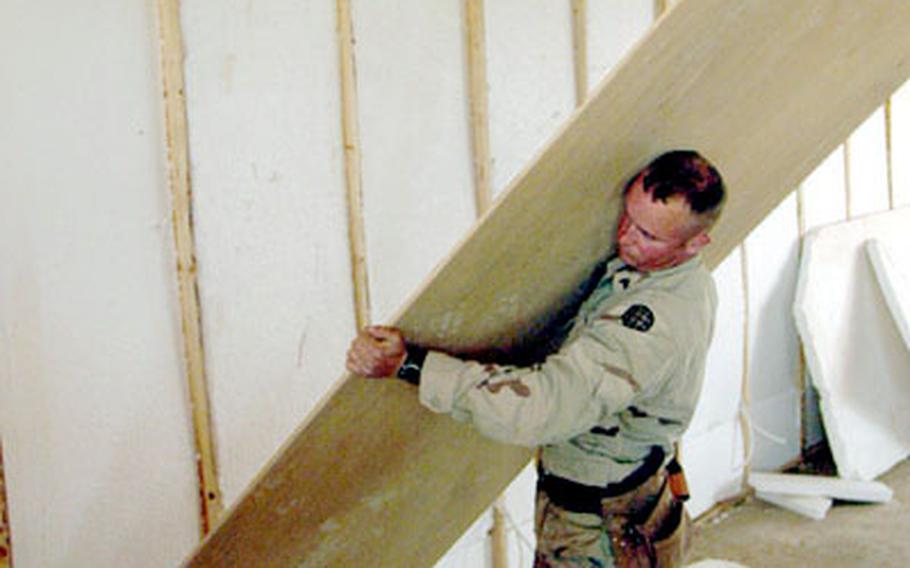 BAGHDAD &#8212; Engineers from the 1st Armored Division are midway through an $800 million project to build half a dozen camps for the incoming 1st Cavalry Division.

The new outposts, dubbed enduring camps, will improve living quarters for soldiers and allow the military to return key infrastructure sites within the Iraqi capital to the emerging government, military leaders said.

The largest of the new camps, Camp Victory North, will be twice the size of Camp Bondsteel in Kosovo &#8212; currently one of the largest overseas posts built since the Vietnam War. Camp Victory North lies northeast of Baghdad International Airport, known to troops as BIAP.

About 16,000 soldiers from the Germany-based 1st Armored Division currently live in a makeshift camp along the south side of BIAP.

Subordinate brigades and battalions are scattered on three dozen forward operating bases throughout the city. Old Ironsides fell into former Iraqi regime property taken early in the war by the 3rd Infantry Division. They live in palaces, prisons, government buildings and amusement parks.

The new camps being built around Baghdad were planned by the Base Camp Coordination Authority, a planning cell made up mostly of Army Reserve soldiers, said Maj. Jack Otteson, 40, a civil engineer from Fort Worth, Texas.

At first, the division engineers built up the camp south of the BIAP runway. In September, word came down to cease construction because the airport would be returned to the Iraqi ministry of transportation.

&#8220;Our charge is to get off BIAP by the spring and turn the airport over to civilian authority,&#8221; Otteson said.

Most of the tent cities along the runway and the Bob Hope Dining Facility will close. Only the Iraqi Civil Defense Corps will remain at the airport, Otteson said.

Engineers turned their sights to land behind nearby Camp Victory, a former hunting reserve for Saddam Hussein. The best view is from a man-made hill created from soil removed from a man-made lake nearby, said Sgt. Justin Petersen, 22, of Rock Springs, Wyo., who is Marich&#8217;s driver. Every few days, Petersen drives visitors up the hill for a look.

Tall reeds and palms line the roadside into the camp. Each day, seemingly endless convoys of civilian dump trucks drop off 300 loads of gravel used to harden the wetlands.

Already, several hundred mobile trailers, to be used as soldiers&#8217; living quarters, are laid out in rows. Each soldier will have 80 square feet of living space. Rooms inside the trailers will have beds, a table and lamp, and a closet. Between the two rooms, within each trailer, soldiers will share a shower, sink and toilet.

The Army and Air Force Exchange Service has built two structures, each larger than a circus tent. Kellogg Brown & Root workers also have a slice of the camp. They will continue to provide soldiers with food, morale programs and base maintenance.

About 100 Missouri National Guard troops from the 203rd Engineer Battalion recently built the first of seven headquarters buildings. But they are making slow progress on the long wooden structures, known to troops as SEAhuts, said 1st Lt. John Myers, 30, of Kansas City, Mo.

Some problems persist: Doors ordered for the project don&#8217;t fit frames, Myers said. Insulation is cut to the wrong size; some concrete blocks crumble, he added. The lumber comes mostly from Germany and Canada, he said. The electrical supplies come from all over. Most of the time they must convert metric measurements to standard.

The citizen soldiers often rely on skills acquired on civilian construction jobs, said Myers, who manages a grocery store back home. About 20 percent of his crew are civilian builders.

While Camp Victory North is the division&#8217;s largest endeavor, work continues on several other camps.

North of the city, about 5,000 troops will live in Taji, a former Iraqi base. To the east, camps Dragoon and War Eagle combined will have room for about 2,200. In Al-Rastimiya, the former Iraqi officers war college sits on what troops now call Camp Muleskinner. About 2,100 U.S. troops will share the base with the new Iraqi army. At Camp Falcon, on the southern outskirts, a base camp for 5,000 is planned.

Meanwhile, soldiers from the Fort Hood, Texas-based 1st Cavalry Division begin arriving in late January and will continue to flow in through March. The transfer of authority between 1st AD and 1st Cavalry is scheduled for mid-April. The incoming soldiers will occupy the new camps.

Moving to the outskirts of town will allow Iraqi police and the Iraqi Civil Defense Corps to take a lead role in the city&#8217;s security, said Brig. Gen. Mark Hertling, 1st AD deputy commander. Building new camps also allows the Army &#8220;to move out of places Iraqis want back,&#8221; he said.

Hertling is coordinating with various ministry officials for the transfer of places such as the Martyr&#8217;s Monument, Baghdad Island amusement park and government buildings.

The moves may also improve the city&#8217;s gridlock traffic, senior 1st Armored Division officials said. The number of cars more than doubled to 1.2 million in the past year. Removing barriers near bases within the city should help alleviate some traffic jams.

Already the Army has spent about $300 million of the overall $800 million price tag, Otteson said. A similar construction project in the States would take two years, he said. Army planners expect to finish by March 15.

The rush to finish the camps places a huge burden upon the Army&#8217;s engineers. Yet work progressed steadily over the past few months.

Soldiers call the process &#8220;improving the foxhole.&#8221; Basically, troops always try to make living conditions better for themselves and forces that follow.