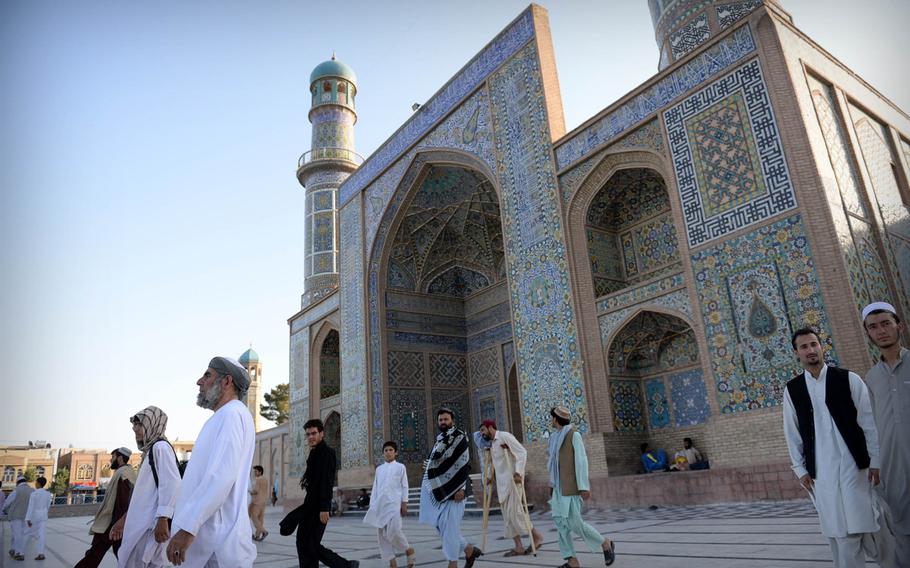 Buy Photo
Men leave the Jama Masjid, a mosque in downtown Herat, after Ramadan prayers. Residents of this city in western Afghanistan say they favor keeping international troops in their country as a bulwark against both internal insurgents and neighboring countries. (Josh Smith/Stars and Stripes)

Buy Photo
Men leave the Jama Masjid, a mosque in downtown Herat, after Ramadan prayers. Residents of this city in western Afghanistan say they favor keeping international troops in their country as a bulwark against both internal insurgents and neighboring countries. (Josh Smith/Stars and Stripes) Buy Photo
Men wait to meet with the governor of Herat province in western Afghanistan. Both provincial leaders and local residents say they favor keeping international military forces in their country past the end of 2014. (Josh Smith/Stars and Stripes) Buy Photo
Herat provincial governor Sayed Fazlullah Wahidi says he favors keeping international troops in Afghanistan because of lingering weaknesses in the Afghan security forces, but he wants to see the language of a final agreement between the U.S. and Kabul before publicly endorsing the deal. (Mohammad Aref Karimi/Courtesy to Stars and Stripes)

“What kind of question is that? Everyone wants them to stay,” he said of the international troops who have been deployed to Afghanistan since the 2001 U.S.-led invasion that toppled the Taliban regime.

The 49-year-old shopkeeper, who, like many Afghans, goes by one name, said only warlords and others who would profit from a disintegrating Afghanistan want foreign troops to depart entirely.

It’s unclear how many Afghans share Mohammed’s sentiment. Many of those who do seem most concerned that, without foreign forces, Afghanistan’s internal security will worsen and encourage interference by neighboring countries.

Many in Afghanistan fear the Taliban insurgency will gain strength and further destabilize the country once foreign troops leave. But residents of Herat have a unique vantage point because of their proximity to Iran, which has been accused of giving support to both the Taliban and the national government in pursuit of its own interests.

Tehran is a vocal opponent of any long-term presence of international troops in Afghanistan, accusing the NATO-led coalition of only exacerbating the conflict — the Taliban say they are fighting to remove foreign troops they describe as occupiers. But residents approached recently in Herat fear the contrary — that the Taliban will gain strength without international troops to back Afghan security forces.

Mohammed, standing in his convenience store, the shade only marginally cooler than the blistering summer heat outside, underscored that concern. Gesturing toward people passing by on the street, he said: “That man there? [The Taliban] will make him grow a beard again. As soon as foreign troops are gone, this country will be done.”

As the United States and the rest of the coalition prepare to withdraw the majority of their combat troops by the end of the year, opinions among Afghans regarding foreign troops remain complicated, often based on a personal calculation to determine the lesser of many evils.

For the Afghans who support a prolonged international military mission, their views seem to be based on a combination of fear that internal security could deteriorate and concerns about interference by neighboring countries. In Herat, on Afghanistan’s western border, that means Iran.

“[International troops] should not leave while we are in this situation, when we have foreign enemies,” said farmer Abdul Razaq, 55. “All Afghans understand it is better to keep the U.S. here. The majority, 98 percent of my friends, agree that the U.S. should stay here for a long time.”

Herat’s long history as a center of trade has, in many ways, made it more accustomed to foreigners than some of the more remote areas in Afghanistan. The area has also been spared the major fighting seen in the eastern and southern areas of the country, although the Taliban have staged attacks on high-profile targets in the city, including the American consulate.

Estimated to be Afghanistan’s third-largest city, Herat is situated less than a two-hour drive — about 60 miles — from the border with Iran.

In the cities and towns of Afghanistan’s western deserts, neighboring Iran has played a “soft-power” game, pumping more than half a billion dollars into aid projects.

But Tehran’s overtures and lobbying on security issues have been largely overshadowed by what some see as heavy-handed treatment by Iran, said Mohammed Younas Fakor, a political analyst based in Kabul.

“The distrust is mainly because of Iran’s behavior toward Afghanistan,” he said. “The people of Herat witness everything from very close: How Iran forcefully deports Afghan refugees; kills them on the border; or they hang them without letting their families know.”

Although one would expect strong Iranian influence in Herat due to its proximity to the border, in reality there is not, Fakor said. “The people of Herat do not follow Iran’s agendas.”

Despite, or in some cases because of, living in Iran’s shadow, few Afghans in the region approached recently agree with Tehran’s opposition to the Bilateral Security Agreement that would lay out terms American and international forces insist on if they are to stay for at least several more years.

“If international troops stay here, our neighbors won’t bother Afghanistan,” said Mohammed Sabel, a 24-year-old student in Herat. “We need those soldiers to partner with the Afghan forces here.”

Current Afghan President Hamid Karzai has refused to sign the BSA, saying it will be up to his successor. Both leading presidential candidates have said they would sign the deal, but a dispute over the election results has indefinitely delayed the inauguration of a new president. Authorities in Iran have been among the few international leaders to publicly oppose even the limited American troop presence that has been proposed for after the end of 2014 — about 10,000 next year and drawing down to an embassy-based role in 2016.

“Politically, Iran seeks to maintain positive relations within the highest levels of [the Afghan government] while attempting to steer Afghanistan away from an enduring BSA with the United States,” the Defense Department said in its latest yearly report on Afghanistan, released in November. “In addition to maintaining a diplomatic presence in Afghanistan, Tehran often uses high-level visits and key leadership engagements to criticize the presence of international forces in Afghanistan and to call for the withdrawal of ISAF publicly.”

In February, Iranian Deputy Foreign Minister Morteza Sarmadi told a conference in Tehran that counterterrorism was just a pretext for “American warmongers” to attack Afghanistan.

“Now extremism has turned into a major problem and the U.S. invasion of Afghanistan has not only failed in uprooting terrorism but also spread it to the neighboring states,” Sarmadi said.

American officials accuse Iran of going so far as to funnel aid to the Taliban in an effort to oppose the Western presence in Afghanistan.

“Tehran’s relationship with the insurgency, though not ideologically based, is consistent with Iran’s short- to mid-term goal of undermining coalition efforts and opposing the international military presence in Afghanistan,” last year’s DOD report concluded.

Future involvement by Iran and other countries will always be an area of concern, said Herat’s provincial governor, Sayed Fazlullah Wahidi.

“The problems in Afghanistan are always from neighboring countries,” he told Stars and Stripes in an interview at his posh palace in Herat. “I think we must always be careful of our neighbors’ interference. Everyone tries to have a role in our poor country.”

He said he favors keeping international troops in Afghanistan to support the local security forces, but is waiting to see the language of the final agreement.

“We have shortages of military and police,” Wahidi said. “Our cities are protected by the police, but our police is very weak so we need some support, especially some air support. But first I want to see the final agreement. If we sign the agreement and they protect Afghanistan, then that is good.”