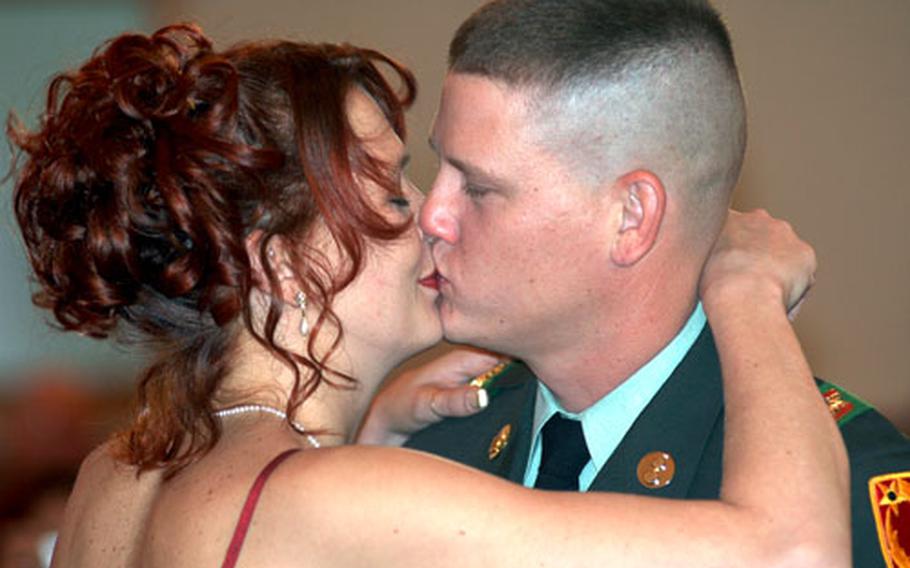 Sgt. Michael Collier and his wife, Dawn, kiss after renewing their wedding vows with six other couples at a ceremony Fridayat the Fliegerhorst chapel in Hanau, Germany. (Michael Abrams / S&S)

Sgt. Michael Collier and his wife, Dawn, kiss after renewing their wedding vows with six other couples at a ceremony Fridayat the Fliegerhorst chapel in Hanau, Germany. (Michael Abrams / S&S) 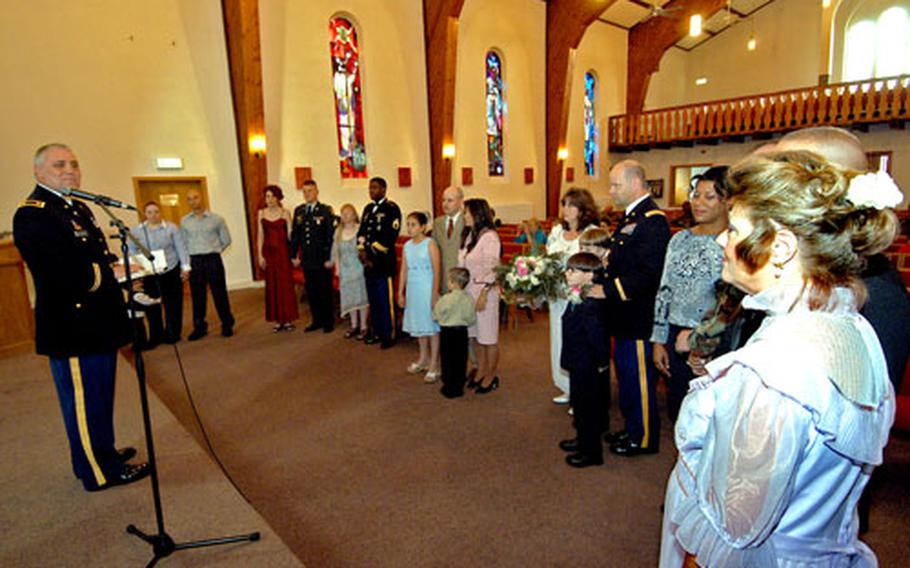 Chaplain (Maj.) H. Vernon McClearn, left, renews the wedding vows of, from left: Jennifer and Anthony Robertson with son Justin; Dawn and Michael Collier; Jill and Robert People; Maty and Dave Richards, with Heather and Clay; Kathy and Michael Harlan with Joshua and Ashton; Kerstin and Michael Thiel (not seen); and Todd (not seen) and Linda Benzschawel at a ceremony at the Fligerhorst chapel in Hanau, Germany, on Friday. (Michael Abrams / S&S)

HANAU, Germany &#8212; Despite the formalities, it was a somewhat unusual wedding ceremony.

The chaplain read from the book of Genesis, imparted wisdom and even cracked a few jokes. And in true Army fashion, Chaplain (Maj.) H. Vernon McClearn concluded by saying, &#8220;OK, you&#8217;re dismissed.&#8221;

Then again, perhaps there&#8217;s no better way to end a ceremony at which seven lucky couples renewed their wedding vows. Not because they had to, but because they wanted to.

The Friday afternoon ceremony at the chapel on Fliegerhorst Casern in Hanau drew about 20 well-wishers, including several of the couples&#8217; children. Afterward, there was a reception at the International Club on post, and food, drinks and cake were served.

Maj. Michael Harlan and his wife, Kathy, renewed their vows after 12 years of marriage. They attended the reception, but couldn&#8217;t stay too long.

Half of the eight soldiers (one couple are both servicemembers) are due to deploy to Iraq next month as members of the 16th Corps Support Group. Harlan, the group&#8217;s operations officer, will be among them.

&#8220;This was just the perfect time,&#8221; said Kathy Harlan, adding that she and her husband had been thinking of renewing their wedding vows for some time.

Two other soldiers are with the air defense unit, while the remaining two are with the 502nd Engineer Company, which returned from Iraq this week.

McClearn had the couples in stitches when he quipped that everyone was &#8220;grateful, first, that you have not killed each other&#8221; en route to the second trip down aisle.

While he was being facetious, the point was not lost on anyone who was there to &#8220;celebrate the gift of marriage,&#8221; as he called it.

It seemed appropriate that as the seven couples stood side-by-side to renew their vows, the sky above them was shifting between rain and sunshine. Marriage is never always sunny.