In Golestan, changing mission could mean troops must move on 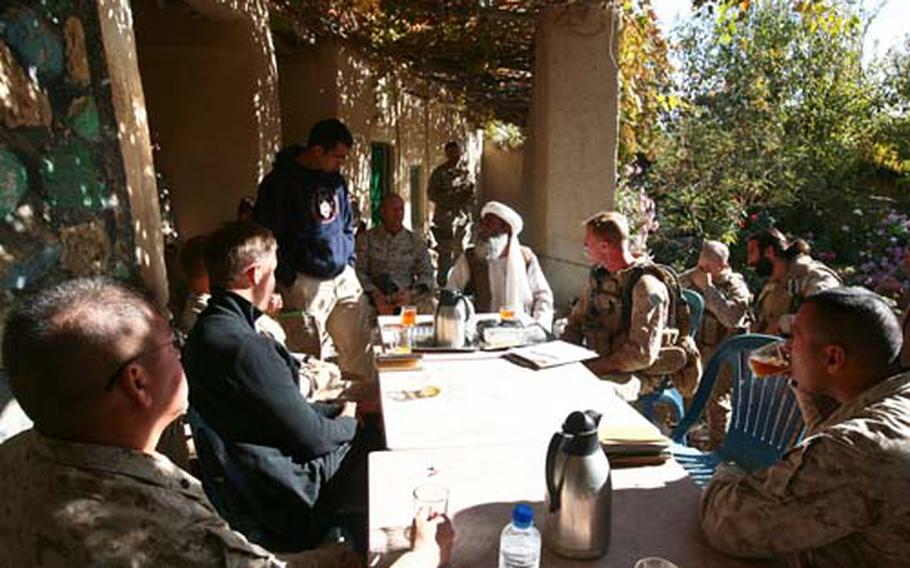 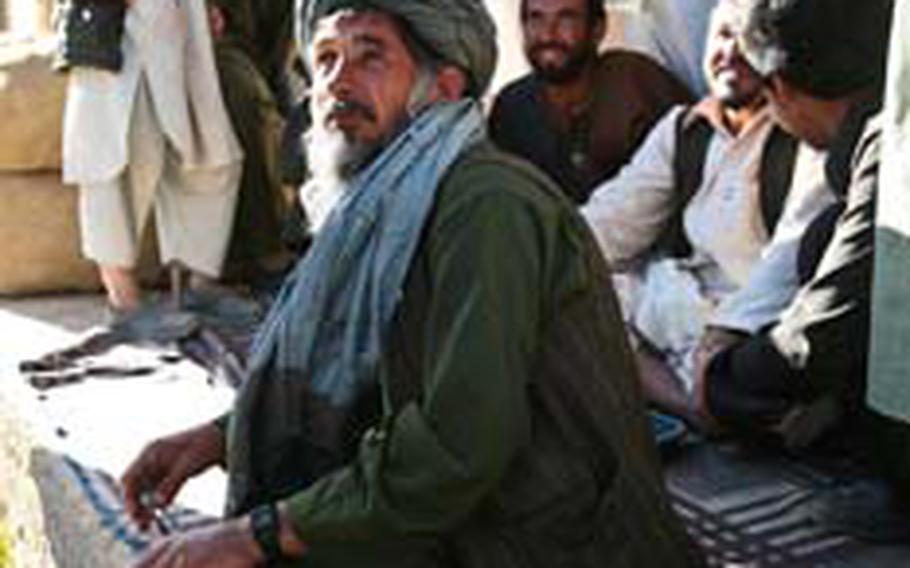 Men drinking tea in a village bazaar in the Golestan district of western Afghanistan&#39;s Farah province stop to greet U.S. Marines and civilian officials who visited the village to inquire about local issues and problems. The Afghans soon invited the men to sit and join them. (Drew Brown / S&S) Marines return to their base after visiting a nearby village bazaar. The base is among the most remote in the country, and the area is essentially peaceful, but strategic concerns may prompt the Marines to pull out of Golestan. (Drew Brown / S&S) 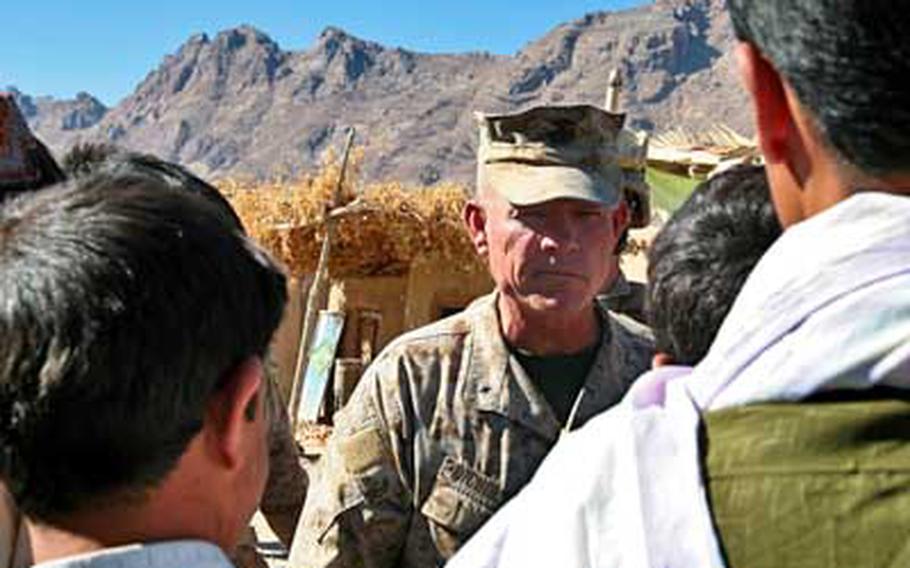 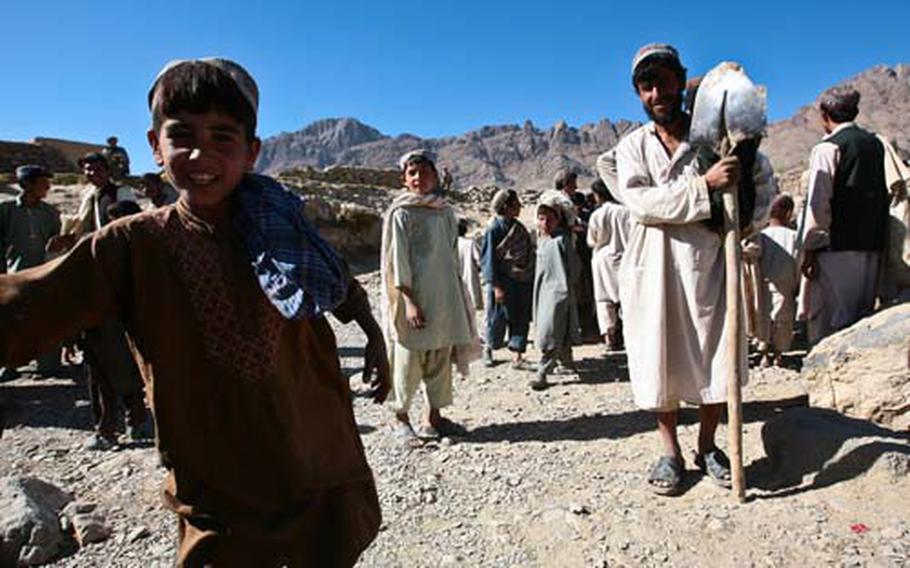 Virtually all work stops as villagers come out to greet or simply stare at a team of U.S. Marines and civilian officials. (Drew Brown / S&S)

When U.S. Marines first entered this stark, scenic valley nearly two years ago, their mission was to build up local security forces and eliminate the Taliban resistance.

But the Marines found precious few rebel fighters. And in recent months, the strategy for international forces has shifted from chasing down the Taliban to protecting Afghan civilians.

The change in mission has left the Marines in a quandary. Golestan, in Farah province in western Afghanistan, is their most remote outpost. And with an estimated 54,000 people scattered among more than 150 villages, the valley hardly qualifies as an important district under the counterinsurgency strategy laid out by U.S. Gen. Stanley McChrystal, the overall commander of international forces in Afghanistan, this summer.

Marine commanders are wondering: Now that they have been committed to Golestan for the past two years, how can they just leave?

&#8220;Is it strategically important? Not really,&#8221; said Capt. Ryan Benson, whose troops from Company I, 3rd Battalion, 4th Marine Re were recently posted at a small base in the valley. &#8220;But at this point, it would probably do more harm than good if we pulled out of here.&#8221;

Last week, a team from the 2nd Marine Expeditionary Brigade headquarters visited Golestan to examine whether those troops &#8212; along with forces at Bakwa, another isolated Marine outpost much further south &#8212; should be used elsewhere.

Set amid a sweep of cragged peaks that run 40 miles from north to south and stretching just three miles across, the Golestan valley has been one of the most peaceful areas for the Marines since they deployed to western Afghanistan in March 2008.

There has not been a single attack on American troops in the north end of the valley, where the base is located, and villagers there are generally friendly and supportive, the Marines said.

Taliban activity has been confined primarily to a narrow pass known as the Buji Bast, about 10 miles south. Bombs have struck several Marine and Afghan police convoys in the pass, but it is an open question whether those planting the bombs are Taliban fighters or simply disaffected tribesmen, Kelly said.

Weapons, grenades and more than 2,000 pounds of ammonium nitrate, a key component for homemade bombs, were seized in the pass last month, but the attacks continued.

Earlier this month, an Afghan police convoy was struck by a bomb in the Buji Bast, killing at least one police officer and wounding another four, Marines said. The Marines now ferry in all of their troops and supplies by helicopter.

Still, a two-day visit to outlying hamlets found many villagers seem to regard the Marines as a stabilizing force in the valley. Many expressed hope they will help deliver services that the Afghan government has not.

Others, however, wondered why after eight years of the coalition&#8217;s involvement in Afghanistan, their lives have yet to improve. Many seemed to have little regard for the Afghan government, which they routinely described as corrupt.

A U.S. State Department official working with the Marines sat down to share cups of tea with several men in a village bazaar close to the base. The village was safe enough that the official did not wear a helmet or body armor. The official asked the men if there were problems in the village.

The men responded politely to the official, but it was clear that they had heard these types of questions before.

There is no paved road between the Golestan valley and the outside world. Most villages are clustered along a wide wadi, or dry riverbed, that runs the length of the valley.

Construction is supposed to start as soon as next summer on a gravel road, dubbed Route 522, that would link the Golestan to the town of Delaram, about 25 miles to the south, according to Farah reconstruction officials. But villagers remain skeptical, having heard such talk for years, the Marines said.

Construction of the road &#8220;would turn the fight here more than anything else,&#8221; Kelly said. Tribal elders up and down the valley tell the Marines their villages stand ready to help provide security for its construction.

Benson, the company commander, said the primary goal of the Marines in Golestan is to secure the Buji Bast so that construction can begin.

He said Marines need to stay in the valley until the road is finished.