In Germany, volunteers and athletes form bonds during Special Olympics 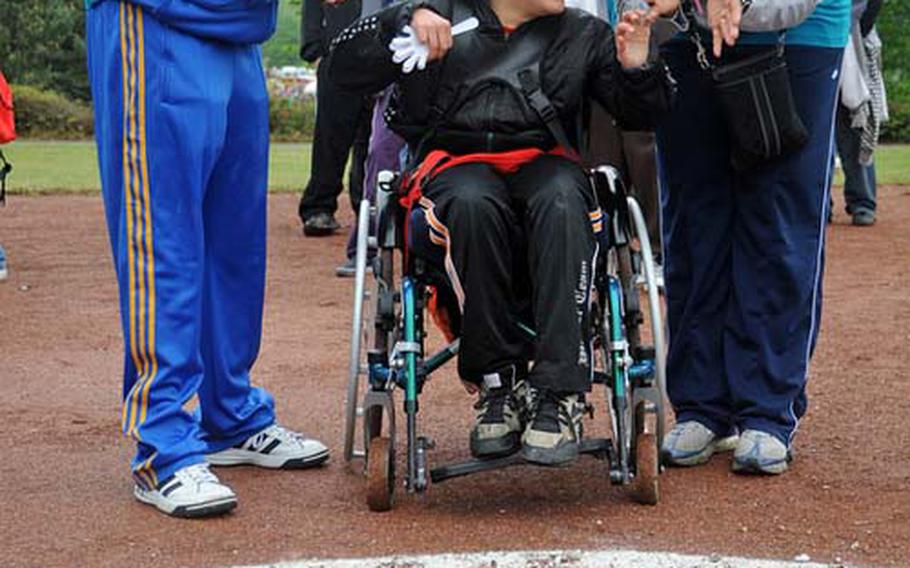 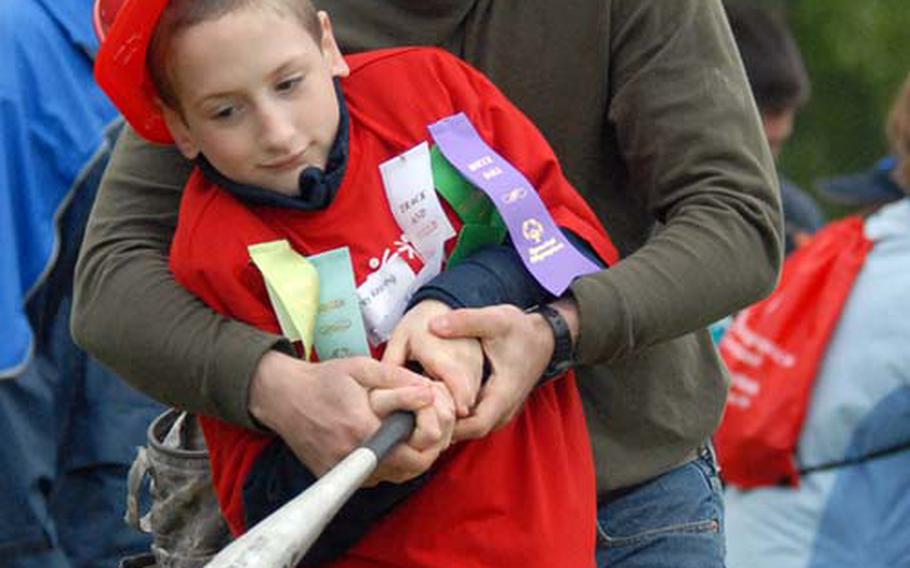 Jeffrey Keating gets a little help on his swing from dad Jeff at the T-ball station. (Michael Abrams/S&S) 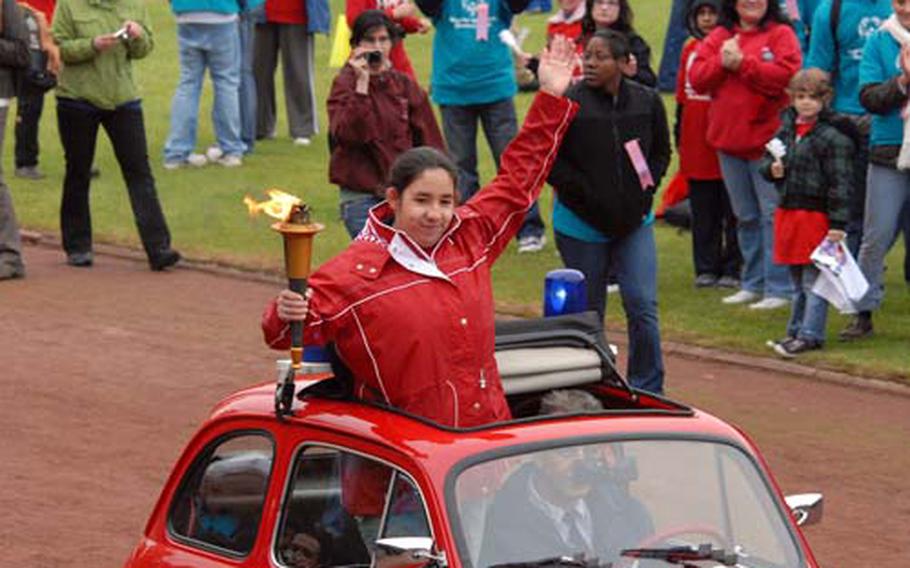 Brenda Guzman waves to the crown as she brings the Special Olympics torch into the stadium during the opening ceremony. (Michael Abrams/S&S) 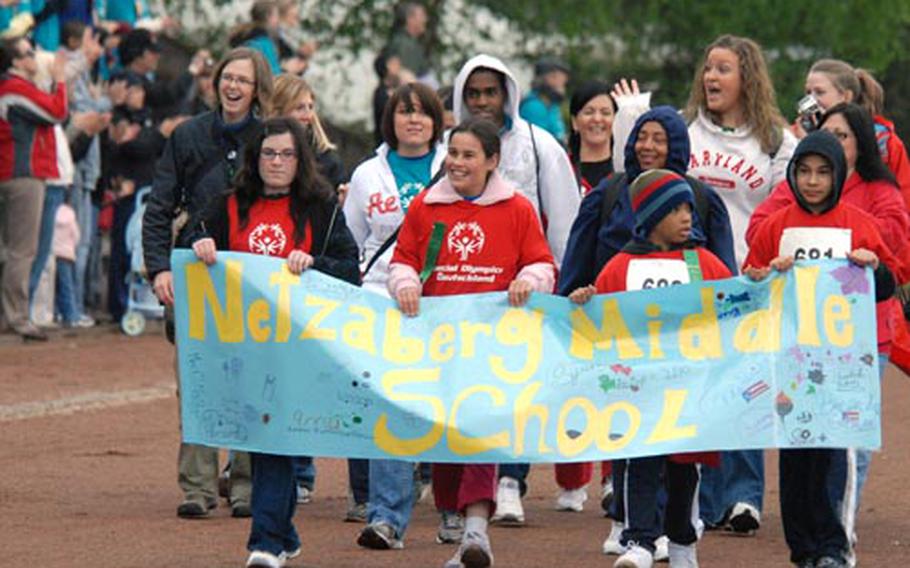 Athletes from Netzaberg Middle School in Grafenwöhr, Germany, march into the stadium during the opening ceremony at the 27th Kaiserslautern Special Olympics in Enkenbach-Alsenborn, Germany. About 800 athletes and twice as many volunteers participated in the event hosted by the Kaiserslautern military community and the German police academy in Enkenbach-Alsenborn. (Michael Abrams/S&S) 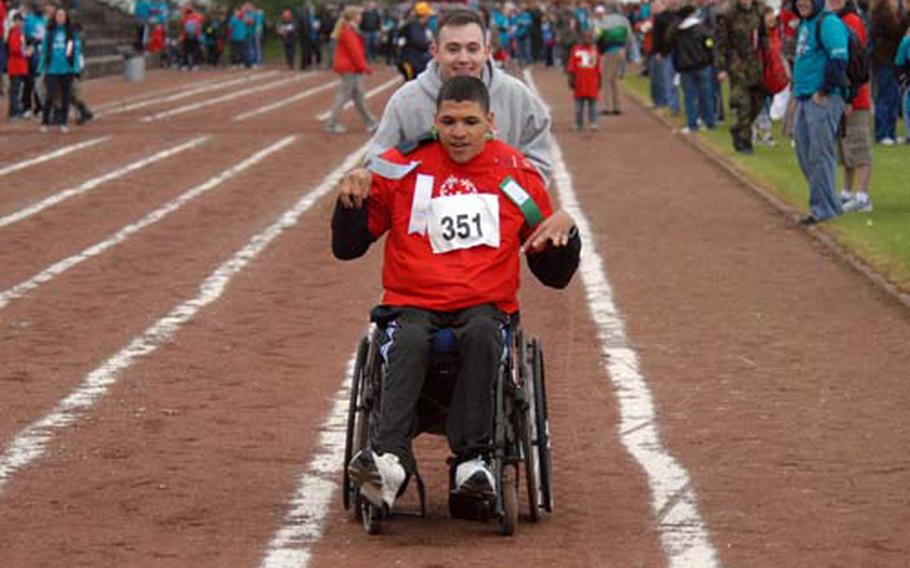 Franke, determination furrowing his 39-year-old brow, walked right past the line, up to the edge of the sand pit &mdash; and hopped.

His mark was a few inches, but still a triumph.

"He keeps hugging on me," said Czap, of Ramstein Air Base, volunteering for his first Special Olympics since high school.

Like Czap, many of the 1,650 American and German volunteers at the 27th annual Special Olympics on Wednesday formed an immediate bond with their athlete, despite not always being able to communicate with words.

Air Force Staff Sgt. Gerard Magee, 25, of Ramstein, and his wife, Catalina, were a little unsure of how things would go with 10-year-old Jonathan Taylor of Vogelweh. But Taylor, a boy of few words, eased those fears when introduced to his "buddies."

"He just came over and gave me a hug and a kiss on the stomach," Gerard Magee said.

Before long, Jonathan was getting a piggyback ride on the way to bocce ball, learning how to do a high-five and proudly carrying a pack of crayons.

The damp, cold German spring morning seemed to go unnoticed. Boisterous claps and cheers rang out when the 800 athletes began parading onto the track at the German Police Academy and only grew louder as the stadium torch was lit.

"When this day is over, everyone will be a winner," said Lt. Col. Kevin Hutchison, commander of the games&rsquo; host, U.S. Army Garrison Kaiserslautern.

The event, he said, was intended to help participants &mdash; who have cognitive disabilities &mdash; gain confidence and build a positive self-image that carries over into the classroom, home and job.

The athletes ranged in age from 4 to 60, with 19 Department of Defense Dependents Schools-Europe schools represented, according to Special Olympics organizers. Thirty-nine German schools and assisted living centers in Rheinland-Palatinate also sent athletes.