In Germany, a range too close for comfort 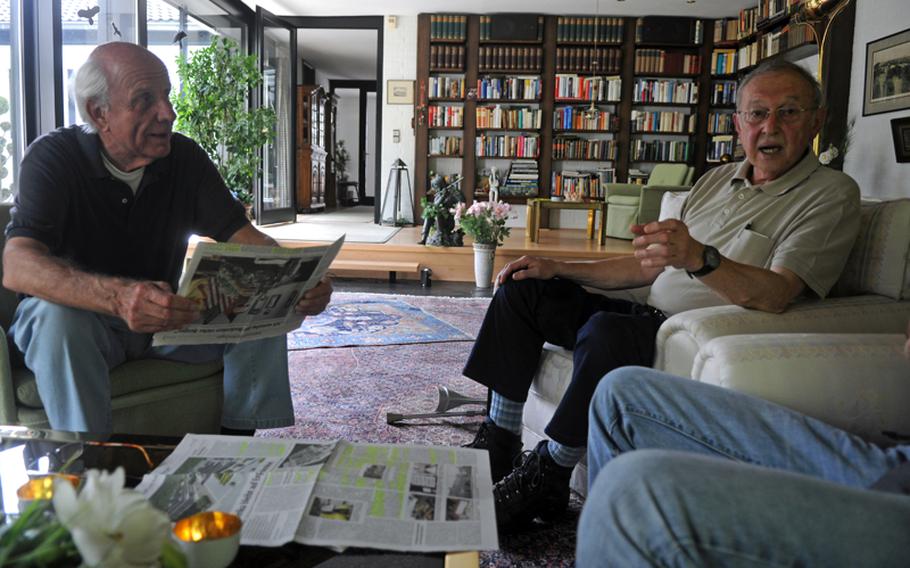 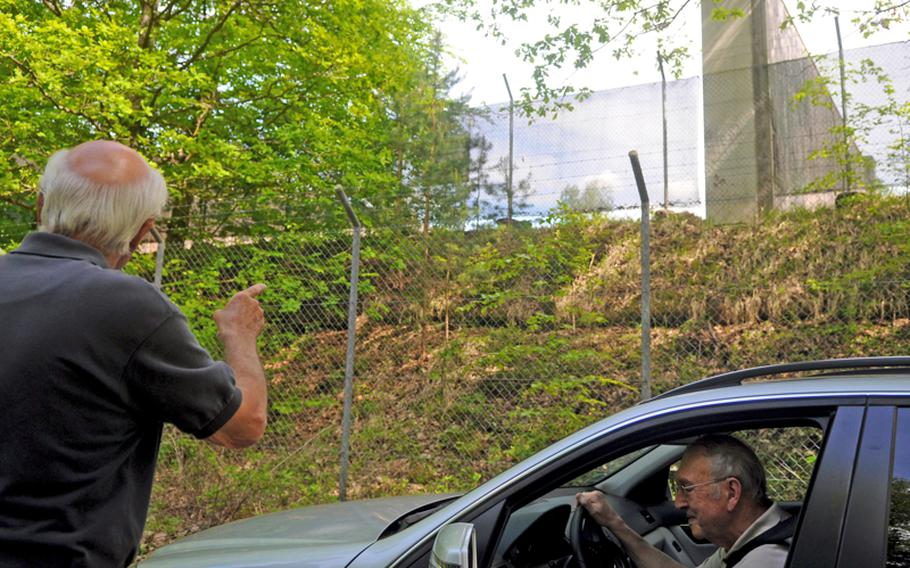 Ulrich Durst, left, and Eberhard Knobloch stop along a trail that runs by the Panzer firing range in Boeblingen, Germany, and leads to the Rauher Kapf neighborhood about 300 yards from the range. The trail is popular with bikers and joggers as well as families out for a stroll. Durst and Knobloch are retirees and residents of the neighborhood. (David Rogers/Stars and Stripes)

STUTTGART, Germany &mdash; The mayors are angry and so are their constituents.

After years of back-and-forth talk with the U.S. military over noise levels at the firing ranges in B&ouml;blingen, residents have a message for the Army: Stifle the sound or train someplace else.

&ldquo;I&rsquo;m running out of patience,&rdquo; said Christine Kraayvanger, mayor of B&ouml;blingen, which hosts the U.S. Army&rsquo;s Panzer Kaserne and the eight acres of shooting ranges where U.S. special operators prepare for America&rsquo;s wars.

The range, about three football fields&rsquo; distance from a residential neighborhood, has irritated residents for years. Now, nearly three years after an Army-funded noise study found that the sound was indeed excessive, politicians and residents want to see more action.

&ldquo;Everybody agrees it&rsquo;s too noisy. It sounds like you are on a battlefield,&rdquo; said Eberhard Knobloch, a retired B&ouml;blingen resident. &ldquo;The answer we always get is, &lsquo;Our soldiers have to practice.&rsquo; And we have to suffer.&rdquo;

Residents want the Army to pay to renovate the entire B&ouml;blingen Land Training Area&rsquo;s firing ranges with noise abating barriers, not just a portion as the Army has done so far.

The steady crackle of gunfire can be heard almost daily around the neighborhood of Rauher Kapf, home to about 1,500 people, a small kindergarten and a health clinic.

Kraayvanger said B&ouml;blingen established a special committee in response to demands from upset residents, but local officials say efforts to pressure the Army have failed to yield sufficient improvements.

The Army says it dealt with some noise concerns while making other improvements to the ranges. However, noise abatement wasn&rsquo;t the prime motive.

&ldquo;In the case of Boeblingen, in addition to complying with all federal agreements for training hours at the range, we spent $2,600,000 on necessary repair work on ranges 1 to 3,&rdquo; said Hilde Patton, a USAREUR spokeswoman in a written statement. &ldquo;We are pleased that the result will also include, as a byproduct, a reduction of noise. Ranges 4 and 5 in Boeblingen do not require any repair work at this time.&rdquo;

While USAREUR did not say whether money was a factor, getting funds for noise abatement could prove difficult in the current budget environment. That is little comfort to residents and German politicians, who recently sent a letter to USAREUR leadership seeking answers.

In the March 26 letter to USAREUR commander Gen. Mark Hertling, Kraayvanger, along with Wolfgang L&uuml;tzner, B&ouml;blingen&rsquo;s lord mayor, and Tobias Heizmann, mayor of the nearby town of Sch&ouml;naich, expressed frustration over the lack of a comprehensive plan.

Some members of the federal parliament in Berlin representing the coalition partners also have taken an interest.

&ldquo;It is a clear-cut legal situation. Whoever operates a shooting range in Germany has to make sure he will act in accordance with relevant [German] noise regulations,&rdquo; said Florian Toncar, a member of the Free Democratic Party.

Between 1950 and 1970, residential developments began to sprout up near the range, but at that time, the noise wasn&rsquo;t as bad, residents say. Though local officials allowed the development, German political leaders still assert it is a problem for the Americans to solve.

Toncar said the Army as operator must take proper steps to bring the range into alignment with German noise regulations.

&ldquo;If you consider the enormous financial investments the Army made regarding the infrastructure of [Panzer Kaserne], such as a school, a shopping center, outdoor recreation and even a hotel, the investments regarding the noise-reduction measurements are bearable.&rdquo;

Clemens Binninger, a legislator from the Christian Democratic Union, credited the military with improving three of the ranges, but said that more remodeling is needed for ranges 4 and 5.

In their letter to the Army, the mayors asked Hertling to investigate options for financing the project. As of May 23, they hadn&rsquo;t received a response. USAREUR declined to say whether Hertling received the letter, citing a policy not to comment on his correspondence.

While the U.S. Army has been at Panzer Kaserne since just after World War II, the shooting range about a half mile from the base was hardly used in the old days, residents said.

&ldquo;It didn&rsquo;t used to be that bad,&rdquo; said Knobloch, a retired Hewlett Packard executive, who has lived in the same home since 1966.

All that changed with the arrival of the 1st Battalion, 10th Special Forces Group in 1991. After the terror attacks of Sept. 11, 2001, and the launch of the wars in Iraq and Afghanistan, usage of the shooting range increased, residents said.

&ldquo;I can hear the shooting inside my home with my doors and windows shut,&rdquo; said Ulrich Durst, a retired resident active in the effort to pressure the Army. &ldquo;All we want is our quality of life back.&rdquo;

While shooting doesn&rsquo;t occur every day, that would be thousands of rounds per day.

&ldquo;I don&rsquo;t know why the heck they keep these young people here for this kind of shooting,&rdquo; said Fritz Haist, a retired IBM executive, who says the countryside is a better place for the Army. &ldquo;Why the hell are they always training?&rdquo;

The Army has taken some steps to be better neighbors. For instance, the troops don&rsquo;t shoot on weekends or German holidays. But the pace during weekday work hours has been unrelenting in recent years, Knobloch said.

Complaints about military training aren&rsquo;t unusual in communities home to U.S. bases. In Ansbach, residents have taken issue with helicopter noise, and in the rural Grafenw&ouml;hr area some locals complain about the noise from training ranges.

But unlike those training areas, where the local economy depends heavily on the U.S. presence, Panzer Kaserne is in the densely populated, well-heeled greater Stuttgart area, where multinational corporations, including Daimler and IBM, serve as the economic engine. As a result, residents and political leaders are less beholden to the military and not afraid to speak out.

While most of the military footprint in the Stuttgart area is comprised of low-key headquarters operations, the special operations troops are the exception.

&ldquo;I do wonder why the Special Forces were ever sent here,&rdquo; said Knoblauch. &ldquo;It doesn&rsquo;t make sense in a place like this.&rdquo;