Warm hats and gloves are essential items for anyone who wants to spend a lot of time outdoors when the weather gets cold. (Kent Harris / S&S)

Warm hats and gloves are essential items for anyone who wants to spend a lot of time outdoors when the weather gets cold. (Kent Harris / S&S) 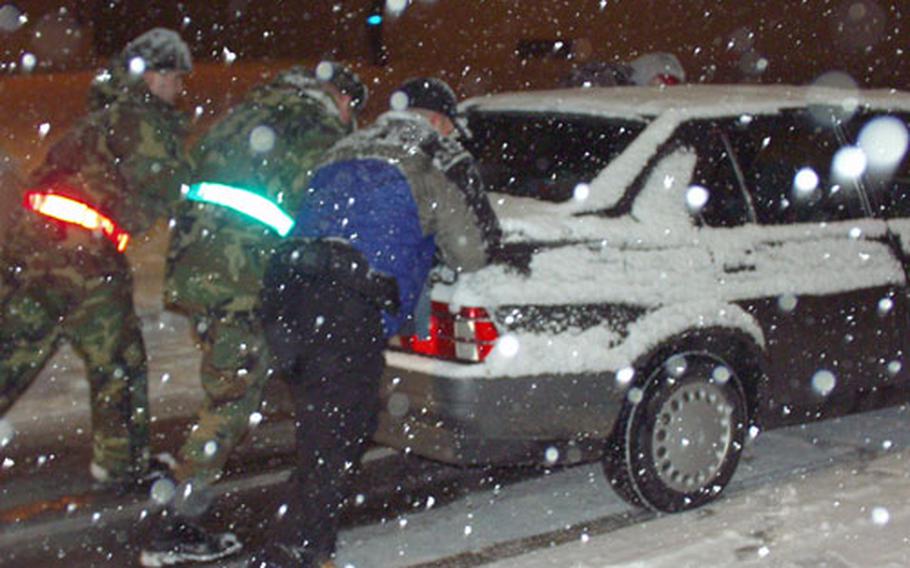 Airmen push a car up the slope and away from the Area 1 gate at Aviano Air Base, Italy, in December 2001. (Kent Harris / S&S)

Wintry temperatures and conditions aren&#8217;t that far away from many parts of Europe, and, according to military safety experts, that means it&#8217;s time to start taking action to winterize vehicles, homes and bodies.

&#8220;As we transition into winter, we all need to pay attention to the conditions around us,&#8221; said Chief Master Sgt. Clifford Tebbe, chief of the ground safety division for U.S. Air Forces in Europe.

Traffic accidents are the No. 1 safety hazard for Air Force personnel, he said, and a leading danger to all servicemembers. Wet roads, ice and snow don&#8217;t make driving in Europe any easier.

&#8220;Everything you do in the winter time needs to be slowed down,&#8221; said Jake Mathews, chief of fire prevention for the Kaiserslautern Military Community. That includes not only driving, but simply walking on potentially slippery sidewalks, he said.

Here&#8217;s a brief look at what experts say those living in military communities in Europe need to be aware of in the next few months:

On the roadTebbe said drivers not only need to react to the conditions around them, but prepare for them ahead of time.

&#8220;Make sure your vehicle is winterized,&#8221; he said. That means checking and possibly replacing antifreeze and windshield wiper fluid. Some countries, including Germany, have adopted regulations requiring vehicles have the proper tires to meet conditions.

Those involved in accidents without the tires face fines, the loss of some insurance protection and other punishments.

Drivers need to be prepared for slower traffic and conditions such as rain or snow that could make roads hazardous. &#8220;Even if you drive at the posted speed limit, you could be cited for going too fast for the conditions,&#8221; he said. &#8220;Know the local restrictions and follow them.&#8221;

In the homeColder temperatures mean that heaters start to get switched on. Such devices are a leading cause of fires in the States, according to Mathews and information cited from the National Fire Protection Association. &#8220;If a space heater is properly used, there&#8217;s nothing wrong with it,&#8221; Mathews said.

Unfortunately, he said, that&#8217;s not always the case. Such heaters need to be placed on floors or carpets that can handle the heat and at least three feet away from anything else. This means not setting them up at the foot of the bed where covers might get kicked off at night, he said.

And it means monitoring their use at all times, especially for those with small children or pets. Most modern heaters are designed to shut down when tipped, but not all will. Those with heaters attached to the wall should have them inspected annually. Mathews said most rental agreements require the landlord to take care of it. Those who haven&#8217;t seen the inspectors this fall should ask.

Mathews said people should not keep all their windows closed because harmful gases such as carbon can build up. That&#8217;s especially true in European homes, which are often built more solidly than their U.S. counterparts. Carbon poisoning can cause sickness and even death.

Being body consciousTaking precautions in the home or car won&#8217;t help much if the same care isn&#8217;t applied to your body.

People who dress properly, maintain their health with proper sleep and diet and adjust to the conditions can avoid most problems, according to Capt. Margaret Fahy from the Center for Health Promotion and Preventative Medicine at Landstuhl Regional Medical Center and Andrea Snyder, an epidemiologist who works at the center in Germany.

Dressing well means wearing several loose layers of clothing and sunglasses and sun block for those planning to spend the day on the slope. Hats, gloves and dry socks help retain heat.