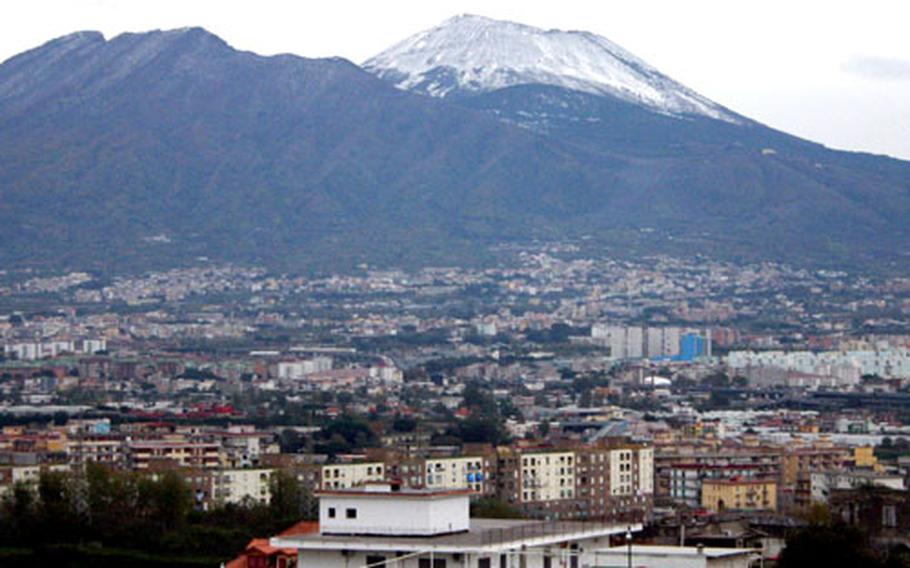 A snow-capped Mount Vesuvius greeted Neapolitans on Tuesday and Wednesday as temperatures dipped below freezing and a biting wind forced residents to bundle up. While the sight of snow on Mount Vesuvius isn’t an aberration, it’s a view not usually seen before late December or early January. (Sandra Jontz / S&S)

It might be too early to talk about a white Christmas. But the chances are good that at least some American military communities across Europe will see a few snowflakes during the long Thanksgiving weekend.

The first snow of the season has fallen on a few spots around Europe, but most bases haven&#8217;t seen the white stuff yet. In fact, up until Nov. 13, the temperatures had been rather warm.

&#8220;We have experienced an abnormally warm autumn this year in Europe,&#8221; said Senior Airman Callie Watts, a forecaster with the 21st Operational Weather Squadron at Sembach, Germany.

But in the last few weeks, temperatures dropped in many areas of Germany, with daily highs never reaching 40 degrees Fahrenheit. Residents of northern Italy have had to scrape ice off windshields the past few mornings. Fog and overcast skies have alternated in areas of the United Kingdom.

In other words, winter&#8217;s either arrived or in the neighborhood.

Military forecasters are expecting a mix of rain and snow at locations in Germany and the United Kingdom over the next week. But snow, if it comes to most locations, shouldn&#8217;t be heavy, Watts said.

Bases with the best chances for heavier amounts of snow include RAF Croughton and RAF Fairford in England and the training areas of Grafenw&#246;hr and Hohenfels in Germany.

Those planning trips to other countries during the holiday break could encounter weather challenges. Parts of France, northern England, Austria and the Czech Republic are all likely to see variable snowfall.

Not all areas of Europe are seeing cooler temperatures, however. Airmen at Incirlik Air Base in Turkey are currently experiencing temperatures in the low 60s.

But even in some areas that are traditionally warmer, such as Naples, Italy, winter can bring challenges.

Fog, especially in the mornings, can be quite thick and limits visibility. Al Zaldo, safety director at Naval Support Activity Naples, told a group of sailors Monday he was surprised to see the number of vehicles that don&#8217;t meet basic safety standards &#8212; such as two operating headlights.

He recommended that people traveling should &#8220;be thinking about the long haul,&#8221; not just Thanksgiving, and plan accordingly. If leaving town, servicemembers should notify their chain of command, and leave an itinerary and emergency telephone numbers with a trusted person on base. &#8220;And make sure your cell phones are fully charged,&#8221; Zaldo said.

Base publications have begun to publish similar information across the theater. The U.S. Air Forces in Europe public affairs office released a series of tips Tuesday courtesy of the command&#8217;s safety directorate.

Among them: have a mechanic inspect vital systems and make sure cars are equipped with proper safety equipment; and anyone planning long trips should include blankets, food, water and enough supplies to temporarily live out of the car in case of bad weather.

Watts said current forecasts call for cold temperatures in much of Europe through most of December, though temperatures might rise a bit before Christmas &#8212; leaving Santa and his reindeer good footing for rooftops.

Stars and Stripes reporter Sandra Jontz in Naples, Italy, contributed to this story.