In Europe, a resurgent Russia, wary allies and a military mission to be defined 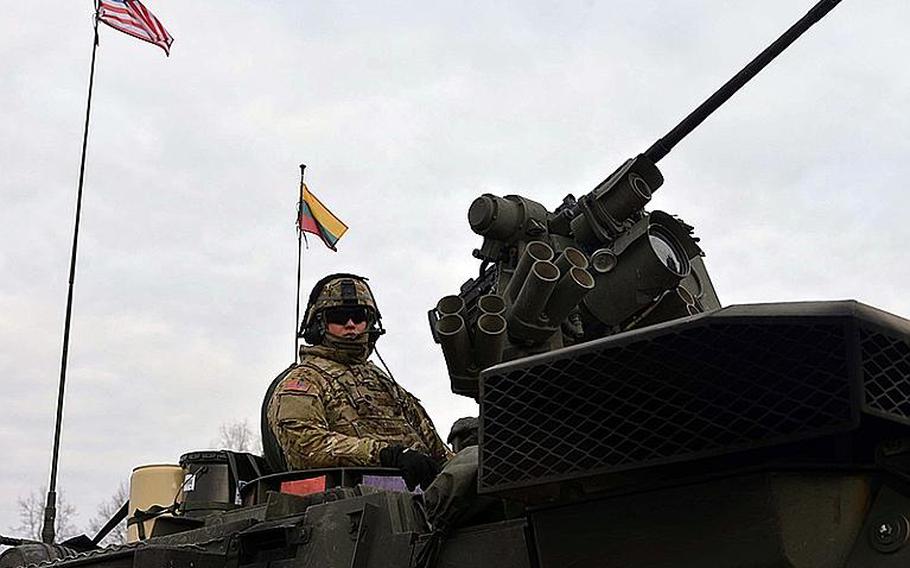 Spc. Bogdan Tkachuk of Lightning Troop, 3rd Squadron, 2nd Calvary Regiment sits in his Stryker in Alytus, Lithuania, on Monday, March 23, 2015, before his unit began its convoy back to Germany htrough Lithuania, Poland and the Czech Republic as part of an operation dubbed Dragoon Ride. The unit had been training in Lithuania. The exercise was conducted as a show of solidarity and support for Eastern European NATO allies in the wake of Russia's intervention in Ukraine. (Michael Abrams/Stars and Stripes)

Spc. Bogdan Tkachuk of Lightning Troop, 3rd Squadron, 2nd Calvary Regiment sits in his Stryker in Alytus, Lithuania, on Monday, March 23, 2015, before his unit began its convoy back to Germany htrough Lithuania, Poland and the Czech Republic as part of an operation dubbed Dragoon Ride. The unit had been training in Lithuania. The exercise was conducted as a show of solidarity and support for Eastern European NATO allies in the wake of Russia's intervention in Ukraine. (Michael Abrams/Stars and Stripes) 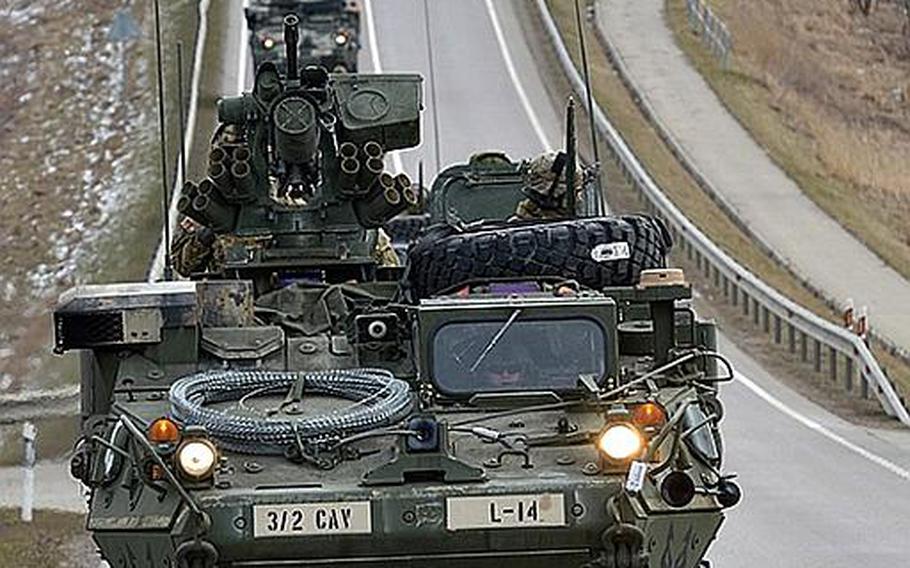 Strykers of Lightning Troop, 3rd Squadron, 2nd Cavalry Regiment convoy from Alytus, Lithuania, to the Polish border on March 23, 2015. They continued their so-called Dragoon Ride through Poland and the Czech Republic to their home base at Vilseck, Germany, following training in Lithuania. Dragoon Ride was organized as a show of solidarity in the wake of Russia's actions in Ukraine. (Michael Abrams/Stars and Stripes) Two F-22 Raptors, left, and two A-10 Warthogs fly somewhere over Eastern Europe on Friday, Sept. 4, 2015. The Raptors, from Tyndall Air Force Base, Fla., were making their maiden deployment to Europe. The A-10s, deployed to Amari Air Base, Estonia, from Whiteman Air Force Base, Missouri, met up with the F-22s while the Raptors were en route to Estonia. After years of drawdowns in Europe, the United States has been building up forces in response to a resurgent Russia. (Jennifer H. Svan/Stars and Stripes) 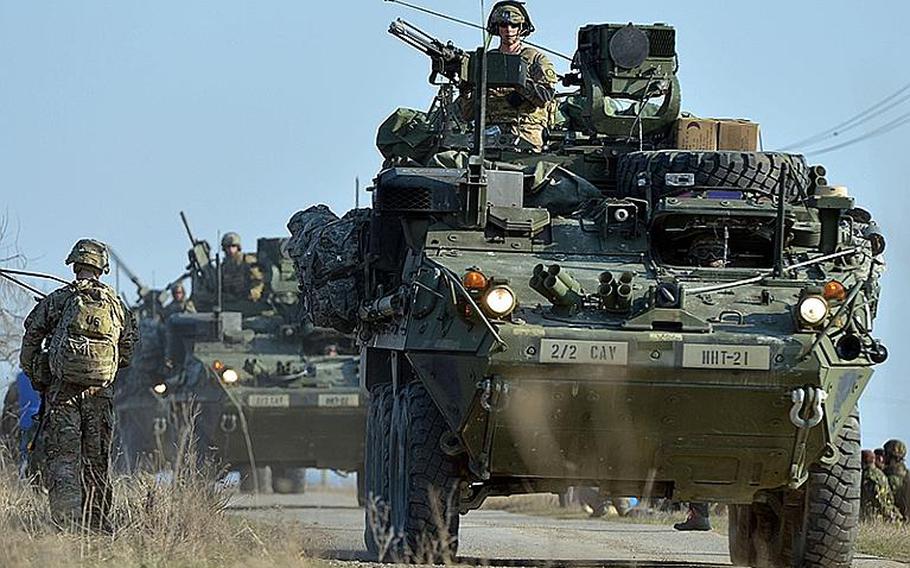 Strikers from 2nd Squadron, 2nd Cavalry roll into the Smardan training area in Romania to meet up with soldiers from the 173rd Airborne Brigade who parachuted in earlier as part of Operation Atlantic Resolve, Tuesday, March 24, 2015. (Michael Abrams/Stars and Stripes) 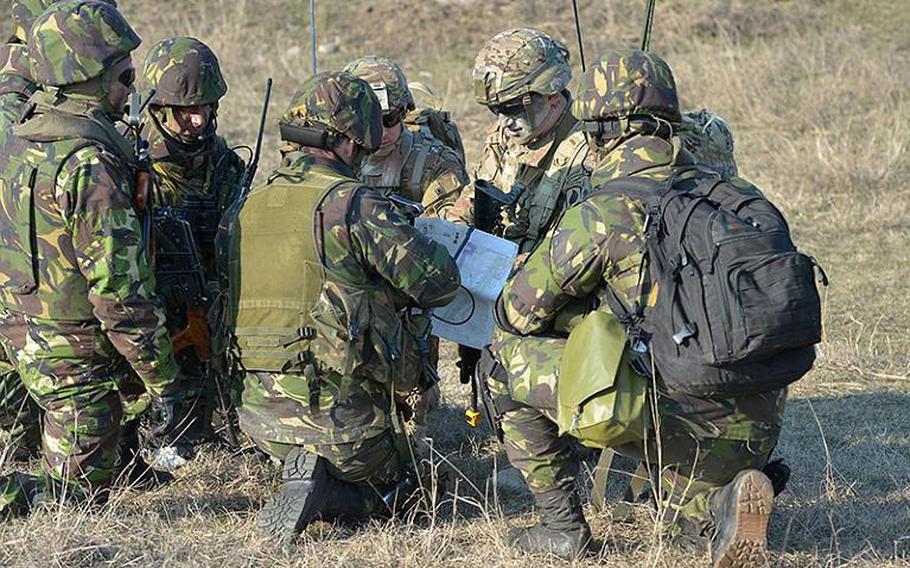 Soldiers of the 173rd Airborne Brigade talk to Romanian soldiers after the Vicenza, Italy-based soldiers parachuted into the the Smardan training center, Romania, on Tuesday, March 24, 2015. and Stripes (Michael Abrams/Stars and Stripes)

Editor's note: This is the second installation of "Facing the Future: Military matters facing the next president," a five-part series.

Army mission in Europe grows, but for how long? In Africa, terrorism dominates a resource-challenged mission America’s next president will have to pass judgment on a military strategy that has centered for the past two years on building up forces in Europe, after the United States had been steadily cutting back since the end of the Cold War.

The increases come in response to concern about a resurgent Russia, which Pentagon brass has called a top threat after Moscow’s 2014 intervention in Ukraine.

The signature piece of the new strategy calls for rotating a brigade of 5,000 troops with battle-ready tanks and artillery onto the continent on a full-time basis and quadrupling spending in 2017 to $3.4 billion.

Since the Ukraine intervention, relations between NATO and Russia have sunk to a post-Cold War low. Close encounters between Russian and U.S. forces in the air and at sea have become more frequent, and concerns about a military escalation have grown.

The next president must decide whether to move forward with the European campaign, expand it or begin to scale back.

But Republican candidate Donald Trump has questioned the foundation of the new strategy. He has suggested U.S. interests are best served by partnering with Russia in the fight against Islamist terrorism rather than antagonizing Moscow — especially over parts of Europe such as Ukraine that are not part of the NATO alliance.

Trump has also threatened to cut back on U.S. support for NATO unless the European allies take a bigger share of common defense — something U.S. officials have complained about for years. Democrat Hillary Clinton, and much of the GOP security establishment, fear any weakening of the NATO alliance.

During the Cold War, troop levels in Europe peaked at about 300,000 troops, but 25 years of cutbacks have left a force today of 62,000 U.S. servicemembers. In recent years, it appeared likely more cuts were on the horizon amid budget constraints and a lack of any clear threat in Europe.

Russian’s intervention in Ukraine alarmed NATO’s Eastern European allies and altered the Pentagon’s perception of Europe, where it has sought to buttress its mission with more rotational troops, units and hardware.

The enhanced U.S. mission is part of the European Reassurance Initiative, launched in 2014 as a way to infuse military funds and forces to Europe. The effort includes building up air fields and training ranges along Europe’s eastern flank — stretching from the Baltics to Bulgaria — expanding anti-submarine patrols out of Iceland and more frequent patrols of Air Force fighters.

The purpose is twofold: reassure allies nervous about Russian intentions and send a deterrent signal directly to Moscow.

More big cutbacks to the U.S. force in Europe could signal disengagement to allies and Russia. However, an excessive buildup could exacerbate tensions with the nuclear power and possibly undermine attempts to cooperate with Moscow on other fronts, including the fight against the Islamic State group and containing Iran.

“How do we resolve the idea of having the military security structure in place that clearly serves to deter Russian adventures but at the same time doesn’t begin the cycle of they do one thing and we do another in a steadily increasing face-off over borders,” said James Collins, a former U.S. ambassador to Russia. “It is a hard challenge.”

The issue has reopened longtime debates over America’s role in the world, the relevance of NATO and the limits of U.S. interests. The tenor of the debate has sharpened with the campaign for the next U.S. president.

Even before Trump emerged as a candidate, two of President Barack Obama’s secretaries of defense warned America was growing tired of bearing the brunt of Western defense.

In 2011, Hagel’s predecessor Robert Gates told NATO that the “blunt reality” that Congress and the U.S. public were unwilling “to expend increasingly precious funds on behalf of nations that are apparently unwilling to devote the necessary resources” to their own defense.

Russia’s moves in Ukraine brought the issues into sharp focus.

After protests brought down a pro-Russian Ukrainian president, Moscow sent troops into the country and annexed the Crimean Peninsula after a disputed referendum in which Crimeans voted to join Russia.

Pro-Russian residents of eastern Ukraine rose up against the government in Kiev and established breakaway mini-states, a move the United States and its allies said was engineered by Russia in violation of international law.

Eastern European members of NATO feared the Russians could use similar tactics against them without a renewed commitment from NATO.

The U.S. military mission in Europe, which had been on a steady decline, was roused to action. However, critics of the alliance questioned whether the United States was getting sucked into a needless confrontation. Many of them believe NATO made a fundamental mistake by expanding into areas once part of the Soviet orbit in Eastern Europe when the Soviet Union collapsed in 1991.

Ted Galen Carpenter, a military analyst at the libertarian Cato Institute think tank in Washington, wrote the only way out of the “long-standing, frustrating dynamic” is to gradually withdraw all U.S. ground forces from Europe and drastically downsize air and naval forces there.

Weighing the risks could be high on the next president’s agenda. Assessing threats elsewhere — Islamist terrorism, Iran, North Korea and China — are part of the equation.

“There is no doubt about the fact that Russia is trying to reassert itself in parts of Europe, but in terms of someone who is going to cause you harm, (the Islamic State group) is a much more immediate problem,” said Lawrence Korb, a former assistant secretary of defense for manpower. “That to me is the more immediate threat, but in terms of the overall strategic rationale for a large defense budget, it is Russia and China.”

So far, the United States has achieved something close to the right balance, some experts say, with its Eastern European expansion through scattered rotations of small Army units, increased Navy patrols in places such as the Black Sea and more frequent Air Force maneuvers throughout the region.

Russia has responded with outrage, calling the moves a dangerous provocation and threatening to respond with a buildup of its own.

During the past two years, the United States has moved resources into its ongoing Atlantic Resolve campaign, which aims to reassure allies along Russia’s border and send a signal that NATO territory is off limits, spending nearly $2 billion during two years on those efforts.

Yet for all the NATO rhetoric about its plan to place a force of credible deterrence in the east, Russia still has the overwhelming edge in numbers, capabilities and geography. Despite Russia’s protests and vows of retaliation, most of its major troop movements have been to the south and east, not toward NATO territory, experts say.

For the United States, the primary objective is to signal to allies and Russia that it is ready to respond with force if Moscow tests alliance resolve. To that end, the United States and other NATO countries have already committed to a small force in the Baltics and Poland — multinational battalions will be added next year in each country — to signal their readiness to defend alliance territory. Even a small number of American troops on the front line sends Moscow a message.

“As long as you’ve got that, you’re done,” said Korb. “The only question that matters is, ‘Is the United States willing to fight for a NATO member?’ If they are, the fight is not worthwhile for Russia to have.”

In military circles, it is a matter of debate about whether the United States has sufficient forces in the Baltics region. Various war games indicate Russia could easily overrun the countries there.

Some analysts say adding several brigades would help blunt a Russian offensive and deter any aggression from Moscow. Critics say such a buildup is pointless because it’s extremely unlikely that Moscow would ever attempt a direct confrontation with the U.S.-led NATO.

“Russia has reoriented its approach and rejected the idea of integration with Europe and decided to go its own direction, set its own agenda, to be the leader of an alternative model,” Collins said. “The next administration, no matter what happens, is going to face the problem of how we face this question of a new kind of relationship between West and East.”