In era of tight budgets, how many aircraft carriers are enough? 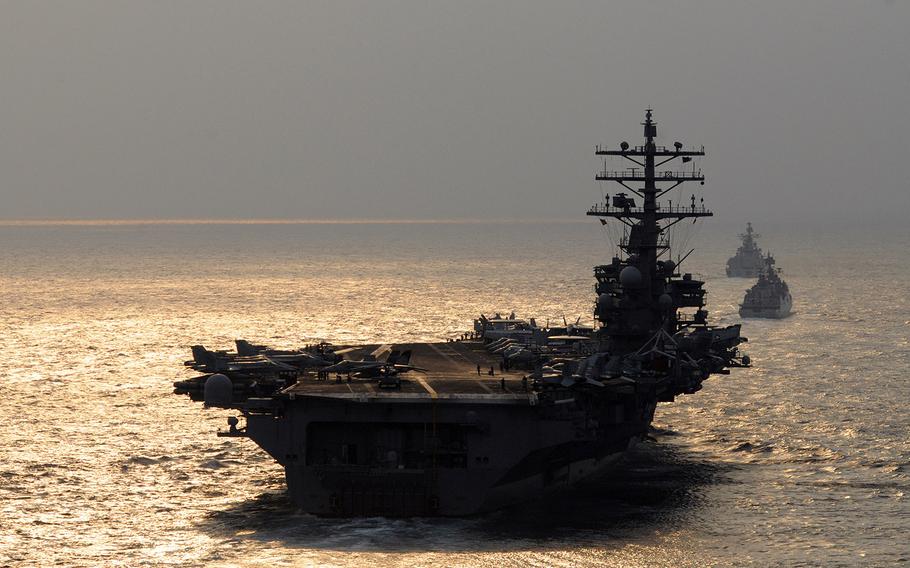 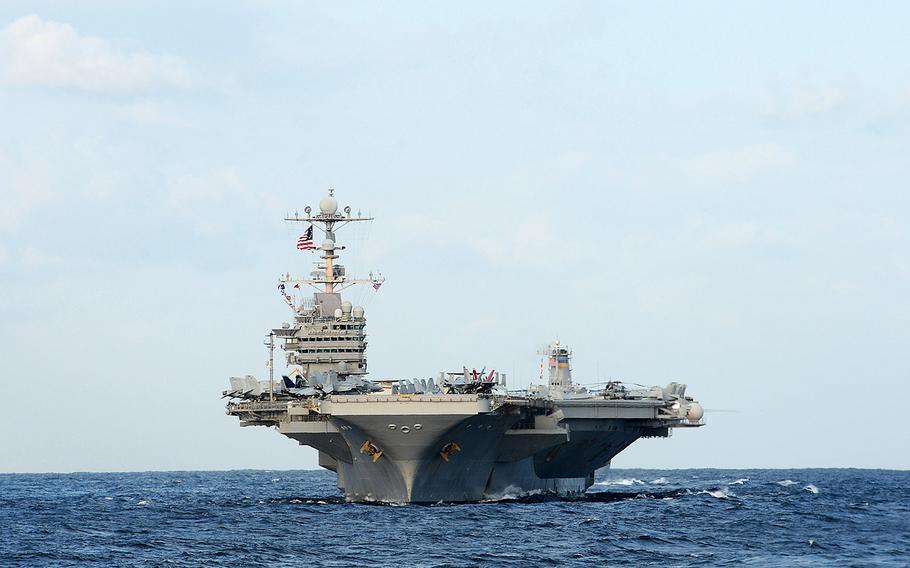 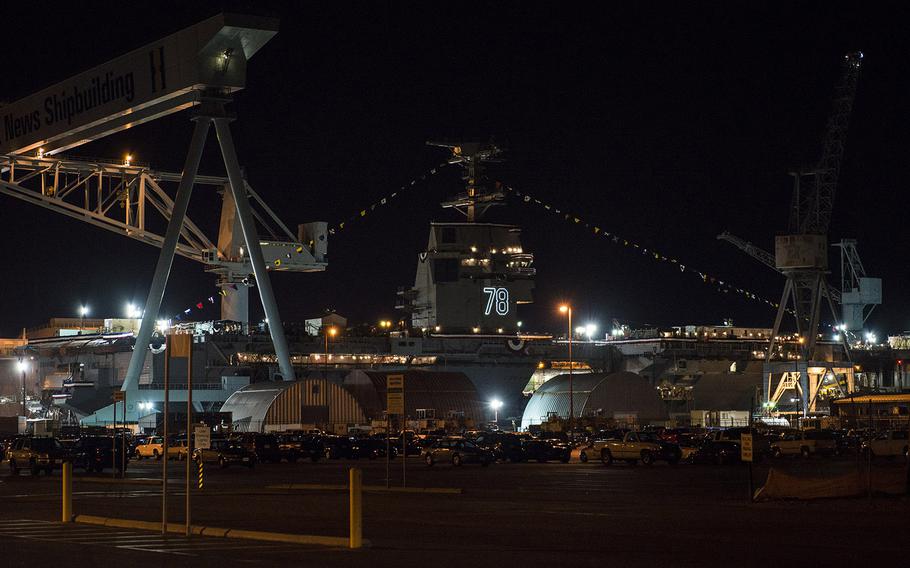 The aircraft carrier USS Gerald R. Ford (CVN 78) sits in dry dock 12 at Newport News Shipbuilding waiting to be christened. Ford is the first of a new class of aircraft carriers replacing the Nimitz-class carrier launched in 1972. (Davis Anderson/U.S. Navy) 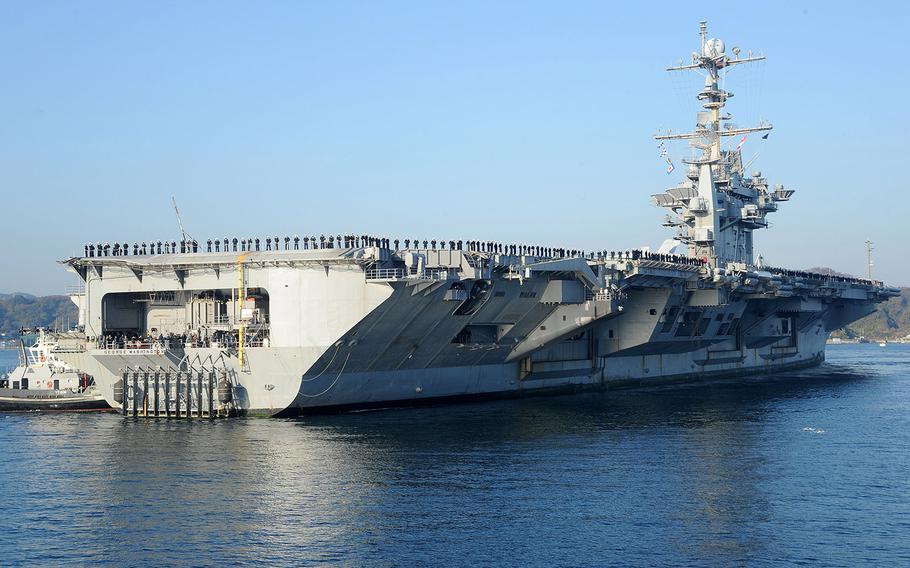 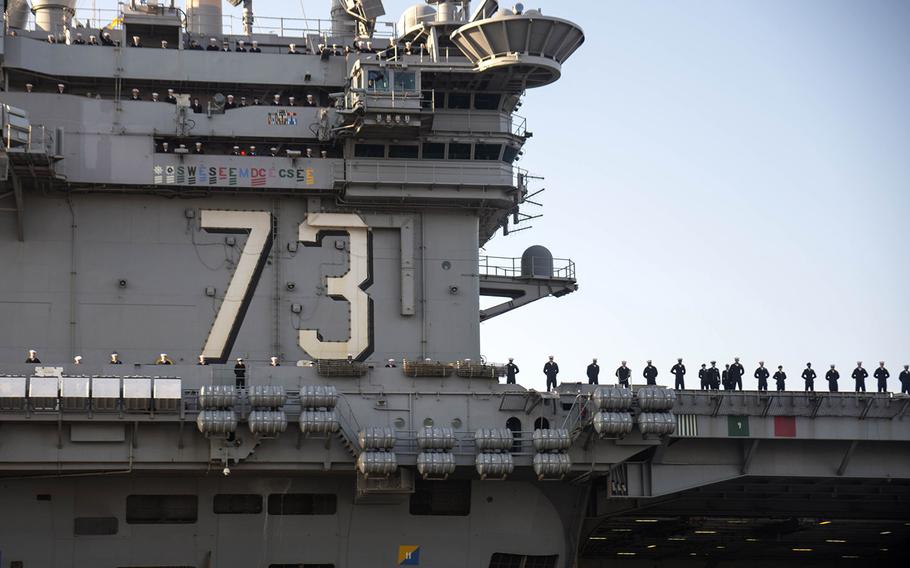 Sailors assigned to the aircraft carrier USS George Washington (CVN 73) man the rails as the ship returns to Fleet Activities Yokosuka. George Washington Carrier Strike Group provides a combat-ready force that protects and defends the collective maritime interests of the U.S. and its allies and partners in the Indo-Asia Pacific region. (Abby Rader/U.S. Navy) 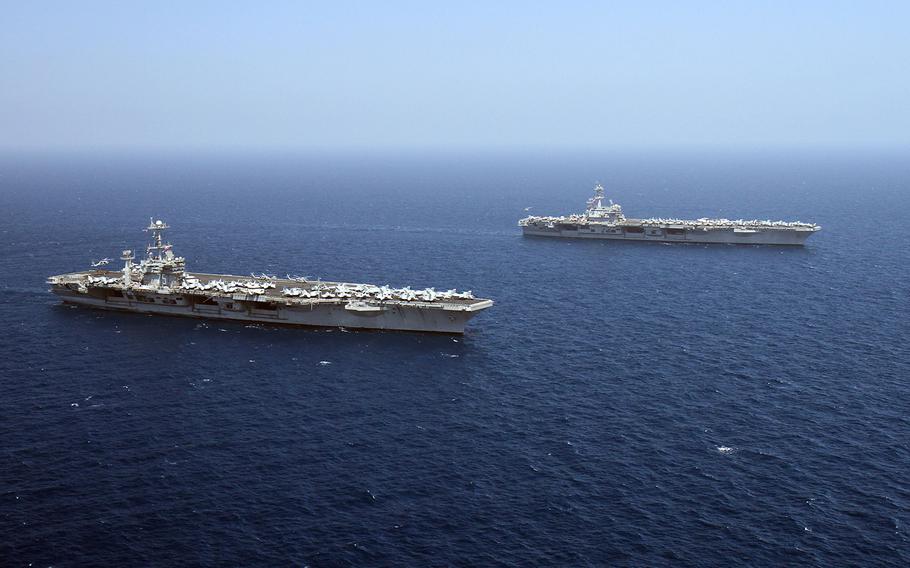 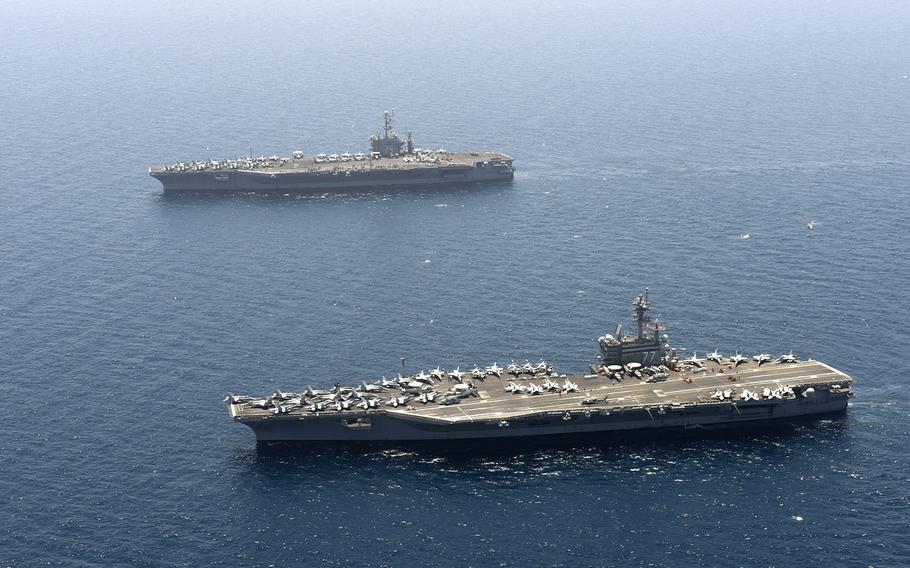 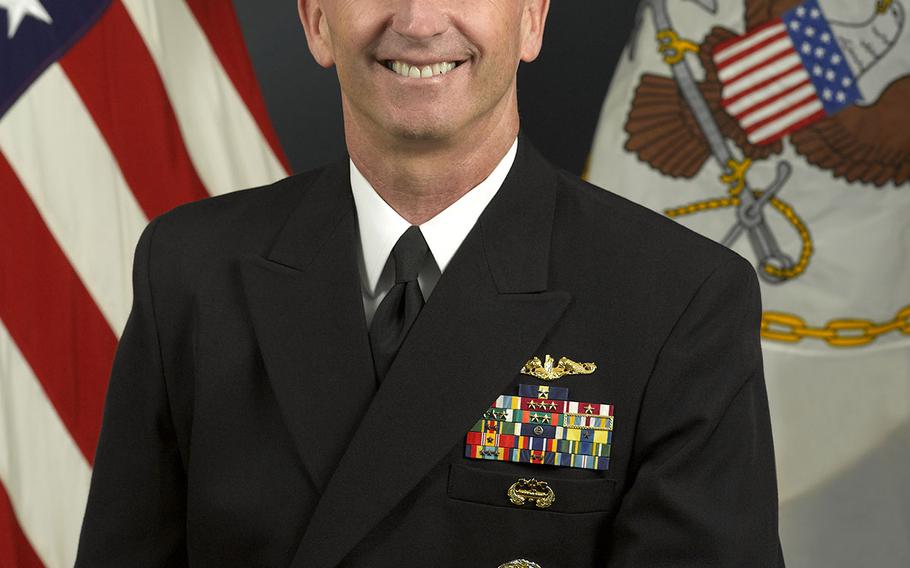 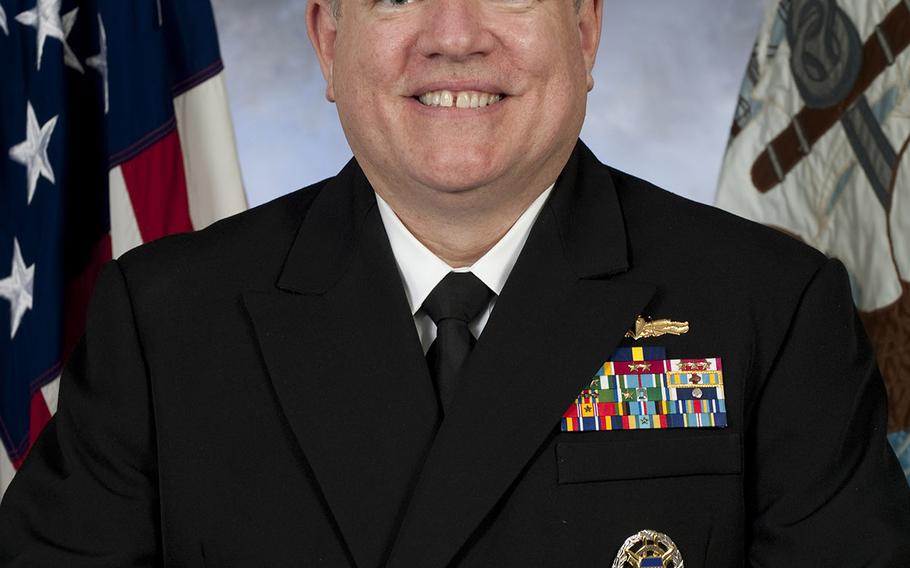 WASHINGTON — Aircraft carriers are perhaps the most powerful expression of U.S. military might. They’re also expensive and potentially vulnerable. In an era of fiscal constraint, defense officials, lawmakers and the commander in chief must answer a question that could have enormous strategic consequences: How many are enough?

Adm. Jonathan Greenert, the Chief of Naval Operations, believes he knows the answer.

“We need 11, when you add [combatant commander requirements] with the contingencies that we are tasked to respond to, in the time that we have to respond, and the capabilities that we have out there. ... And so when I look out into the future, we need at least 11 carriers,” he told reporters last month.

The Pentagon is considering retiring the carrier USS George Washington to save money if Congress doesn’t lift the budget caps imposed on the Defense Department. Such a move would cut the authorized carrier fleet from 11 to 10 ships.

“We would have to change the way we do presence and the way we think about contingency response if we go to 10 aircraft carriers,” Greenert said. In that scenario, according to the Navy chief, the U.S. would have to accept coverage gaps or change its force posture model.

The Navy aims to always have three carriers on station in the strategically vital regions of the Western Pacific and the Middle East. How those three carriers are divvied up among those areas depends on the security situation in both places.

Only a fraction of the fleet are at sea at any given time, due to maintenance and training.

With 11 carriers, the Navy can maintain an average of 3.5 carriers deployed, according to retired Vice Adm. Peter Daly, who commanded a carrier strike group. The average is higher than three because when one carrier is relieving another in an area of operations, there are more than three carriers at sea.

But with a 10-carrier fleet, that average number of carriers deployed drops to about 3.0, and there are times when fewer than three carriers are at sea, Daly said. With nine carriers, the deployment average drops to 2.5. Going down to eight would make it difficult to keep even two carriers deployed, according to Daly.

The effects of having fewer than 11 carriers are already being seen. Right now, the Navy has only 10 available because the USS Enterprise was retired at the end of 2012, and its replacement, the USS Gerald R. Ford, won’t be ready until 2016 at the earliest. As a result, the U.S. won’t have a carrier based in Asia in late 2015 after the George Washington leaves Japan and sails to Virginia to prepare for an overhaul, according to the Navy. The USS Ronald Reagan will eventually move to Japan, but Navy officials would not provide specific time lines for when that will happen.

Outside analysts are not as reluctant to ax the flattops. During a recent budget and force planning exercise conducting by four Washington think tanks, the teams proposed cutting two to four carriers over the next 10 years. In a tight fiscal environment, the think tank analysts saw reducing the number of carriers as preferable to putting other military capabilities on the chopping block.

The carrier’s price tag is indeed high. It costs hundreds of millions of dollars a year to operate a carrier strike group, and the newest carrier — the USS Gerald R. Ford — cost approximately $13 billion to procure.

Todd Harrison of one of the participating think tanks, the Center for Strategic and Budgetary Assessments, described carrier-cutting proposals as “the least worse alternative given the [budget] constraints.” But he noted that each team proposed cutting the same number of carriers under both a full-sequestration budget cap scenario and a more generous half-sequestration budget cap scenario.

“That indicates that these decisions in each team were not necessarily [totally] budget driven,” Harrison said at a conference when the results of the exercise were unveiled earlier this year.

Center for Strategic and International Studies analyst David Berteau told conference attendees that his proposal to cut three carriers from the fleet over the next decade was based on an assumption that there would still be a forward deployment capability that provided the same coverage that the Navy has today.

Greenert contends that trying to maintain the same coverage with fewer carriers by instituting longer deployments and doing less maintenance would be counterproductive.

“Some folks say, ‘Well, deployments will just be longer.’ I say not necessarily, [because] there’s a limit to that. There’s an optimal response that you can provide that would be to come back and you do maintenance and train again and go out there. And we have to take care of our sailors … and the equipment. So if you just turn the crank faster, for lack of a better term, in the cycle of deployment, the ship gets older faster [and] the uranium burns out faster [and] you don’t get [to keep the ship in service] for 50 years,” according to the Navy chief.

Daly said carrier deployments typically last seven or eight months nowadays, which is sustainable (although six-month deployment would be ideal), but extending that time line would result in excessive wear and tear on the flight decks, making the surface more dangerous for aviators and crew members. It would also place too much stress on sailors, according to Daly.

“If you get north of eight months, it starts to break down … It has a bad impact on families, and eventually this will come around on us [especially when the economy improves],” he said. “It’s unrealistic to think that we’d have the retention we have today.”

Skepticism about the need to maintain 11 carriers is not limited to those outside DOD. In 2010, then Defense Secretary Robert Gates called into question the need to have that many, given the nature of the threats posed by other powers.

“The need to project power across the oceans will never go away. But consider the massive overmatch the U.S. already enjoys. Consider, too, the growing anti-ship capabilities of adversaries. Do we really need 11 carrier strike groups for another 30 years when no other country has more than one?” Gates asked a Navy League audience at the time.

But Daly said sizing the fleet simply based on the number of carriers that other countries possess is a flawed methodology because the American Navy doesn’t just fight other navies; in wartime, carriers are used as a platform from which planes attack targets ashore, like they have throughout the war in Afghanistan in support of U.S. troops on the battlefield. Carriers also offer advantages over overseas air bases because they are more difficult to target and they don’t require the U.S. to get a “permission slip” from other governments to launch airstrikes from their soil, Daly noted.

Critics also argue that emerging anti-ship missiles, especially China’s DF-21D ballistic missile, are making carriers obsolete as the U.S. military pivots towards Asia. The DF-21D — sometimes referred to as the “carrier killer” — has a reported range of nearly 1,100 miles, whereas the carrier variant of the new Joint Strike Fighter can’t fly more than 700 miles without being refueled. That means, getting the service’s premier manned aircraft of the future within striking distance of Chinese territory would require an American carrier to get within range of China’s advanced anti-ship missiles.

“The aircraft carrier is in danger of becoming like the battleships [of the World War II era]: big, expensive, vulnerable — and surprisingly irrelevant to the conflicts of our time … [But] the national security establishment, the White House, the Department of Defense and Congress persist [with buying carriers] despite clear evidence that the carrier equipped with manned strike aircraft is an increasingly expensive way to deliver firepower, and that carriers themselves may not be able to move close enough to targets to operate effectively or survive in an era of satellite imagery and long-range precision strike missiles,” Navy Capt. Henry Hendrix wrote in a paper published by the Center for a New American Security last year.

By Hendrix’s calculation, for the amount of money that the U.S. Navy spends to procure a new carrier, the Chinese military could buy more than 1,200 DF-21Ds to saturate carrier strike groups’ defensive systems.

“The risk of a carrier suffering a mission kill that takes it off the battle line without actually sinking it remains high,” according to Hendrix.

Hendrix recommends investing more in advanced conventional missiles such as the Tomahawk that can be fired from stealthy submarines, which are much harder to target than carriers. He would phase out the existing carriers.

“Money is tight, and as the nautical saying goes, the enemy has found our range. It is time to change course,” he wrote.

But Daly argues it’s illogical to abandon a major weapons platform just because an enemy is developing a weapon to counter it.

“When people bring up the DF-21D and say, wow, here’s one thing that one group says they built, it’d be like saying, ‘Well, somebody somewhere developed an anti-tank weapon, so now the world can’t have tanks’ … We have fixed air bases ashore whose GPS coordinate are known down to 20 significant digits, and somehow that’s a better alternative than an aircraft carrier that’s mobile and moves around at sea and is protected by multiple defense-in-depth systems? That’s kind of crazy if you ask me,” Daly said. “[It’s like saying], ‘Somebody invented the AK-47, so now we shouldn’t have soldiers because they might be hit by this weapon.’ It’s just bizarre.”

Greenert said the Navy has “lots of intelligence” on the DF-21D, and the service is developing countermeasures to protect its carriers.

“It’s a good weapon that they’ve developed. But there’s nothing that doesn’t have vulnerabilities, and we continue to pursue ideas in that regard … We’re working quite feverishly on that, and I’m pretty comfortable with where we can operate our carriers,” Greenert told reporters, while declining to provide details about the steps the U.S. is taking to thwart the Chinese missiles.

When it comes to the size of the fleet, Greenert said 11 carriers is “enough” to get the job done. Others say the Navy needs even more.

Given defense budget constraints, it’s unlikely that the Navy will be able to field more than 11 in the foreseeable future. But going below is 11 is currently prohibited by Congress, and a powerful group of lawmakers, industry lobbyists and seapower advocates stand in the way of that prohibition being lifted. So regardless of whether an 11-carrier fleet is too big, too small, or just enough, it is the reality that the Navy will probably have to live with.