In Durzay, Afghans leery of their own army after bazaar incident 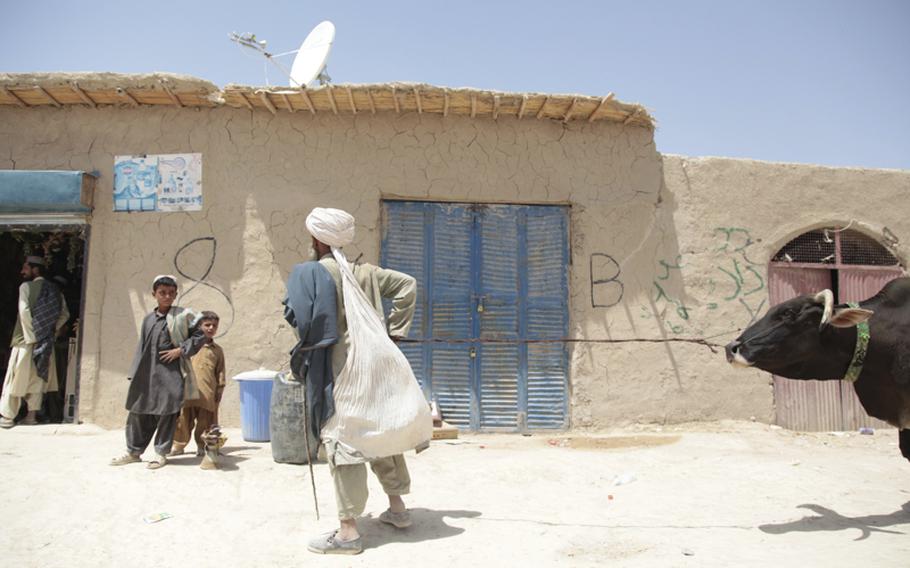 Buy Photo
A man tries to coax a cow past a shop where two Afghan soldiers were shot and stabbed by insurgents in June. The shop has a single telephone, which locals from the area rely on for calls as there is no cell phone service in this part of Helmand province. (Matt Millham/Stars and Stripes)

Buy Photo
A man tries to coax a cow past a shop where two Afghan soldiers were shot and stabbed by insurgents in June. The shop has a single telephone, which locals from the area rely on for calls as there is no cell phone service in this part of Helmand province. (Matt Millham/Stars and Stripes) 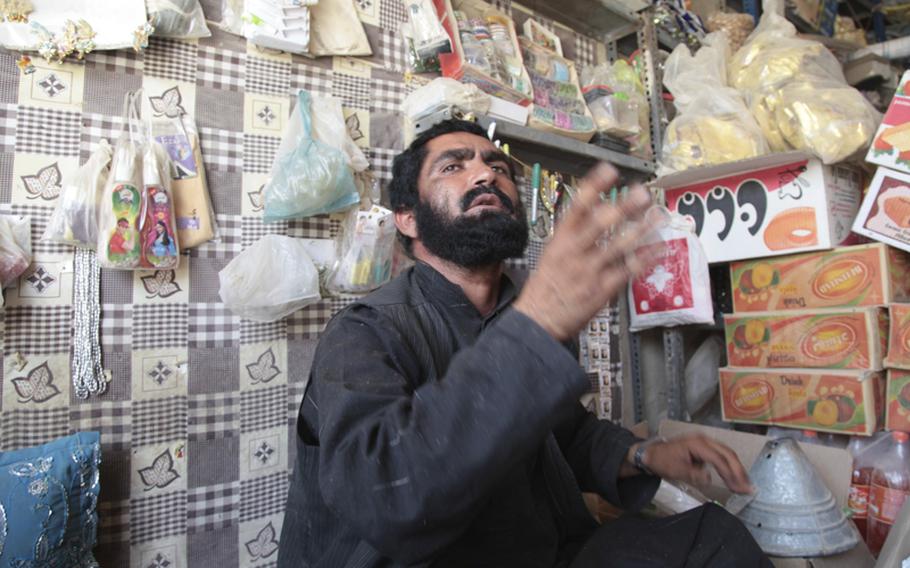 Buy Photo
Hayatullah, a shopkeeper, talks with a reporter in his shop July 31 near Patrol Base Durzay in southern Garmsir district. Afghan soldiers knocked everything from his shelves and shot up his shop after two of their own were reportedly shot and stabbed in the shop next to his. (Matt Millham/Stars and Stripes) Buy Photo
Mohammed Nabi, left, was at his father&#39;s store when two men shot and stabbed two Afghan soldiers at the shop next door. Nabi, 10, fled the store after he heard gunshots. Later, Afghan troops rampaged through his father&#39;s shop, shooting up his merchandise and his freezer, where there is still a hole. (Matt Millham/Stars and Stripes) Buy Photo
Yar Mohammed looks out his shop July 31. His store was ransacked by Afghan troops after two of their men were shot nearby. (Matt Millham/Stars and Stripes) Buy Photo
Qahar Farzan, an interpreter from Kabul who works with U.S. Marines in southern Garmsir district, Helmand province, translates during an interview with Yar Mohammed, a shopkeeper whose store was ransacked in June by Afghan troops after two of their men were shot nearby. (Matt Millham/Stars and Stripes)

DURZAY, Afghanistan &mdash; It&rsquo;s been more than a month since Afghan soldiers laid waste to the bazaar, cuffed Hayatullah&rsquo;s hands and beat him, but he is still too afraid to talk openly about it.

If he complains, he said, he&rsquo;s terrified the soldiers will come back and do it all over again. He&rsquo;s scared, too, of the Marines, who share a nearby base and observation post with Afghan soldiers.

The incident, precipitated by an insurgent attack on two Afghan soldiers who were in the bazaar without authorization, has all but erased the progress that U.S. Marines made in Durzay, taken by force in a southward push in January.

Though the Marines were not involved in the destruction or the assaults on Hayatullah and six or seven other men at the bazaar, the shopkeepers, at least, consider the Marines just as culpable because of their close association with Afghan forces.

&ldquo;There&rsquo;s definite resentment toward us now,&rdquo; 1st Lt. Nathan Fukuwa, the 25-year-old commander of 1st Platoon, said at a patrol base shared with Afghan troops just a few minutes&rsquo; walk from the bazaar. &ldquo;There&rsquo;s just a bitter taste in their mouth from the whole thing.&rdquo;

Musa, a bearded shopkeeper who sells shoes, clothing and random items he picks up at other bazaars, was reluctant to talk about the incident when a Marine patrol strolled through.

He was peddling in Lashkar Gah&rsquo;s bazaar when the raid happened, he said through a translator, but he was under the impression that the Marines helped the Afghan soldiers smash the corrugated metal door to his shop.

Asked about his relationship with the Marines and Afghan National Army soldiers after the raid, his eyes darted to the Marine-only patrol standing watch outside before he replied. &ldquo;We don&rsquo;t have any problems with them.&rdquo;

Without prompting, as if he&rsquo;d said it a thousand times, he added, &ldquo;There are no Talib.&rdquo;

Later, when the Marines were out of sight, he said there are Taliban all over the area, and that the presence of U.S. and Afghan forces did not make his situation better.

&ldquo;I&rsquo;m afraid of both of them,&rdquo; he said.

Around the corner, signs of the attack linger in Hayatullah&rsquo;s shop.

From a shelf he pulled down a metal funnel riddled with bullet holes.

Then he pointed to another bullet hole in his freezer.

Like Musa, he said, he was at Lashkar Gah&rsquo;s bazaar when two Taliban attacked the Afghan army sergeant and soldier.

The sergeant fled the scene, leaving his weapon, vest and soldier behind, and was shot in the buttocks as he ran.

After he limped a few hundred yards to his observation post on a hill, the Afghan soldiers there emptied out onto the bazaar and started breaking down doors, dumping shelves and spraying shop stalls with bursts from their U.S.-supplied M-16 rifles.

Fukuwa and his men arrived just after the gunfire started to find more than a half-dozen men, their hands cuffed, being beaten by the ANA, the lieutenant said.

When Hayatullah arrived back at his shop, he said, the bazaar was crowded with Marines and Afghan soldiers. An Afghan sergeant, he said, called him over.

&ldquo;What happened is then he punched me in the face and stomach,&rdquo; Hayatullah said through an interpreter.

&ldquo;I was very scared. My shop was destroyed. All the things were scrambled. They pointed a gun at me.&rdquo;

The soldiers interrogated him on and off for eight hours, mostly at Patrol Base Durzay, which they share with Fukuwa and his Marines, before releasing him. They told him not to return to the bazaar so he wouldn&rsquo;t be shot by ANA or Marines, he said.

He gave his interrogators nothing useful because he wasn&rsquo;t there when the soldiers were stabbed and shot, he said, but his 10-year-old son, Mohammed Nabi, was.

Nabi, who manned the store in his father&rsquo;s absence, was so shaken by the shooting, Hayatullah said, that he couldn&rsquo;t talk for almost a day after the incident. When his head finally cleared, he told his father the ANA had been into their shop twice before they were shot.

The first time, each had taken an energy drink without paying for it, Hayatullah said, adding the sergeant already owed the store 300 Afghani &mdash; roughly $7.

About 20 minutes later, the sergeant returned alone, without his weapon or flak vest, and took a bottle of cola, also without paying for it.

Afterward, the sergeant went to the adjacent shop, a blue-doored stall with a single phone connected to a satellite dish on the roof.

Ten minutes later, the boy heard the gunshots and &ldquo;breathed the gunpowder smoke,&rdquo; Nabi said through a translator.

&ldquo;I thought maybe somebody killed somebody,&rdquo; Nabi said, leaning against the bullet-scarred freezer. &ldquo;I ran home. I didn&rsquo;t stay here because I was too scared.&rdquo;

The Marines paid Hayatullah and most of the other shopkeepers for at least some of the damage to make amends and persuade them to reopen their stores, which were closed for days after the attack.

Hayatullah said the roughly $300 he received was nowhere near enough to cover what he lost, but he won&rsquo;t bring it up with either the Marines or the Afghan soldiers.

&ldquo;I am very angry, but I can&rsquo;t tell you I am angry because I am afraid,&rdquo; he said. &ldquo;This is my only income. This is how I make money to buy wfood and clothes. I feel weak because maybe the Marines or ANA will come here again&rdquo; and ruin the shop.

Then he wouldn&rsquo;t be able to support his family of 22, he said.

For their part, the Afghan soldiers appear unrepentant.

At a meeting Saturday, the senior Afghan soldier at Durzay shouted at local elders over the incident but made no apologies. He accused them of lying about the Taliban&rsquo;s retreat from the area, and said his men couldn&rsquo;t provide security if they didn&rsquo;t help him.

After the meeting, the soldier said the wounded sergeant had already been found guilty during a court martial &mdash; not of inciting an attack on innocent civilians, but of losing his weapon and flak jacket and disobeying an order to stay out of the bazaar &mdash; and sentenced to six years in jail.

Hayatullah, sitting on the floor of his shop a day later, said he would rather face the Taliban alone without any weapons than go to the Marines or Afghan soldiers for help.

&ldquo;It&rsquo;s just like starting at step one again,&rdquo; Fukuwa said. &ldquo;Something goes down, you start all over. But it&rsquo;ll get back.&rdquo;