In DOD race for approval, Android takes the lead 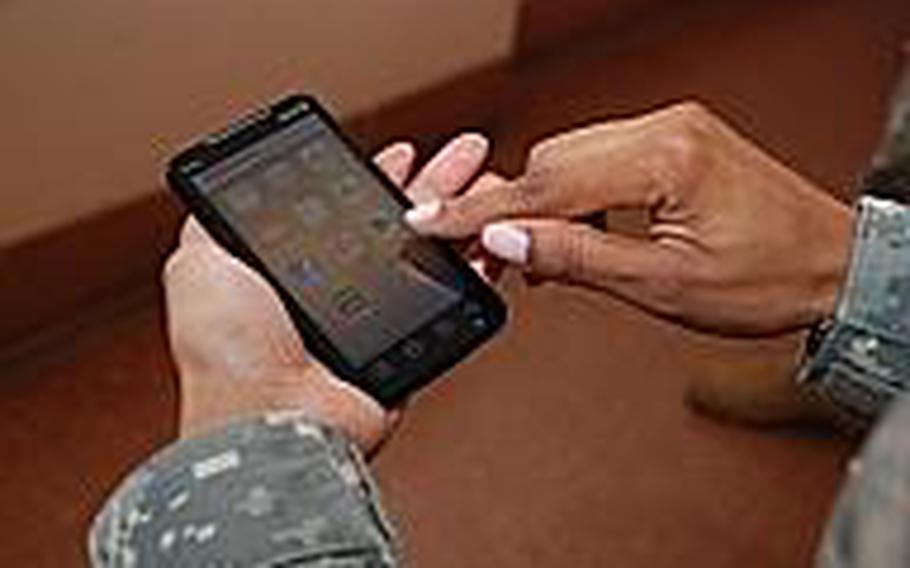 Capt. Tennille Scott of the Army's Mobile Applications Branch holds an Android phone, preparing to start one of dozens of ''military lifestyle'' apps the group has published for both Android and Apple devices. (Courtesy of the U.S. Army)

WASHINGTON &mdash; Up and down the halls of the Pentagon, the insistent flashing of that little red light tells the tale &mdash; the increasingly old fashioned-seeming Blackberry still rules inside the Defense Department.

But two newer operating systems that dominate the civilian smartphone world are waiting at the gates: Apple Inc.&rsquo;s iOS, which runs only the company&rsquo;s own wildly-popular iPhones and iPads; and Android, which was developed by a consortium headed by Google and runs on devices built by numerous firms.

Both operating systems are winding their way through the Pentagon&rsquo;s labyrinthine approval process, but Android seems to have pulled ahead in the race for DOD approval.

On September 13, the Defense Information Systems Agency, or DISA, approved Android for limited deployment for &ldquo;pilots and demonstrations,&rdquo; said William Keely, director of the DISA field security operations activity in an email to Stars and Stripes. By the end of October, remaining security issues should be worked out and DISA expects to issue a Security Technical Implementation Guide, or STIG, detailing how certain Android devices can be used in DOD operations.

Although DISA says it can&rsquo;t divulge what the expected STIG will allow, experts say the first use of new smartphones will likely be secure email, text messaging and perhaps some web browsing. For security reasons, it will be a far cry from the full spectrum of authorized data access possible with desktop computers wired to military networks.

A STIG for iOS is on hold, meanwhile. Keely said DISA &ldquo;has provided Apple a list of issues that must be addressed before iOS devices can be more widely deployed in the DOD.&rdquo; Some experts, however, said that Apple&rsquo;s next iOS version, announced with the new iPhone 4S on Tuesday, may soon hurdle many of the remaining security issues.

Neither Apple nor Google responded to requests for interviews from Stars and Stripes.

Android may have an edge because its open-source operating system software can be configured for security by DOD programmers, while Apple&rsquo;s code is controlled solely by Apple. When it was announced in early 2011 that a first-generation Army tactical smartphone, the Joint Battle Command-Platform, would be based on Android, headlines seemed to imply Google&rsquo;s OS was the Army&rsquo;s choice going forward.

But in reality, neither the Army nor the broader Pentagon has gone completely over to Android, said Lt. Col. Gregory Motes, who develops both Android and iPhone apps as head of the Army&rsquo;s Mobile Applications Division. The jury is still out, and other systems like Windows Mobile 7 might enter the fray.

Unlike Android devices, iPhones and iPads don&rsquo;t run commercial antivirus software, something Pentagon cyberdefense experts would likely see as a drawback, he said. On the other hand, Apple&rsquo;s tightly controlled business model &mdash; only allowing software purchased through Apple to run on the phones and preventing third party software like antivirus programs from controlling the devices &ndash; could reduce some types of cyber risk.

The Army is keeping its options open, actively working with each company offering a smartphone option, Motes said. The companies, while receptive, he said, know their main market lies in the consumer world.

&ldquo;We&rsquo;ve been out to visit Apple and Google and Microsoft,&rdquo; he said. &ldquo;Each is very interested in what our needs are, and how they can accommodate our needs within their consumer markets.

&ldquo;None of them is giving us the keys to their kingdom &ndash; because if it were up to use we&rsquo;d make a device that&rsquo;s too secure for a consumer because of our different priorities and different threats &ndash; but they&rsquo;re not shutting the door on us either.&rdquo;