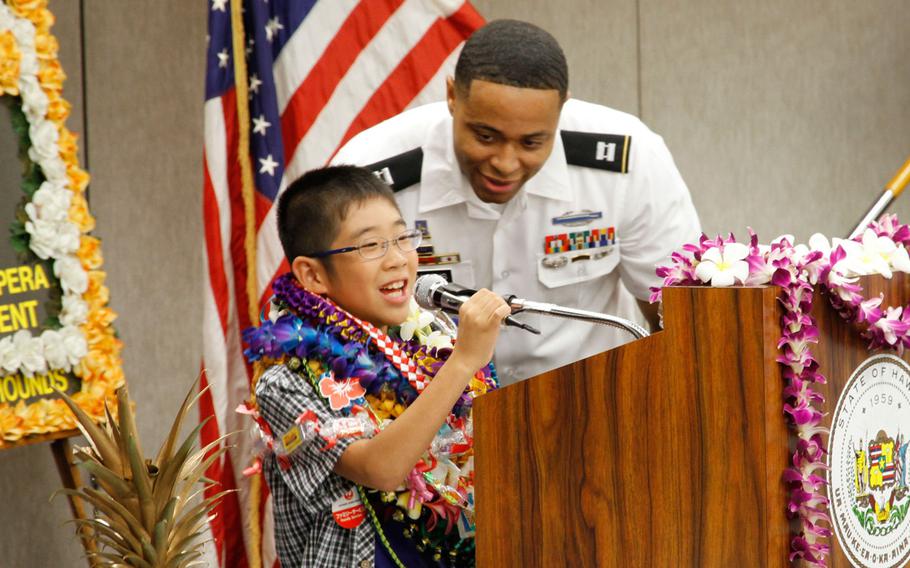 Buy Photo
Kirito Uchikaneku introduces himself during a reception at the Honolulu airport July 29, 2016, as Capt. Joseph Simmons looks on. (Wyatt Olson/Stars and Stripes)

Buy Photo
Kirito Uchikaneku introduces himself during a reception at the Honolulu airport July 29, 2016, as Capt. Joseph Simmons looks on. (Wyatt Olson/Stars and Stripes) Buy Photo
From left, Kumiko Yasui, Mihi Tazawa, Yosuke Yamaguchi and Kirito Uchikaneku hold gifts given to them at a reception at the Honolulu airport July 29, 2016. The four 11-year-olds live at the Holy Family Home orphanage in Osaka, Japan, and arrived to spend two weeks with families of the 27th Infantry Regiment. (Wyatt Olson/Stars and Stripes) 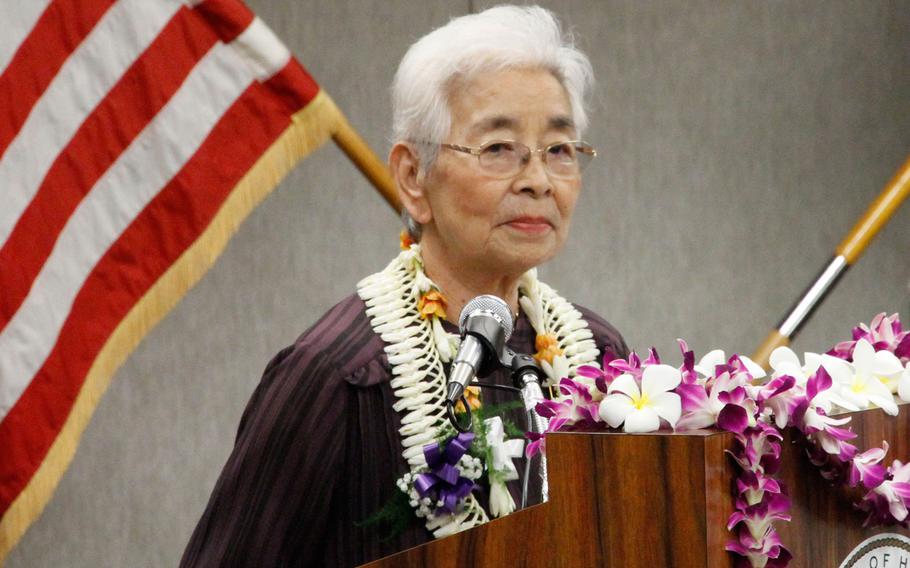 Buy Photo
Yuko O'Reilly, the mother of the Wolfhounds, speaks during a reception at the Honolulu airport July 29, 2016. She is the widow of Hugh F. O'Reilly, the soldier who ignited the decades-long commitment by the 27th Infantry Regiment to improve the lives of orphans at the Holy Family Home in Osaka, Japan. (Wyatt Olson/Stars and Stripes)

FORT SHAFTER, Hawaii — Members of the 27th Infantry Regiment have received Medals of Honor for heroic actions in battles going back as far as the Spanish-American War.

Dubbed the “Wolfhounds,” they liken their fighting prowess to the snapping jaws of their mascot.

But each summer, the Hawaii-based Wolfhounds reveal a softer side, hosting a group of Japanese orphans for several weeks.

For the past 59 years, families of the regiment have taken in orphans from the Holy Family Home in Osaka, Japan. On Friday, two boys and two girls, all age 11, were greeted at Honolulu airport by a gathering of soldiers, VIPS and an 86-year-old woman referred to as “the mother of the Wolfhounds,” Yuko O’Reilly.

“I feel so deeply whenever I talk about the Wolfhounds; my eyes begin to water,” O’Reilly said during the reception for the orphans. “And not because of age,” she added jokingly.

She is the widow of Hugh F. O’Reilly, who died at age 91 in 2006 and is credited with igniting the regiment’s involvement with the orphanage in the years just after the end of World War II.

By the time the four children reached the table of honor at Friday’s reception, they had received so many leis that they appeared to be wearing neck braces.

The children, Kumiko Yasui, Mihi Tazawa, Yosuke Yamaguchi and Kirito Uchikaneku, will split their time between several host families for two weeks, with outings planned to an aquarium, beaches, museums and restaurants.

Fundraising and organizing for the visits are done by Peace Bridge, a volunteer organization set up by the O’Reillys’ son in 2007 in order to continue the tradition begun by his father.

O’Reilly grew up as a street tough in the Bronx and joined the Marines in 1932. He fought in some of the fiercest battles of World War II, including Guadalcanal.

After the war ended in 1945, he enlisted in the Army and served as a platoon sergeant assigned to the 1st Battalion, 27th Infantry Regiment at Camp Sakai near Osaka.

During Christmas in 1949, O’Reilly was among a group of soldiers accompanying a Red Cross worker to a holiday party at the Holy Family Home. They were appalled at the conditions in which the children were living.

“What they saw that day changed their lives,” said Keoni Wagner, president of Peace Bridge.

O’Reilly was especially moved and pressed his fellow soldiers into collecting money for the orphanage, raising $143 and donating it by New Year’s Day.

Over the following year, the Wolfhounds virtually adopted the orphanage, helping with repairs. The soldiers continued to raise and donate money, even after being sent to the Korean War in the early 1950s.

The 1955 film “Three Stripes in the Sun” was based on the regiment’s involvement with the orphanage, with Aldo Ray portraying O’Reilly. O’Reilly and his wife eventually settled in Oahu, where he became a banker.

In 1957, the Wolfhounds sponsored two orphans for a visit to Hawaii, and that tradition has continued to the present.

“It’s this legacy of love for the children of Osaka that defines this unit,” said Robert Kroning, representing the Honolulu mayor’s office at the reception.