In central Iraq, building a base camp amid the sandstorms 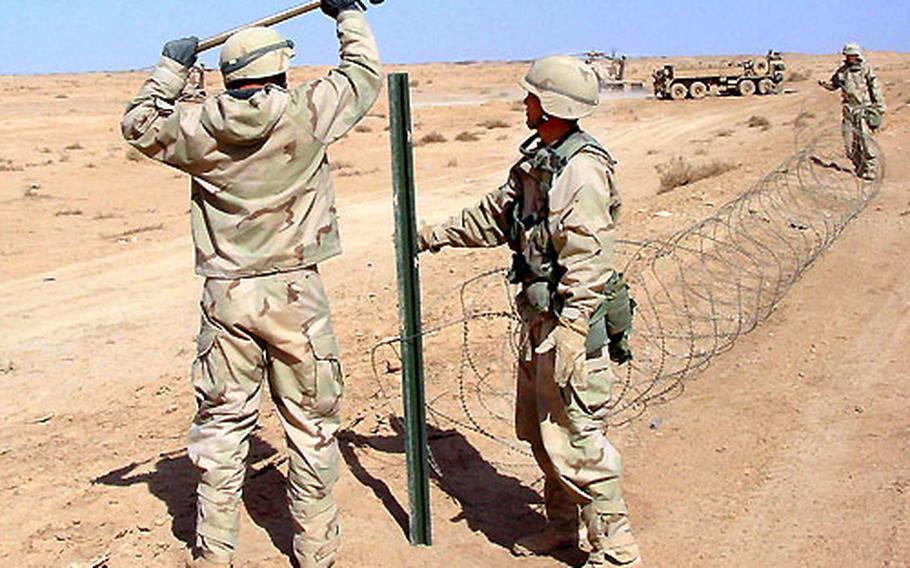 Soldiers from the 2nd Squadron, 6th Cavalry Regiment and the 7th Battalion, 159th Aviation Regiment — both based in Illesheim, Germany — lay concertina around the new Army aviation base camp in central Iraq. (Steve Liewer / S&S)

Soldiers from the 2nd Squadron, 6th Cavalry Regiment and the 7th Battalion, 159th Aviation Regiment — both based in Illesheim, Germany — lay concertina around the new Army aviation base camp in central Iraq. (Steve Liewer / S&S) 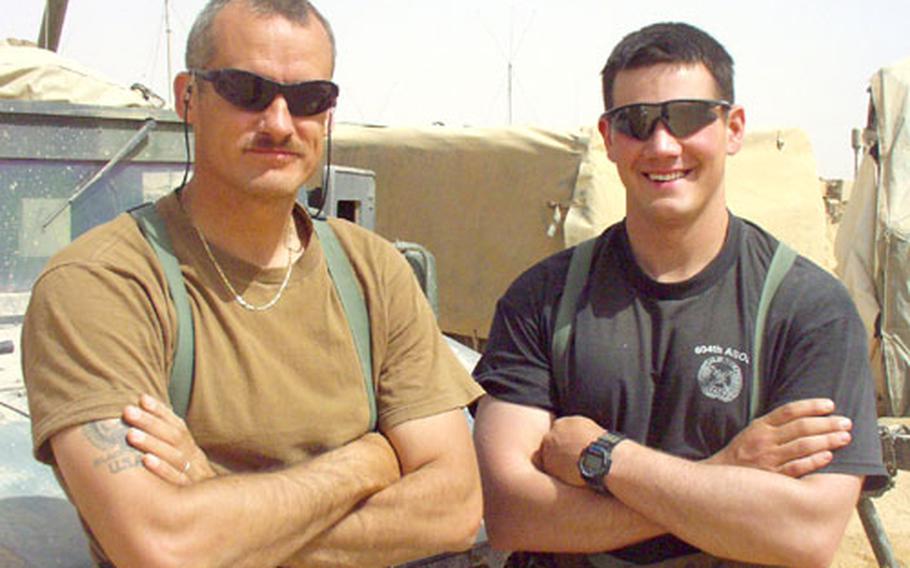 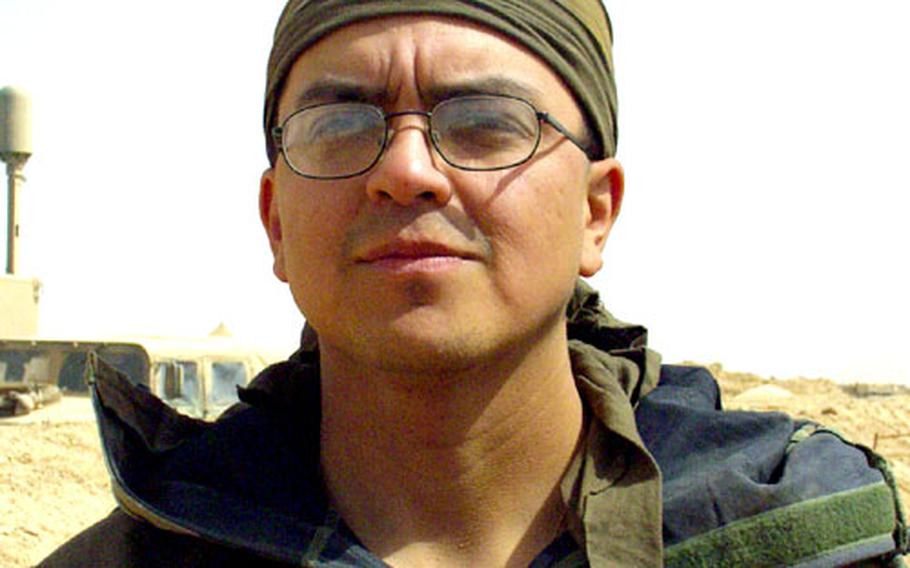 Staff Sgt. Jose Estrada, 33, the day-shift noncommissioned officer-in-charge with the 5th Battalion, 158th Aviation Regiment, says that "when we got here and saw the red storm, we thought we were on Mars." (Steve Liewer / S&S) 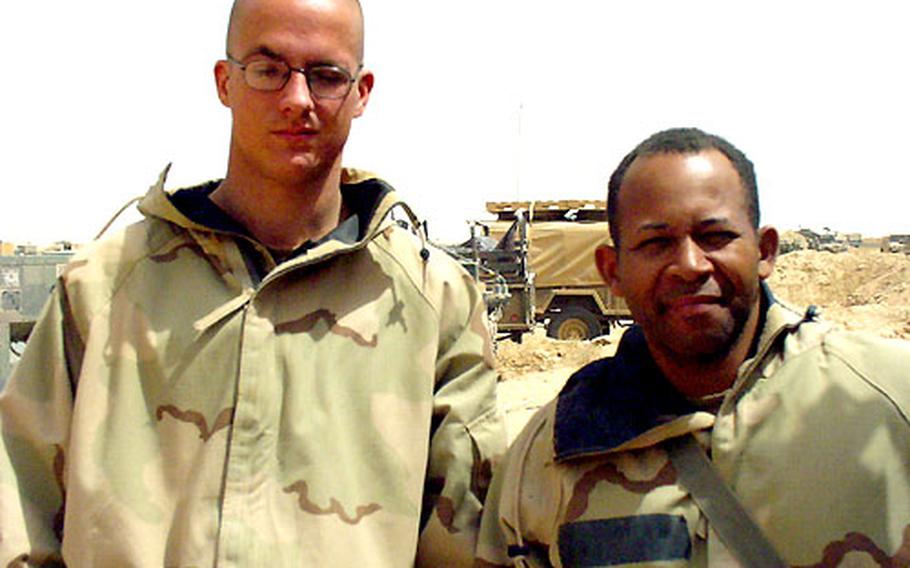 They arrived at their bleak new base camp last week after an exhausting and sometimes perilous three-day journey from Kuwait. Almost as soon as they arrived, sandstorms set in that barely let up for three days.

A few days of pleasant weather have caused troops to look upon their surroundings a little more charitably. Soldiers have coined a term for it: &#8220;embracing the suck.&#8221;

The 7-square-mile outpost is as sandy as Camp Udairi, the post 11th Aviation left behind in Kuwait. But it&#8217;s not as remote.

There are towns within a few miles. Part of the property is a wheat field, and near the units&#8217; command tents there is a windbreak made of palm trees.

Lt. Col. Glenn Barr, deputy commanding officer of the task force, said the spot was chosen well before the invasion because it is close to some significant paved roads. That way, heavy trucks such as fuel tankers could get there easily from Kuwait.

The command tents lie at one end of a rutted lane that leads to the aircraft of the three Apache and one Black Hawk units that share the base:

the 5-158 Aviation from Giebelstadt, Germanythe 2nd Squadron, 6th Cavalry Regiment, an Apache unit from Illesheim, Germanythe 6th Squadron, 6th Cavalry Regiment, an Apache Longbow unit from Illesheimthe 1st Battalion, 227th Aviation Regiment from Fort Hood, Texas.The helicopters are scattered rather widely. They can&#8217;t be parked too close together because they raise enormous clouds of dust when they come and go.

One Longbow already was badly damaged when it made a hard landing during brown-out conditions.

Barr said engineers from the 864th Engineer Battalion, from Fort Lewis, Wash., put landing pads at the top of their list of improvements for the new base.

Even though they had been rushed to Iraq on short notice and with little gear, and despite the sandstorms, the engineers went straight to work early last week. The task force is giving them food, water and tents.

The Army has purchased gravel from a nearby quarry to lay down 90-foot-square pads for the each of the helicopters. Then they soaked the pads with JP-8 jet fuel, which moistens the dirt for longer than water and doesn&#8217;t burn too easily.

At the same time, the engineers are bulldozing the sand into protective berms to discourage Iraqi irregulars from penetrating the base. They are working to enclose the field&#8217;s entire perimeter inside the wall of sand.

A public paved road runs along the edge of the camp. Before the task force arrived, Barr said, it had hoped to use the road as a landing strip. Examined up close, it proved too narrow.

The road is a logistical asset but a security problem. It allows trucks to drive right up to the airfield, but it also lets potentially hostile Iraqis come close. Barricades have been set up on each end of the road, and all Iraqi vehicles passing through are searched.

The engineers&#8217; other job is to improve facilities for soldiers. They have dug latrine pits and built crude field showers for each of the units to make it a bit more livable. The lack of toilets had been the most serious inconvenience, especially for female soldiers.

Soldiers have noticed the efforts.

Air Force Master Sgt. Jim Burt, who serves at Conn Barracks in Schweinfurt, Germany, with Detachment 2 of the Air Supply Operations Squadron, spent the first Gulf War with an armored cavalry regiment. Back then, they ringed their tanks and slept on cots inside. Once they went two weeks eating nothing but chili and rice.

Burt and his W&#252;rzburg-based partner, Staff Sgt. Matthew Muse, 26, of Finksburg, Md., are accustomed to the Air Force&#8217;s high-quality barracks, but they don&#8217;t mind the rough conditions.

There are no televisions and few radios at the base. Many of the DVDs and board games that filled idle time at Camp Udairi have been left behind.

The camp still lacks a chow hall or a post exchange, and Barr said there are no plans to build them. Unlike Camp Udairi, which is being built for permanent use, this camp will be abandoned when it is no longer needed.

The soldiers will jump off and build a new camp.