In case you forget that resolution to eat healthy ... 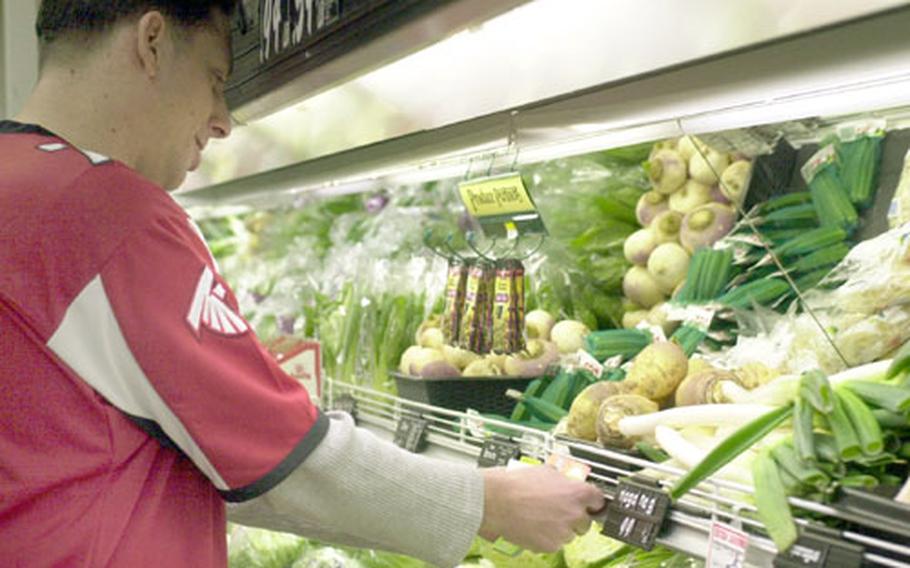 Marcus Hunt, customer service manager, places tags Friday to let customers know what is healthy to buy at the commissary at Yokosuka Naval Base, Japan. (Christopher B. Stoltz / S&S)

YOKOSUKA NAVAL BASE, Japan &#8212; Everyone wakes up on the morning of Jan. 1 filled with good intentions, such as shedding pounds and making healthy eating choices.

This year, however, commissaries worldwide are attempting to help the newly resolved stick to their guns by strategically placing messages in the aisles.

Dietary tips and signs will remind shoppers: &#8220;It&#8217;s Your Choice, Make it Healthy.&#8221; The tips are based on the new &#8220;Dietary Guidelines for Americans&#8221; from the U.S. departments of Agriculture and Health and Human Services. They&#8217;ll be near pizza and frozen entrees, juice, dairy, canned vegetables and fruits, oils and fats, cereals, bread, pasta, rice, canned meats, snack foods and dairy areas.

The Yokosuka Commissary will have an estimated 500 signs in place when it reopens Jan. 2, Merriweather said.

Patrick B. Nixon, chief executive officer and acting director of the Defense Commissary Agency, calls the program &#8220;food for thought.&#8221;

According to a Weight Watchers survey, almost half of U.S. women are resolving to lose weight in 2006. Almost all of them say they could use some help.

And most men and women in the military, where maintaining health and fitness is part of the job, also have health on the their minds when it&#8217;s time to make resolutions, said Petty Officer 1st Class Rodney Berg, who was shopping in Yokosuka&#8217;s commissary on Friday.

Cynthia Griffith, also shopping in the commissary on Friday, said although she&#8217;s already altered her eating habits, the signs might be good for someone still sitting on the nutritional fence.

All 268 DECA commissaries worldwide are being encouraged to participate.