In blog, Stavridis pushes for multilingual US military officers 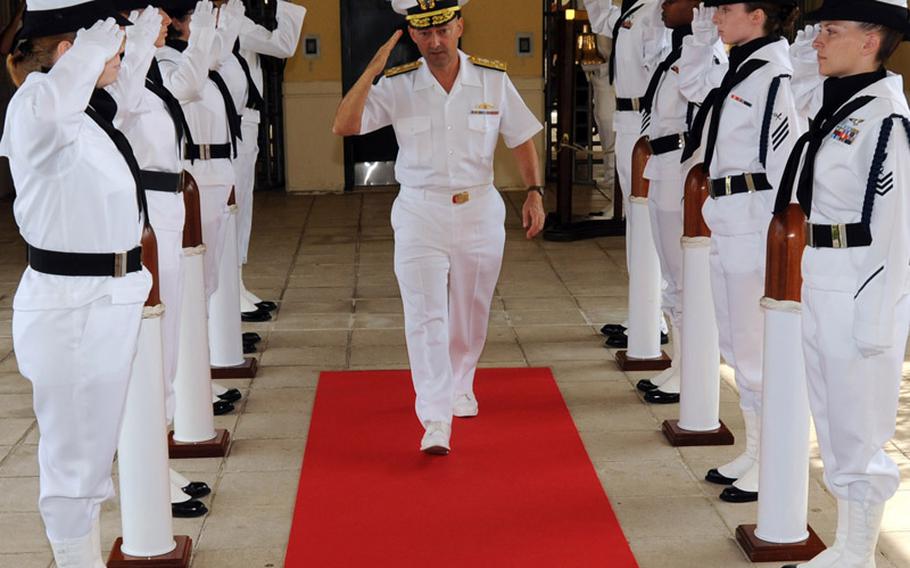 Adm. James Stavridis, commander of the US European Command, formally arrives at the US Naval Forces Europe-Africa/US 6th Fleet headquarters on Naval Support Activity Capodichino in Naples in this 2009 photo. (David Holmes/U.S. Navy)

STUTTGART, Germany — Should knowing a second language be a requirement to serve as an officer in the U.S. military?

Perhaps, argues U.S. European Command boss Adm. James Stavridis, who says the Defense Department must do a better job of building a more culturally savvy military. Stavridis, who is slated to retire later this year, is offering tips on how to accomplish that.

“The U.S. Department of Defence is a massive organization with the widest imaginable set of skills represented among its 3.2 million military and civilian shipmates,” writes Stavridis in the latest post on his From the Bridge blog. “Yet less than 10% of us speak a second language — an obvious capability gap in an organization that operates globally to accomplish its mission.”

Stavridis, who also serves as NATO’s supreme allied commander, says the Defense Department should focus on three areas if it wants to strengthen the foreign language skills and regional expertise of servicemembers:

• Strengthen various language programs, perhaps requiring all officers to know a second language at a minimum and provide incentives and training to support the effort. Also study at what level in the enlisted career path similar training should occur.

• Offer a general officer career path to foreign affairs officers in each of the services, ensuring that the “best and brightest” can be recruited into that career path.

• In addition to Afghan-Pakistan Hands, a program founded in 2009 that aims to build a cadre of military and civilian language and culture experts on the region, similar initiatives should be established in the other parts of the world, such as the Pacific, Africa and Central America. These troops would be the military’s “special forces” in the world of global engagement, according to Stavridis.

“This is an area in which we have much work to do,” Stavridis writes. “As opposed to many of our European partners, who effortlessly speak four or five languages and have a deep knowledge of each other’s background and culture, we in the U.S. are failing to fully train and prepare for this kind of international work.”

In the case of Stavridis, a speaker of French and Spanish and a student of Portuguese, language is clearly a passion. At his EUCOM headquarters in Stuttgart, he was instrumental in getting a new language center set up in 2012 for command staff.

However, are Stavrdis’ suggestions realistic, given the difficulty many face in acquiring second language fluency, or anything close to it, as adult learners?

An enormous amount of research has been done on the challenges associated with second language acquisition. And while there is no “silver bullet” to success, key factors involve a mix of motivation, time commitment and aptitude, according to experts.

“To teach everyone a foreign language would require a lot of resources,” said Kjersti Faldet Listhaug, an expert on language acquisition at the Norwegian University of Science and Technology. “It depends on what you want to achieve. Is it to communicate with people in Afghanistan or to negotiate complex agreements?”

While building an officer corps of perfectly fluent second language speakers might be a stretch, basic language skills are quite achievable if students are willing and motivated, Listhaug said. “It’s possible to speak a second language later in life very well,” she said. “But it’s going to take some time.”

For Stavridis, multilingual troops with knowledge of the cultural terrain are the best problem-solvers when faced with tough missions abroad.

“Throughout my seven years as a Combatant Commander, both at Southern and European Command, and with NATO operating in Afghanistan, I’ve learned that the shipmates who truly have the language, culture, and regional skills are often ‘silver bullets’ that can transform a difficult challenge into a success,” Stavridis said in his blog.