In Belgium's annual Battle of the Bulge tribute, thanks but no tanks 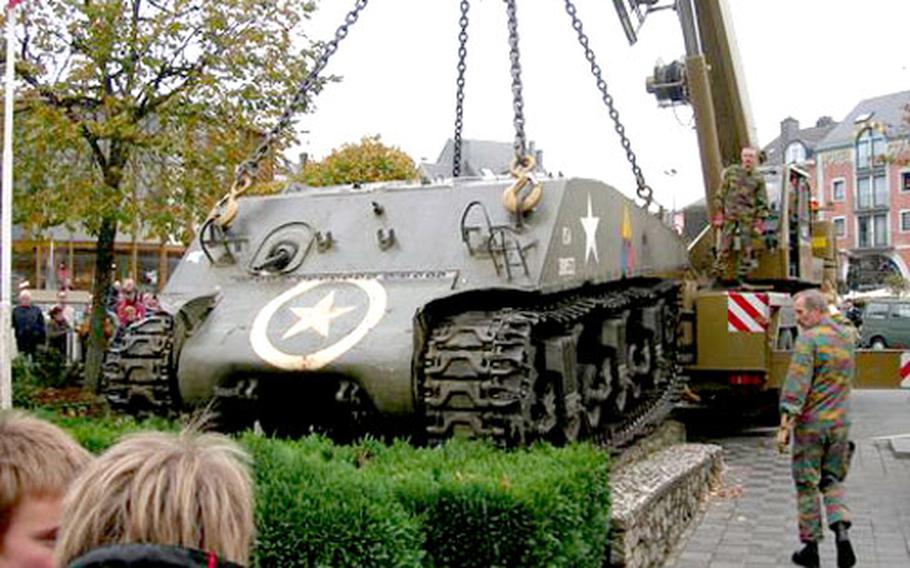 Belgian workman prepare to lift a partially disassembled Sherman tank from its site in Bastogne, Belgium, so it can be taken to a nearby Belgian military base for a six-month refurbishment. The tank was used by the U.S. in World War II. (Photo courtesy of U.S. Army Garrison Benelux)

A walk, three wreaths and 60 pounds of walnuts sum up next month&#8217;s annual commemoration of the Battle of the Bulge in Bastogne, Belgium.

But for the first time in nearly a half-century, a gritty, steely veteran of the war will miss the observance, scheduled this year for Dec. 16.

The 11th Armored Division tank, knocked out of the war on Dec. 30, 1944, near the village of Renuamont, is undergoing a six-month refurbishment at a nearby Belgian military base.

Meanwhile, an effort is under way to find a replacement, possibly from one of the many World War II re-enactment groups that return each year, Baneton said.

During the one-day observance, which shifts from year to year to keep it a weekend affair, Bastogne becomes a magnet for re-enactors. This year&#8217;s event falls on the actual anniversary of the beginning of the battle.

The Battle of the Bulge, the largest land battle in Army history, involved a series of engagements over several hundred miles from Dec. 16, 1944, to Jan. 25, 1945. U.S. forces incurred 19,000 deaths and more than 1 million combatants took part.

Bastogne, a strategic crossroad in Germany&#8217;s quest to turn the tide after its defeat in Normandy, became an enduring symbol of grit and courage when the U.S. Army held the city despite being encircled for several days.

The Belgians have never forgotten.

The crowd is one reason Larscheid is asking people to sign up early for the walk.

The memorial walk covers a different section of the Allied perimeter around Bastogne each year. This time the route goes north of Bastogne, to villages such as Foy and Noville. The area was defended by the 506th Parachute Infantry Regiment, immortalized in the TV series &#8220;Band of Brothers.&#8221;

Walkers have their choice of three distances: six, 14 or 20 kilometers.

Larscheid said re-enactors plan to man foxholes along the route.

A group of Boy Scouts from Heidelberg, Germany, will have the honor of laying a wreath &#8212; one of three planned for the day &#8212; along the route, he added.

In the afternoon after the walk, city officials joined by special guests will toss walnuts to crowds gathered below the town hall balcony. It is a tradition that predates the battle, but it is now included in the commemoration.

For more details on all the events, see http://bastogne.jemesouviens.fr/. There is an English option on the main page.