In Baumholder, waiting is the hardest part 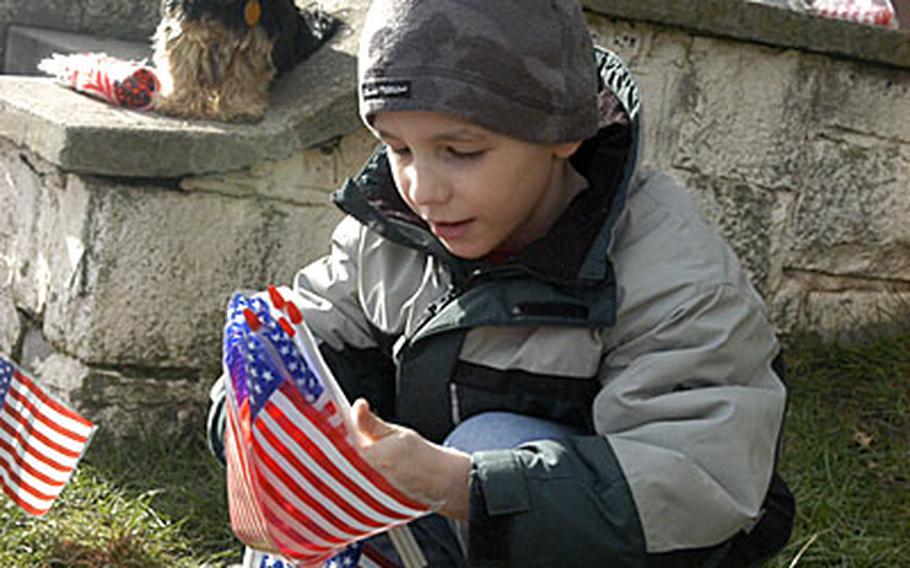 Eight-year-old Cory Schreiber Jr. helps place flags to greet his dad, Sgt. Cory Schreiber, and the other soldiers of Company A, 1st Battalion, 6th Infantry at Smith Barracks in Baumholder, Germany, on Friday. Unlike the rest of the Baumholder-based 2nd Brigade of the 1st Armored Division, the approximately 150 company soldiers are still in Iraq and headed home any day now. They deployed with and were attached to the 1st AD&#39;s 1st Brigade, out of Friedberg, Germany, since January 2006. (Geoff Ziezulewicz / S&S)

BAUMHOLDER, Germany &#8212; Make no mistake, the spouses of the 1st Battalion, 6th Infantry&#8217;s Company A were happy when the other 2nd Brigade soldiers of the 1st Armored Division came back here late last year.

That return just didn&#8217;t include their loved ones.

The roughly 150 soldiers with the Company A Raiders are still in Iraq. Deployed with and attached to the the 1st AD&#8217;s Friedberg-based 1st Brigade since January 2006, the last 1-6 troops out there are still waiting their turn to be back in Baumholder. They are due back any day now.

While the Baumholder community dealt with its own deployment in the past year, some family members from Company A inevitably felt a stronger link with the Army community in Friedberg, whose brigade also was gone and whose mission the company was helping to carry out.

While deployment difficulties are not new to military families, the two brigade tours made things different. The families of Company A troops were not living the developments of other Baumholder family members.

The 2nd Brigade deployed in late 2005, spending the first months as a standby force in Kuwait. It returned as scheduled in November.

The 1st Brigade deployed in January 2006, immediately heading into Iraq and the treacherous Anbar province. Late last year, word came of an approximately six-week deployment extension that delayed the homecoming.

&#8220;Our community was just going through different things,&#8221; said Brandi Harrison, who heads up the company&#8217;s family readiness group of about 40 spouses.

Within the company, there have been &#8220;upward&#8221; of 30 casualties, including the deaths of four Raider soldiers, according to company 1st Sgt. Flynn Broady, who&#8217;s in Baumholder.

Though the company was often in remote locations, often with only one phone and no Internet, there was still plenty of spouse support whenever possible, Broady said, recalling the happiness when a videophone was connected so that soldiers could chat with family members.

Despite the difficulties, company families got help from both the Baumholder and Friedberg communities, Harrison said. The 1-6 was especially supportive, having the company wives involved in dinners and other events.

As with most company soldiers, this was the second deployment for Harrison&#8217;s husband, Staff Sgt. Jason Harrison.

But now it&#8217;s almost over, and Schreiber said she can barely wait to cook her husband some pierogies.