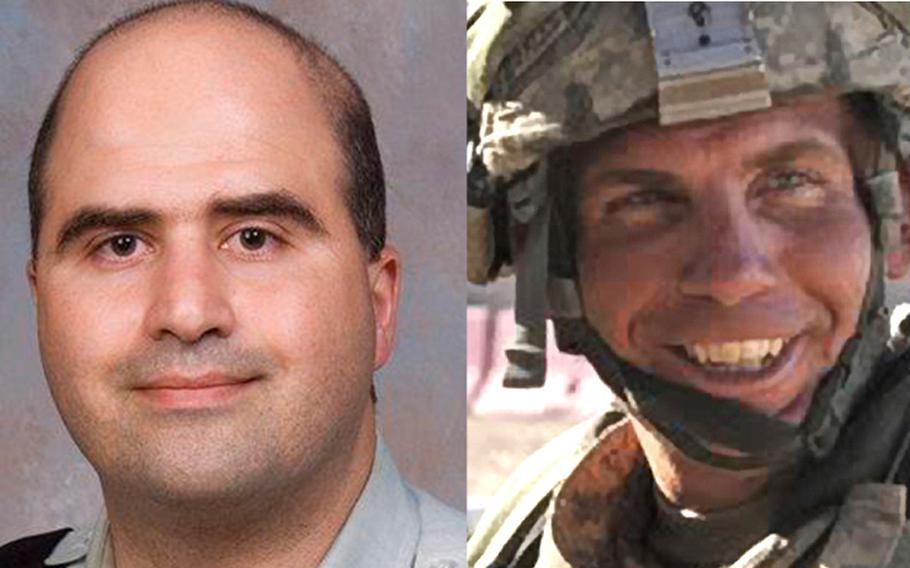 WASHINGTON — One soldier was accused of stalking into the darkened homes of Afghan villagers and massacring 16 men, women and children, burning some of the bodies before returning to base.

Although the body counts were similar, the cases are headed down different legal pathways, with the possibility of vastly different outcomes for the defendants.

Sgt. Robert Bales on Wednesday avoided the death penalty by pleading guilty to the 2012 murders of Afghan civilians and other crimes under an agreement with military prosecutors at Joint Base Lewis-McChord, Wash. Under the Uniform Code of Military Justice, defendants can’t plead guilty to capital crimes.

But a similar move to enter a guilty plea by Maj. Nidal Hasan, charged in 2009 Fort Hood mass shooting, was denied by a military judge in March. The ruling left the death penalty on the table.

So why do military authorities choose to accept guilty pleas in some mass killing cases but not in others? A range of legal experts contacted by Stars and Stripes pointed to key differences between the two cases — including the fact they are coordinated by different commanders.

“First of all, you have two different convening authorities,” said retired Maj. Gen. John Altenburg, a former Army deputy judge advocate general who now practices as an attorney in Washington, D.C. “There’s not some monolithic attorney general in the sky who makes all the decisions.”

Prosecutors are faced with practical decisions about the difficulty and expense of death penalty prosecutions, and sometimes conclude it isn’t worth it, said Eugene Fidell, a military legal expert who teaches at Yale University and is a former president of the National Institute of Military Justice.

“There’s a calculus that goes into how a particular offense is handled, and it’s inevitably going to vary from case to case, depending on such considerations as the gravity of the crime … difficulty of obtaining witnesses’ cooperation, views of victims and their loved ones, and sheer expense to the taxpayers,” Fidell said in an email. “If prosecutors consider a capital sentence a long shot, they may not even bother to seek one.”

The killings to which Bales admitted took place in the darkness of night, in the presence of witnesses who don’t speak English and who may not be able or willing to testify, Altenburg noted. The fact that the bodies were quickly buried thousands of miles from the United States makes the case even more difficult, he said.

None of those difficulties apply to in the Hasan prosecution, he said.

Another complication, said Greg Rinckey, a military defense attorney in private practice, is the question of whether Bales’ legal team could have defended the combat veteran by raising the possibility he suffered from post-traumatic stress disorder.

A claim of PTSD also arose in the case of Sgt. John Russell, who pleaded guilty to killing five soldiers in 2009 at Camp Liberty, Iraq, thereby avoiding a death sentence.

A question of fairness

Rinckey said political motivations could have played into the decision. Victims have pushed for Hasan — who officials say corresponded with an al-Qaida linked cleric before the shooting and shouted a battle cry in Arabic before the attack — to be tried as a terrorist combatant. While Defense Department officials have declined to take that step, they have little incentive to cut a deal with him, he said.

“They want the death penalty,” he said. “I’m sure there is some political reason that plays into why one gets (a pretrial agreement) and one doesn’t”

But Fidell and Altenburg both said they doubt any bias against Hasan played into it.

“These cases are so different I think it is obvious why a prosecutor would accept a plea deal in one but not in the other,” Altenburg said.

Should Hasan be convicted of capital murder, he may be able to use Bales’ plea deal to argue during sentencing and in appeals that he’s being singled out for killing Americans rather than Afghans, Rinckey said.

“How do we value a life — is an American life valued more than an [Afghan] national?” he said. “As a defense attorney, absolutely I’m going to make that argument.”