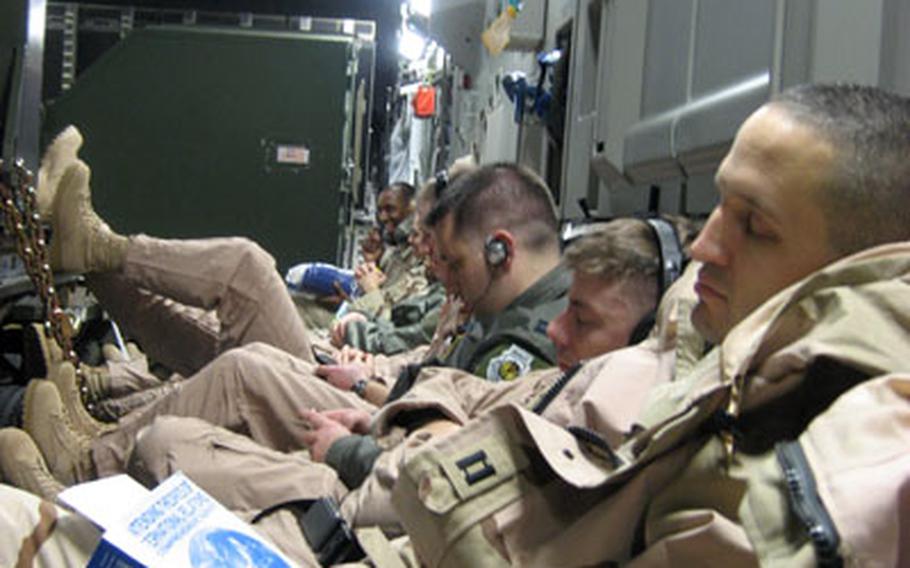 Misawa airmen snooze on the way to Iraq. An advance team of Misawa airmen rode a C-17 cargo plane en route to Balad Air Base. The airmen arrived in theater on Jan. 10, about a week ahead of the 400-some maintainers, pilots and other personnel deployed to Iraq from Misawa in support of the 14th Fighter Squadron. (Photo courtesy of U.S. Air Force)

Misawa airmen snooze on the way to Iraq. An advance team of Misawa airmen rode a C-17 cargo plane en route to Balad Air Base. The airmen arrived in theater on Jan. 10, about a week ahead of the 400-some maintainers, pilots and other personnel deployed to Iraq from Misawa in support of the 14th Fighter Squadron. (Photo courtesy of U.S. Air Force) 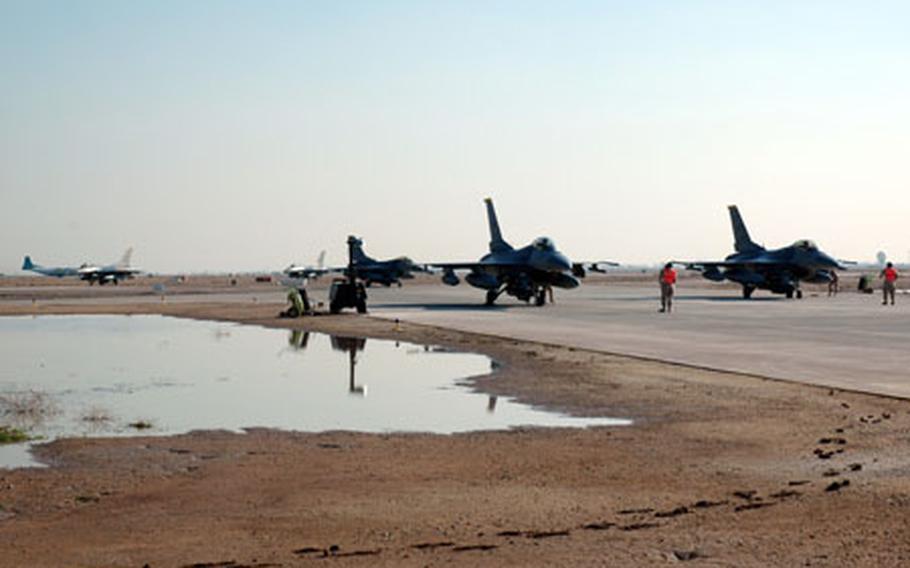 Since deploying to Balad Air Base, Iraq, Misawa’s airmen have dealt with mud and rain. The area’s fine soil turns into a thick, pasty mud when it rains, getting into almost everything. (Photo courtesy of U.S. Air Force)

Less than two weeks after arriving in Iraq, the 14th Fighter Squadron commander says Misawa&#8217;s airmen have been extremely busy flying and supporting combat sorties and waging battle against mud and dust.

&#8220;We are now &#8216;in the groove&#8217; of our daily 24-hour operations, flying a full schedule of combat missions in support of the coalition ground forces,&#8221; Lt. Col. Chuck Toplikar, the 14th Expeditionary Fighter Squadron commander for this deployment, stated in an e-mail Monday to Stars and Stripes.

More than 400 maintainers, pilots and other Misawa personnel are deployed to Balad Air Base, Iraq. About 42 miles north of Baghdad, it&#8217;s one of the country&#8217;s largest air bases.

Toplikar is keeping families and friends of the deployed Misawa airmen informed of their progress through a weekly, unclassified phone recording that can be heard by calling DSN 315-226-1400.

In his most recent message, for the week of Jan. 22-29, Toplikar discusses a range of topics, from the weather and rumors to mortars and mice. Most importantly, he notes no one has been injured in attacks on the base and no sorties have been lost in combat.

Earlier in the deployment, rain and mud were a problem, Toplikar stated in the e-mail.

The soil at Balad consists of very fine powder and rocks with little drainage, natural or man-made, he stated.

&#8220;When it rains, even a little bit, the water puddles up everywhere and the soil turns the consistency of paste or mixed concrete.&#8221;

On Monday, Mother Nature dished up a dust storm that reduced visibility to less than a quarter-mile, Toplikar said, observing, &#8220;The fine dust gets everywhere and into everything.&#8221;

In his last phone update, he addressed recent rumors that Misawa airmen could remain in Iraq longer, not returning to Misawa until early to mid-June instead of sometime in May.

All are F-16 squadrons flying the same missions, Toplikar said, though the jets have slightly different capabilities based on their specific F-16 model. The 14th&#8217;s jets are the first &#8220;Block 50&#8221; F-16s to deploy to Iraq, according to military officials.

The 14th flew its first combat missions on Jan. 22.

&#8220;We have employed ordnance and, so far, all munitions have hit their designated targets, a testament to the professionalism and expertise of everyone in the chain, from ammo and weapons loaders, to aircraft maintainers, to ops support and life support personnel, to the pilots who complete the final link in the chain when they push the pickle button,&#8221; Toplikar stated.

Pilots have been using targeting pods on the F-16 to support coalition ground forces with nontraditional intelligence, surveillance and reconnaissance &#8212; locating roadside bombs, in some instances &#8212; and precise ordnance employment, Toplikar said.

&#8220;Everyone knows their job and knows what to do in the event of any attack on the base, so our operations have stood up very smoothly and safely.&#8221;