In Baghdad's Green Zone, the glimmer is gone 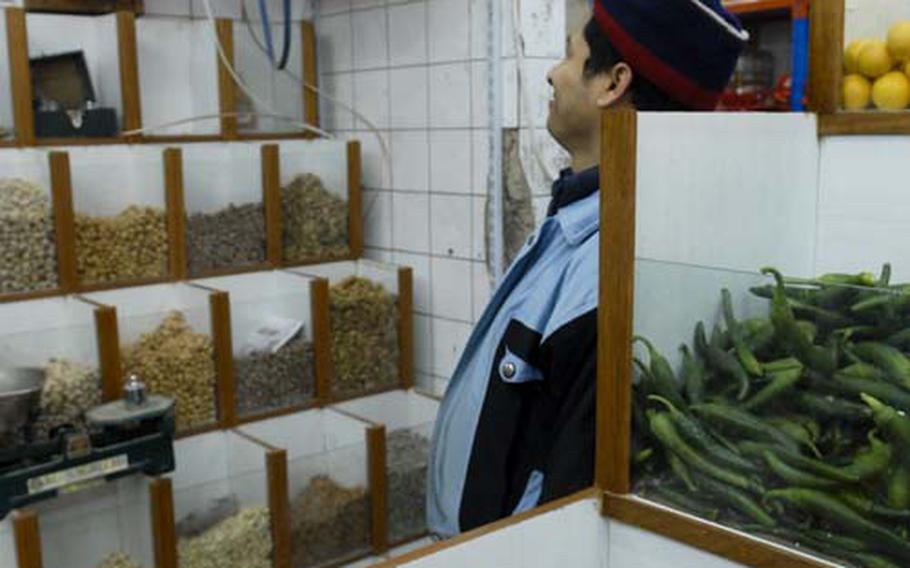 Foreign contractors are the life blood of most businesses in Baghdad&#39;s Green Zone. This shop adopted a bin system for displaying produce on the advice of a British contractor. But with foreign firms packing up, shops in the heavily fortified district have seen their business decline sharply. (Michael Gisick / S&S)

Foreign contractors are the life blood of most businesses in Baghdad&#39;s Green Zone. This shop adopted a bin system for displaying produce on the advice of a British contractor. But with foreign firms packing up, shops in the heavily fortified district have seen their business decline sharply. (Michael Gisick / S&S) Ali Huder pilots a patrol boat down the Tigris River during a training exercise near the July 14 bridge in central Baghdad. Like the streets, the stretch of river that cuts through the Green Zone is closed to all but official traffic. (Michael Gisick / S&S)

Trash and stunted weeds litter the dusty courtyards between buildings. The elevators are often out of order. Piles of small machinery &#8212; possibly related to the elevators &#8212; lie crumpled in the stairwells. Residents spend most of their time inside, watching television.

For many, the Green Zone has come to represent much about what went wrong in Iraq, both before and after the U.S. invasion in 2003. Larded with grandiose monuments to Saddam Hussein&#8217;s government, the area became the heavily barricaded headquarters of U.S. efforts to run Iraq in the years after the invasion. Neither regime was particularly known for its responsiveness to the needs of ordinary Iraqis.

U.S. troops have increasingly pulled back from most parts of Iraq &#8212; including this one. Improved security has seen much of Baghdad return to a bustling, traffic-jammed semblance of normalcy.

But even if its checkpoints have largely been turned over to Iraqi troops, the Green Zone remains very much a place apart. And as the energy of the U.S. occupation wanes, the &#8220;Emerald City&#8221; of 2004 has given way to the dingy realities of 2010.

Control of security in most of the Green Zone was handed over to the Iraqi government at the beginning of 2009 and the U.S. military has consolidated its operations onto a pair of bases near the massive new U.S. Embassy. One is built around a bombed-out Republican Guard palace. The other stretches between the monolithic former Baath Party headquarters and a blue-domed mausoleum for the party&#8217;s founder, Michel Aflaq, which has been turned into a mall selling pirated DVDs, jogging suits and miniature carpets emblazoned with the words &#8220;Operation Iraqi Freedom&#8221; to U.S. soldiers and security guards from Peru and Uganda.

&#8220;Eventually, we expect the [International Zone] to open up,&#8221; said Navy Capt. Craig Fulton, a facility manager for U.S. installations in the Green Zone. &#8220;From a security standpoint, the tighter we can get our presence, the better.&#8221;

Those changes, however, remain on the horizon, and a U.S. government-issued ID is still the easiest way to move around the Green Zone&#8217;s maze of checkpoints. Iraqi citizens are subject to stringent searches and in most cases barred from bringing vehicles inside.

That, along with the declining number of Western contractors living in the Green Zone, has left the handful of businesses in the area facing tough times.

As security improves, Western contractors have been replaced by those from the Philippines and South Asia, who work for much lower salaries.

Qassim Ghazi Mohammed, who owns a small electronics shop, offers a similar assessment, saying his business has dropped by half in the last year or so. Still, he says, there are benefits to doing business inside the Green Zone. With little competition, he can charge higher prices. And it&#8217;s quiet.

But it&#8217;s that lack of normalcy that has left many residents here yearning for a different address.

Mousawi&#8217;s daughter, Zahraa, a pharmacology student at Baghdad University, said she sometimes falls asleep in her car waiting in the hourslong lines at the checkpoints on her way home.

Mousawi&#8217;s husband, Abdalla Saleh, a Kurdish lawmaker, said he and a few friends tried to open a cafe a few years ago, but couldn&#8217;t find a good venue and ran into opposition from other lawmakers.