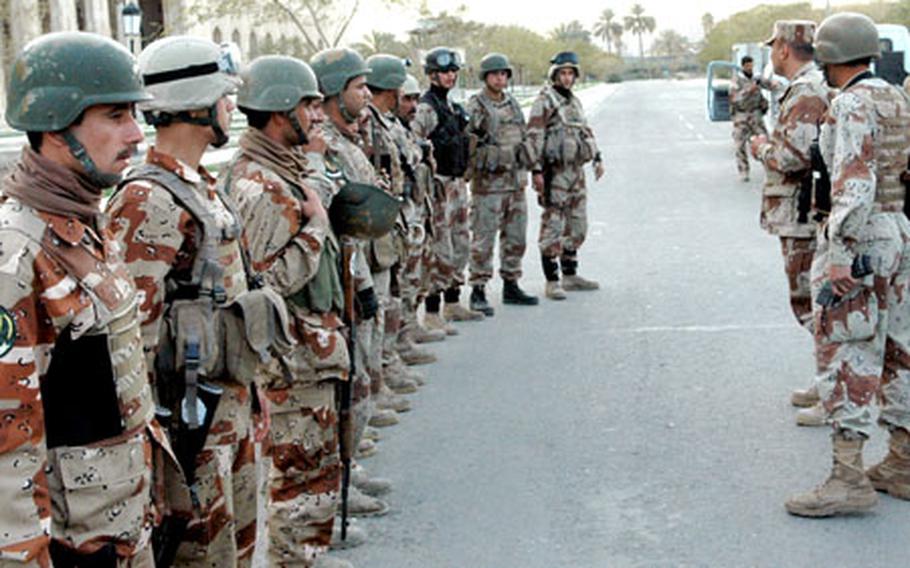 Iraqi soldiers frisk Sahad El Ani, a 30-year-old car salesman, at a temporary checkpoint in Baghdad, one of the few places in Iraq where the army operates with very little oversight from U.S. troops. (Andrew Tilghman / S&S)

BAGHDAD &#8212; It was midday in the traffic-choked city center when a team of Iraqi soldiers thought Sahad El Ani, a 30-year-old car salesman driving alone in a black Opel sedan, looked suspicious.

One Iraqi soldier waved him over to the side of the road, where several others frisked him, inspected his identification cards and searched the trunk and back seat of his car. For El Ani, the intrusion and delay was a small price for the hope of safer city.

Lawlessness and insurgent attacks persist in the capital city, but it is increasingly a problem tackled by Iraqis themselves. The cadre of Iraqi soldiers who stopped El Ani are among thousands of Iraqi troops who handle the day-to-day patrols, checkpoints and security duties in the capital.

While some Iraqi army units outside the capital remain months away from operating independently, Iraqi units in the core of Baghdad are among the country&#8217;s most developed, forging a path that many U.S. and Iraqi officials hope will lead to nationwide stability and the eventual drawdown of U.S. forces here.

Just outside the walls of the heavily fortified International Zone, the 6th Iraqi Army Division is mounting the front-line defense of some of Iraq&#8217;s most critical targets for insurgent attacks: government buildings, political party headquarters, television stations and a handful of highly revered mosques.

Deadly attacks remain a near-daily occurrence. In February, the brigade in the city center saw six car bombs explode, while three others were found and diffused. There was one assassination, one suicide bomber attack and six makeshift bomb explosions, Iraqi troops said.

Yet none of those incidents demanded help from the U.S. troops inside the International Zone who are ready to hit the ground and help the Iraqis in case of an emergency.

&#8220;It never got to the point where they couldn&#8217;t handle it themselves,&#8221; said Maj. Douglas Bunner, who heads a military transition team of about 80 U.S. soldiers who provide full-time assistance to the Iraqi army&#8217;s 5th Brigade of the 6th Division.

On many days, U.S. troops allow Iraqi soldiers to run patrols without any American oversight. They conduct foot patrols and set up temporary traffic checkpoints like the one that ensnared El Ali.

Platoon-sized operations also are increasingly common. In January, two Iraqi companies, or more than 200 troops, surrounded and searched a set of homes believed to house insurgents or their weapons. Five men were arrested and several weapons seized, U.S. troops said.

During the past several months, the 6th Iraqi Army Division in Baghdad has assumed operation control for four of its five brigades. Previously, the brigades and battalions received orders directly from U.S. commanders.

&#8220;We can do these patrols, but the coalition forces cannot leave us until we get enough power. Help from the coalition is still required,&#8221; said Col. Abbas Rihy El Azauwi, commander of an Iraqi battalion that borders the International Zone.

U.S. troops aim to limit their role to advising upper-level leaders and stepping in to influence managerial decisions.

For example, the Iraqi ministry of defense in December tried to appoint an outsider to run the 5th Brigade, but the U.S. officials stepped in and insisted the top job go to an existing officer whom they knew, liked and trusted.

&#8220;These are all new concepts for them because they didn&#8217;t think about them to this level of detail,&#8221; said Maj. Bill McClary, who heads a battalion-level military transition team.

Time frames for U.S. troop withdrawal remain hazy, but the process for carefully weaning the Iraqi army units from American support may be in sight.