In ashes of anti-drug campaign, Afghans get rehab on former US base 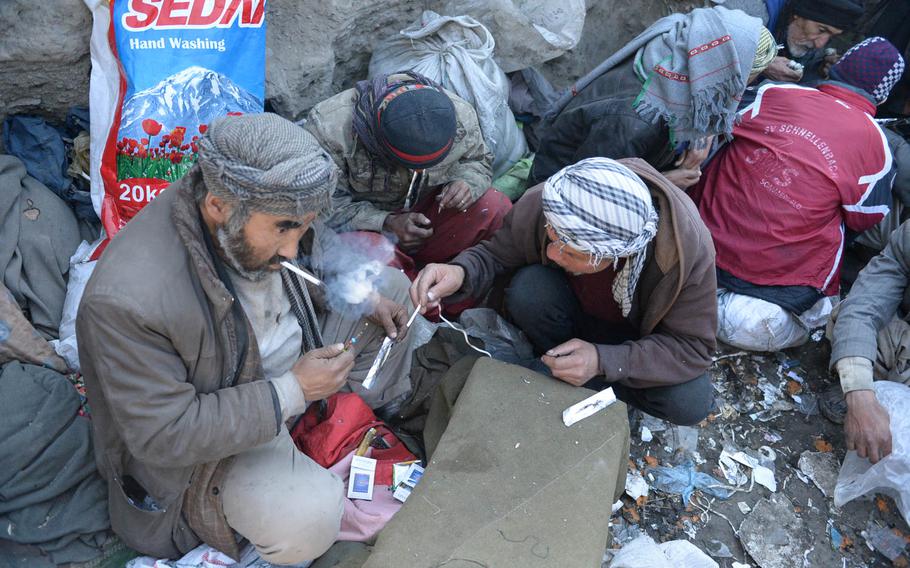 Drug users prepare opium under a bridge in Kabul on Sunday, Dec. 27, 2015, before authorities rounded up about 350 users to bring to a new rehabilitation center in a former U.S. military base. The program is part of a new effort to combat drug use after years of failed drug eradication efforts. (Heath Druzin/Stars and Stripes)

Drug users prepare opium under a bridge in Kabul on Sunday, Dec. 27, 2015, before authorities rounded up about 350 users to bring to a new rehabilitation center in a former U.S. military base. The program is part of a new effort to combat drug use after years of failed drug eradication efforts. (Heath Druzin/Stars and Stripes) 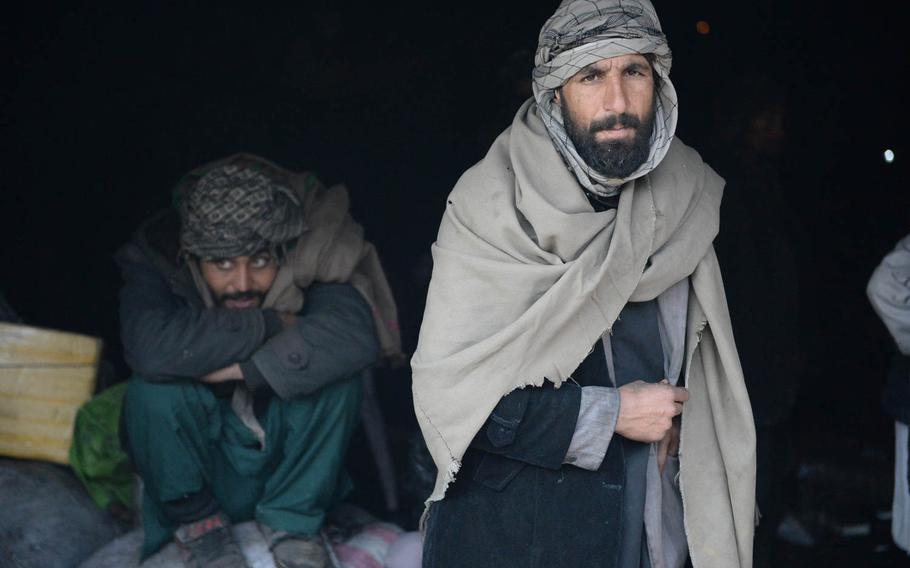 Karim Shahed, an opium addict who welcomed a government round-up in Kabul on Sunday, Dec. 27, 2015, that took him and about 350 others to a new rehabilitation center. (Heath Druzin/Stars and Stripes) Drug users scramble to get one of the limited spots to go to a drug treatment program in Kabul in late December 2015. Upwards of 10 percent of Afghans are estimated to be addicted to drugs in a country that is the world's largest producer of opium. (Heath Druzin/Stars and Stripes) A man is pushed back by police after trying to leave a colony of drug addicts under a bridge in western Kabul on Dec. 27, 2015. Authorities rounded up about 350 addicts to take them to treatment - it was billed as voluntary, though the drug users were not allowed to leave. (Heath Druzin/Stars and Stripes) A man stares out from under the Sokhta Bridge, in Kabul, Afghanistan, where a colony of drug users has lived for years. On Sunday, Dec. 27, 2015, authorities rounded up about 350 users to take them to a new treatment facility at a former U.S. military base. (Heath Druzin/Stars and Stripes) 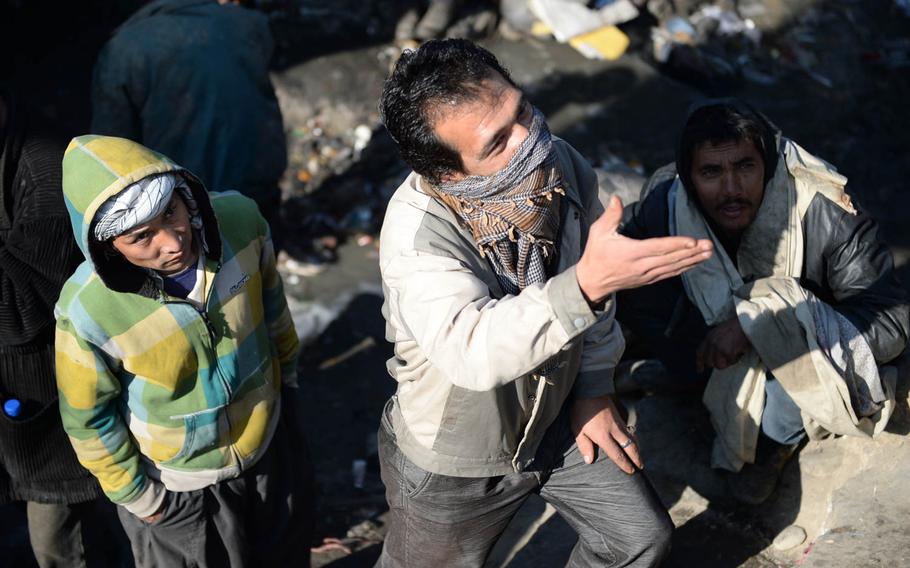 A man argues with police who had come to a colony of drug users under a bridge in Kabul, Afghanistan, to take them to a new drug treatment center. (Heath Druzin/Stars and Stripes) Drug users board buses Dec. 27, 2015, bound for a new treatment center at a former U.S. military base. An estimated 3 million Afghans are addicted to drugs. (Heath Druzin/Stars and Stripes) 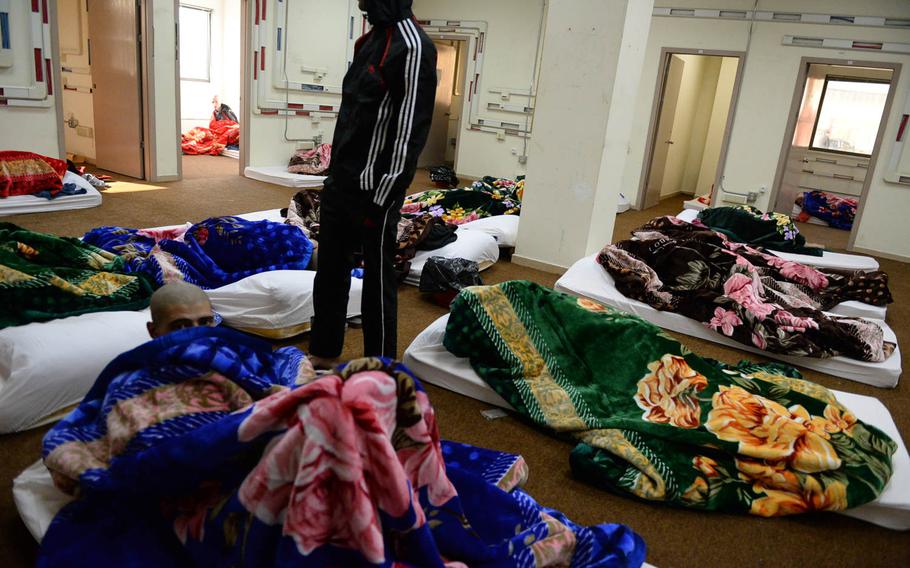 A patient peeks out from under a blanket in a recovery room for drug users in what used to be the American military base, Camp Phoenix on the outskirts of Kabul, Afghanistan, on Monday, Dec. 28, 2015. A day earlier, those in the room had been rounded up from an opium users' colony under a Kabul bridge. (Heath Druzin/Stars and Stripes) A construction worker puts together beds for what is slated to be a 1,000-bed drug treatment clinic at what used to be Camp Phoenix, an American military base on the outskirts of Kabul, Afghanistan, in late December 2015. The project is part of a new treatment initiative by the Afghan government, which has turned away from a long, troubled program of poppy eradication. (Heath Druzin/Stars and Stripes) 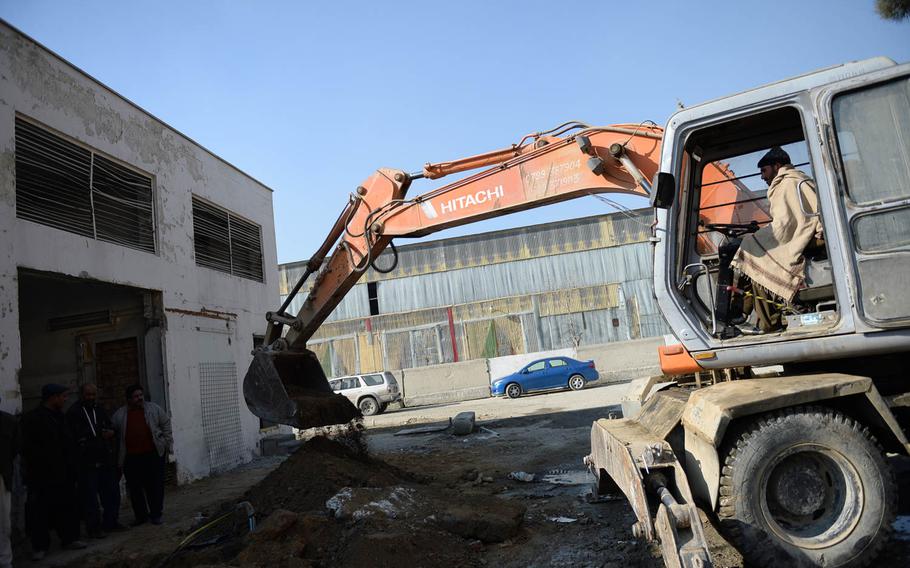 Construction workers ready a new drug treatment center on the grounds of a former U.S. military base in Kabul, Afghanistan, in late December 2015. It will be one of three new treatment centers built as part of a push to tackle the country's growing drug addiction problem. (Heath Druzin/Stars and Stripes) Afghanistan Ccounter Narcotics Minister Salamat Azimi, foreground, tours a new drug treatment facility on the grounds of a former U.S. military base in late Decemer 2015. She says the country is focusing more on treatment in a country with one of the highest rates of addiction in the world, after years of failed crop eradication efforts. (Heath Druzin/Stars and Stripes) 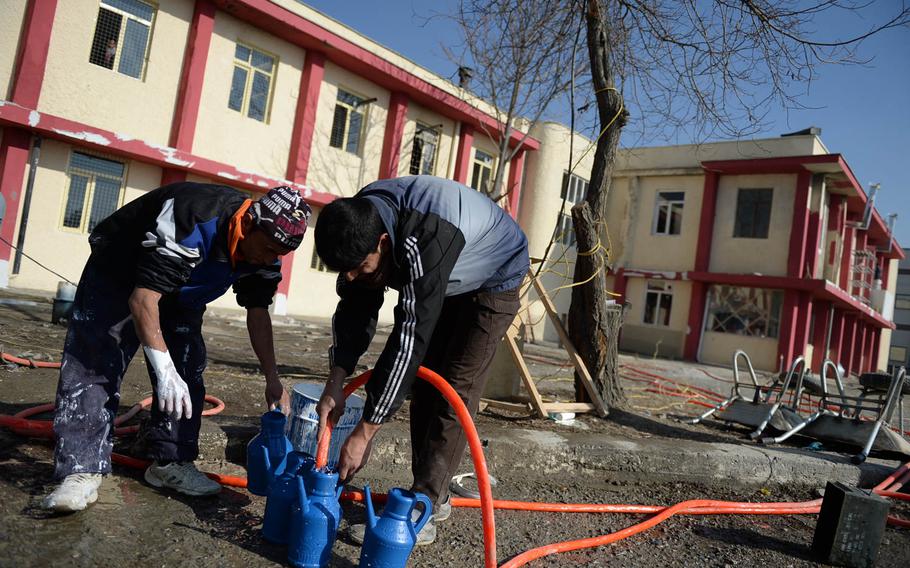 Painters work on turning what used to be a U.S. military base in Kabul, Afghanistan, into a drug treatment facility in late December 2015. The Afghan government is trying to increase treatment capacity in a country with one of the highest drug addiction rates in the world. (Heath Druzin/Stars and Stripes) 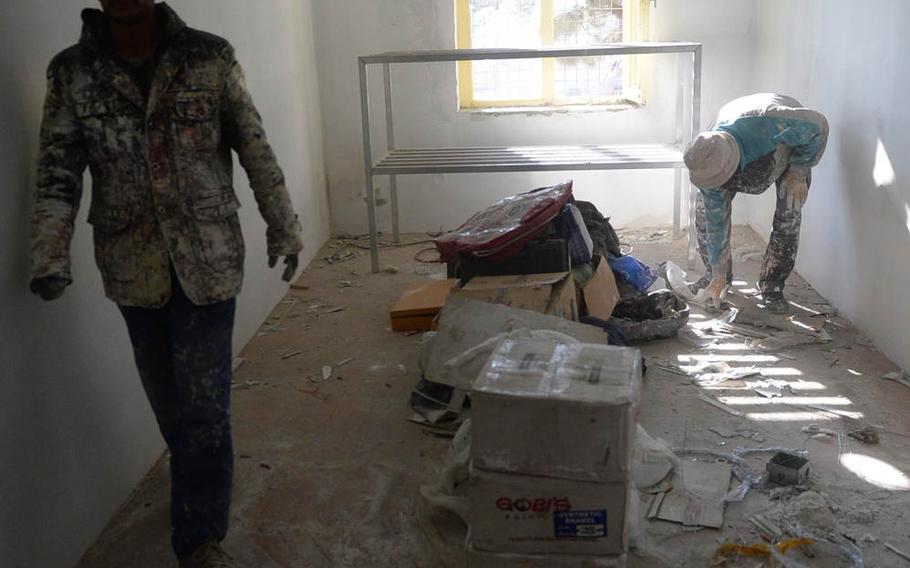 A room on the ground of what used to be Camp Phoenix, a large American military base on the edge of Kabul, Afghanistan, which in Decemer 2015 was being converted into a drug treatment center. (Heath Druzin/Stars and Stripes) Workers store wood in what used to be the heating, ventilation, and air conditioning center for the now defunct U.S. military base, Camp Phoenix, in Kabul, Afghanistan. The grounds in December 2015 were being converted house a 1,000-bed drug treatment facility. (Heath Druzin/Stars and Stripes)

KABUL, Afghanistan — During well over a decade of U.S.-led counternarcotics efforts, the colony of addicts huddling in the fetid muck openly smoking heroin under the Sokhta bridge in Kabul has only grown.

Long known as the world’s top producer and exporter of opium, Afghanistan also now ranks among the world’s most addicted nations.

Recent roundups of users under the bridge are part of a new drug treatment effort taking place on what used to be the U.S. military base, Camp Phoenix.

When police and doctors wearing surgical masks surrounded the colony under the bridge on a chilly winter morning in December, a ripple of fear went through the bridge dwellers, many of whom thought they were about to be arrested. Some tried to leave but police blocked their way.

“I came here to find my brother; he is a drug user, not me,” one man protested.

“My shop is open, I have to get to my business,” another man shouted before being pushed back under the bridge by police. “I don’t want to get well.”

During another such roundup, a drug user upset with the operation stuck Afghan Public Health Minister Ferozudin Feroz with a syringe.

The users weren’t headed to jail, though. They were put on buses bound for what used to be a large American military base on the eastern outskirts of Kabul that is being hastily turned into a drug treatment center. After the roundup, hundreds of the addicts brought in from under the bridge lay on mattresses in otherwise bare rooms, sleeping off withdrawal symptoms in a building where U.S. soldiers once coordinated operations against insurgents who were funded in part by the opium trade.

For all the billions of dollars spent on an international campaign to eradicate opium cultivation in the country, not only has the drug business boomed, but more of it is staying in the country. Afghanistan’s drug addicted population has nearly doubled in five years, to 3 million, according to the Afghan Ministry of Counter Narcotics. That means roughly 10 to 13 percent of the country is estimated to be addicted to drugs, and the country’s roughly 120 clinics can only handle a fraction of that. .

That new program coincides with the Afghan government quietly but dramatically shifting away from a more than decade-long U.S.-led program of poppy eradication that failed to curb the drug trade in a country that saw a record poppy harvest in 2014.

As the Afghan government has taken over much of the country’s day-to-day military and law enforcement operations, including counternarcotics efforts, the acres of crops authorities destroyed have fallen drastically. In 2014, as large numbers of foreign troops withdrew from Afghanistan, the number of hectares of poppy eradicated dropped by 63 percent to less than 6,700 acres, the third consecutive year it decreased, according to United Nations figures. To put that number in perspective, it coincided with a record 553,500 acres harvested.

“It’s very difficult to eradicate all of these crops,” said Zabiullah Dayem, an advisor to the Ministry of Counter Narcotics. “In Thailand and Laos, it took 30 years.”

Pirbakhsh Gardiwal, an Afghan member of parliament and a member of parliament’s Counter Narcotics and Moral Crimes Commission, pointed to Helmand province, where tens of thousands of foreign troops were once deployed to force out the Taliban, as an indication that counternarcotics strategy needs to change.

“There were thousands of British and American forces in Helmand, and Helmand was the largest poppy cultivation province,” he said. “It was a failed fight — all the strategies failed.”

At the former Camp Phoenix, after the roundup, patients were sleeping in what used to be the base’s joint operations center, where not long ago American troops and their Afghan counterparts would gather in a monitor-filled room, using sophisticated surveillance systems to keep tabs on security in the area and plan missions. Now there’s little to indicate the building’s former use, other than a small wooden sign painted with red letters: JOC.

Like many of the hundreds of former coalition military complexes and outposts turned over to the Afghan government in the past two years, much of the once-bustling base appears empty and neglected, with razor wire-topped fences collapsing and some electrical systems seemingly stripped.

Even as patients are being brought in, construction crews are busy building beds and setting up kitchens and bathrooms to eventually handle 1,500 patients, which would make it the largest center in the country, according to Ministry of Counter Narcotics officials. As part of the new addiction program, two more similarly sized treatment facilities are planned to open soon in the poppy producing provinces of Helmand and Nangarhar.

It appears the government won’t have trouble finding addicts willing to take beds: despite the initial protests, once authorities told those living under the Sokhta bridge that they were offering a treatment program, as well as hot meals and beds, there was a mad scramble to reach the waiting buses.

“I’m really happy they are taking us out,” said Karim Shahed, who said he uses heroin. “I’ve been away from my family, my three kids — if I leave this time, I won’t come back to (drugs) again.”