A U.S. servicemember talks with merchants at a travel center along Highway 1 in the Arghandab District of southern Afghanistan, with the help of interpreter to his right. Coalition forces patrol the travel center regularly as part of an effort to keep the Taliban out of the area and to win over the merchants and visitors to the facility. (Jon Rabiroff/Stars and Stripes)

A U.S. servicemember talks with merchants at a travel center along Highway 1 in the Arghandab District of southern Afghanistan, with the help of interpreter to his right. Coalition forces patrol the travel center regularly as part of an effort to keep the Taliban out of the area and to win over the merchants and visitors to the facility. (Jon Rabiroff/Stars and Stripes) A young boy sports what is presumably a hat bearing the name of U.S. President Obama at a travel center in the Arghandab district of southern Afghanistan. (Jon Rabiroff/Stars and Stripes) U.S. soldiers take positions on a roof at a travel center along Highway 1 in southern Afghanistan as other soldiers patrol the facility, making their presence known and talking to merchants and visitors. (Jon Rabiroff/Stars and Stripes) 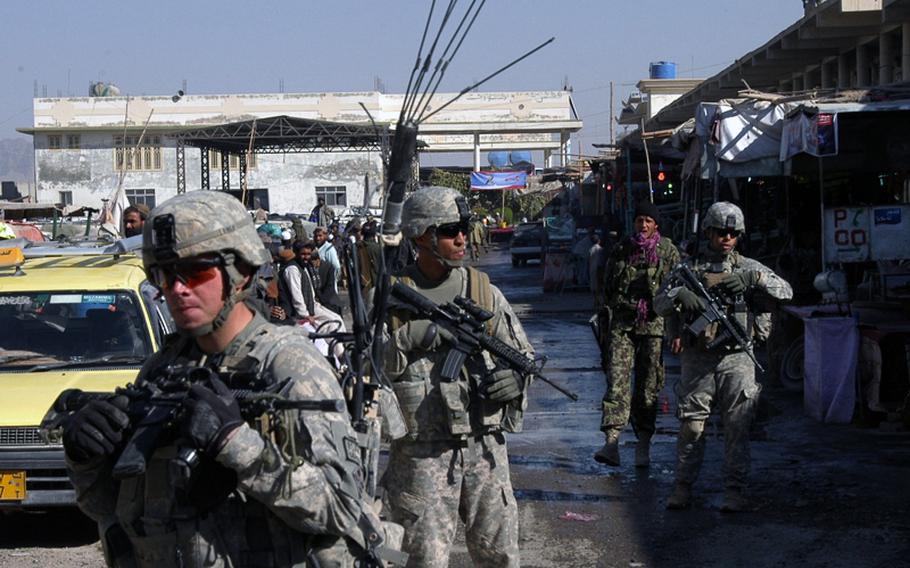 Soldiers from the U.S. and Afghan armies recently patrol a travel center in the Arghandab District of southern Afghanistan, as others take positions on the roof to the upper right. The patrols are done on a regular basis as part of the coalition forces' effort to win over the hearts and minds of the Afghan people. (Jon Rabiroff/Stars and Stripes) 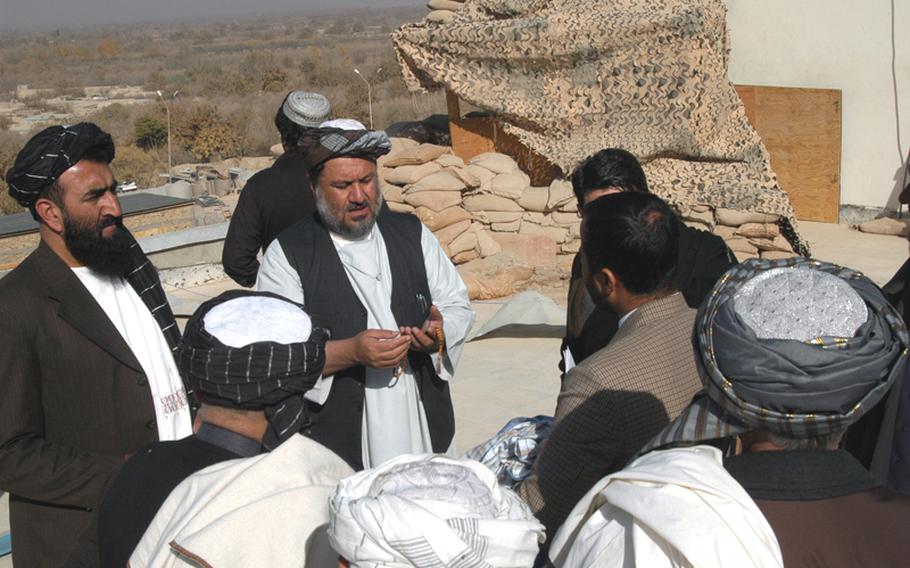 Arghandab District Governor Haji Shah Mohammad, center, talks with residents of his southern Afghanistan region recently on the roof of the district center, which is located inside the gates of a U.S. Army combat outpost. Mohammad said he knows the Taliban wants him dead for the work he does in cooperation with the U.S., but said his efforts are worth the risk because they are for the betterment of his country. (Jon Rabiroff/Stars and Stripes) 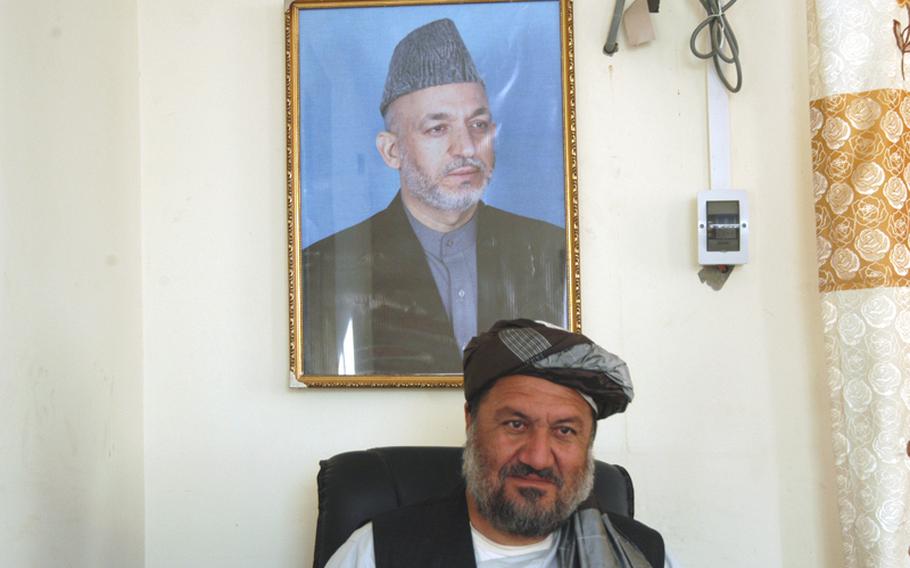 The hallways outside the Arghandab district governor&rsquo;s office routinely fill up with residents looking to him to mediate land disputes, intervene if people are being improperly detained by authorities and get schools reopened.

While making such decisions may not sound like much in a country ravaged by war, U.S. military officials say the long-term success of coalition efforts here will largely hinge on Mohammad and others like him.

The reason is that while U.S. and coalition forces continue to struggle with how to protect Afghanistan from the Taliban, it will be up to the government leaders who are left behind to ensure that Afghans don&rsquo;t ultimately fall back under the control of the insurgents.

Any questions about the importance of the district governor here were answered in June when Mohammad&rsquo;s predecessor, Haji Abdul Jabar, was assassinated near his home when a remote-controlled bomb was detonated as he drove by. Jabar&rsquo;s son and a bodyguard were also killed.

&ldquo;As a district governor becomes effective, and starts to legitimize government, obviously he becomes a very big target for [the Taliban],&rdquo; said Chris Harich, the U.S. State Department&rsquo;s representative on the Arghandab District Support Team. &ldquo;Anything that shows [the Afghan government] is having any little bit of success &hellip; is considered a threat.&rdquo;

&ldquo;My life is always in danger,&rdquo; said Mohammad, 49, speaking through a translator. &ldquo;The Taliban wants to kill me. But I&rsquo;m working with the Americans, and the Americans are working with us to improve my villages and my country.

&ldquo;I am not afraid,&rdquo; he added. &ldquo;We all have to die eventually.&rdquo;

The Arghandab river valley in southern Afghanistan is home to 82,000 people and best known for its agriculture, especially the grapes and pomegranates grown here. It is also known as the &ldquo;Gateway to Kandahar City&rdquo; because it feeds into the western approach to the city.

Arghandab district, which the valley traverses, has been one of the most hotly contested regions during the war in Afghanistan.

Starting in late July, the U.S. Army&rsquo;s 1st Battalion, 66th Armor Regiment initiated a &ldquo;series of aggressive clearing operations,&rdquo; according to commander Lt. Col. Rodger Lemons, that left six of his charges dead and 48 injured, in addition to an estimated &ldquo;10 times&rdquo; as many enemy casualties.

The effort was made especially difficult by the fact that the Taliban were not so much dug in as hidden during the summer, thanks to the rich canopy of the heavily treed region, which makes surveillance and attack from the air difficult.

Lemons said the 900 U.S. troops and 700 Afghan security forces under his direction have since been able to stabilize the area. For example, he said, the number of significant attacks or aggressive incidents by the enemy in the valley dropped from 50 per week in August to about a dozen per week by the end of September.

While attacks continue and IEDs are still being planted on a regular basis, coalition forces plan to use the winter months &mdash; when Taliban activity traditionally drops off &mdash; to do all they can to win over the hearts and minds of the average citizens here by mingling with the locals daily through foot patrols, spending $1.1 million on roads and community centers, and training Afghan security forces and government officials.

On a recent Sunday, about a dozen U.S. and Afghan soldiers left Combat Outpost Caron on what might have been called a meet-and-greet patrol around the nearby Highway 1 travel center.

Lemons said the combination bus station, taxi stand, motel and farmers&rsquo; market at the southern end of the valley is a popular &ldquo;transient area&rdquo; for Taliban heading in and out of Kandahar City.

For that reason, coalition patrols frequent the facility.

&ldquo;We make a lot of noise, because we want them to know we&rsquo;re here,&rdquo; Lemons said.

So it was that during that recent patrol, about half the soldiers took up high-profile positions on the roof while the other half walked among the travelers and merchants, striking up occasional conversations.

&ldquo;Generally we come here to get a feel for the area, and who&rsquo;s coming in and out,&rdquo; said Sgt. Humberto Espinoza, 26, of Task Force 1-66, Company C, 3rd Platoon, as he scanned the vehicles going in and out of the center&rsquo;s gas station. &ldquo;The highway is pretty important, getting from east to west, in and out of Kandahar. We try to secure the area. That way, we don&rsquo;t have people coming in and out, and trying to do bad stuff.&rdquo;

Doing most of the talking that day were Sgt. John, a human intelligence collector for the 319th Military Intelligence Battalion, and interpreter Khalid. They met with mixed results. Full names are not used for either position.

John had several friendly conversations with people around the travel center, including one with a man who, speaking English fairly well, said he and others appreciate what coalition forces are doing in the area, but that everyone is still afraid of the Taliban.

The man offered little, however, and John said he came away disappointed.

&ldquo;You don&rsquo;t run into too many people who speak English fluently, so when you do, you want to converse with them a lot,&rdquo; he said. &ldquo;So, it was a little discouraging when he didn&rsquo;t want to.&rdquo;

Meanwhile, troops here are preparing for spring&rsquo;s full-force return of the Taliban.

Lemons huddled recently with his subordinates and representatives of the ANA over maps of the southern end of the river valley to discuss various &ldquo;obstacles&rdquo; &mdash; including concertina wire and T-walls &mdash; that will be installed around the area over the next couple of months.

The idea is to block Taliban access to secluded or hard-to-track paths they have been using, and funnel them onto main roads and other thoroughfares that are being more closely monitored by coalition forces.

Company C commander Capt. Walter Reed said the key in placing the obstacles is to still allow farmers access to their fields, something that will likely be a hard sell given how the locals seem to complain about any changes coalition forces make &mdash; even those designed to make life easier for them.

Whatever coalition forces accomplish in Afghanistan, all Afghans understand that they will eventually be going home, hoping to leave behind Afghan government officials capable of leading the people and fending off the Taliban for years to come.

Lemons said the district governor does a good job of reaching across tribal lines. He also understands the importance of treating everyone&rsquo;s problems &mdash; no matter how small &mdash; as significant.

Harich said the district governor&rsquo;s job is similar to that of a state governor in the U.S., but whose responsibilities extend down to &ldquo;the county level.&rdquo;

As such, Mohammad is asked to walk a fine line. He must work with the best interests of the U.S. in mind, while making it clear to Afghan residents that he is not any sort of puppet of the coalition forces here.

&ldquo;It&rsquo;s very important for us that he remain independent, although we do provide, obviously, security &hellip; and resources to help him be successful,&rdquo; Harich said.

&ldquo;Our job is to promote him as a leader, and to give him the tools he needs to make independent decisions.&rdquo;

Mohammad said he has been encouraged by the increasing number of people from the district&rsquo;s 72 villages who are coming to him to solve their problems.

&ldquo;The people of Arghandab trust me, and that&rsquo;s good for me,&rdquo; he said.