In an instant, vibrant Tokyo was crippled 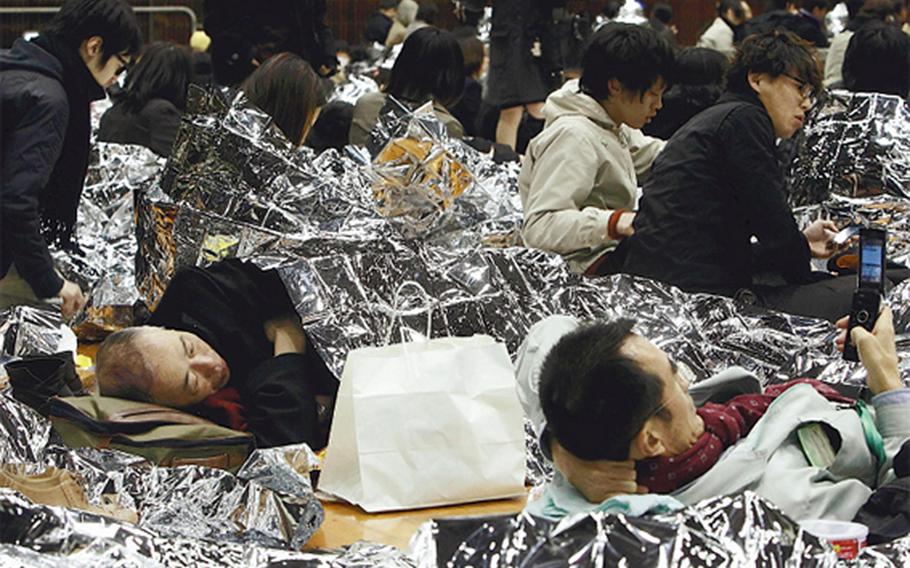 Unable to find a way home following the earthquake, people stay in a gymnasium at Aoyama Gakuin University in Shibuya Ward, Tokyo, on Friday. (Yomiuri Shimbun/MCT)

TOKYO &mdash; One of the most technologically advanced cities in the world, a leader in earthquake-proof construction, was brought to its knees in a matter of minutes.

Cars were bumper to bumper; sidewalks overflowed with pedestrians. It could have been any Friday night in Tokyo.

The 8.9-magnitude quake, the nation&rsquo;s worst in recorded history, drove residents accustomed to swaying offices into a blind panic. They poured into the streets, seeking refuge they could not find.

Trains were stopped, with riders forces to get out and walk on narrow paths of elevated track. It&rsquo;s a city that survives on mass transit. Gone.

The energy and excitement usually seen on the faces of the crowd heading to the next bar or restaurant had been replaced with despair and hunger. Downtown Tokyo was surreal.

People were crowding into every convenience store, looking for something, anything to get them through the night. And even though the shelves were bare, they kept looking.

It was only 8 p.m., but restaurants were turning people away because they had run out of food.

Many of the cars in the roadway were parked as their occupants got out to stretch, use the bathroom, or grab some food.

People were in a hurry, but had no place to go.

A group of Stars and Stripes staffers &mdash; the two of us included &mdash; were stuck in a van in the mile-long Shinjuku tunnel, which didn&rsquo;t seem like the safest place to be if the earth started shaking again. Other than a walk into Shinjuku to find food, we were in that tunnel for nearly three hours.

In Shinjuku, typically one of the busiest of Tokyo&rsquo;s neighborhoods, people looked dazed.

Although trains were down, the stations provided a shelter for many. Groups sat together, talking and eating. Many enjoyed a beer. Some slept. The station left the gates open so folks could use the restrooms. It was a calming atmosphere, and much more inviting than the biting wind and chill above ground.

Sirens could be heard throughout the night, but they didn&rsquo;t have the effect on folks as the earlier ones did after the initial quake in the afternoon.

Despite the hundreds of tons of concrete overhead, people were being patient inside the Shinjuku tunnel. Drivers weren&rsquo;t honking their horns. People weren&rsquo;t yelling. There was a calm in the air, a knowing that it was going to be a long night.

Above ground, people repeatedly stared at their cell phones, almost praying for reception. Pay phones were still working, and people were lined 10 deep to make a call. Later we would learn that the government provided free calls on those phones.

Imagine, one of the world&rsquo;s most technologically advanced countries reduced to LAN lines.

One young woman helplessly studied a map near the entrance to Shinjuku station. The trains and subways shut down for most of the day, leaving people with no way to get home. Tokyo is a sprawling city, and not the kind of city you want to navigate on foot.

But people had no choice. Postings found Saturday on social media sites gave an indication that people spent up to 8 hours trying to walk home. Some never made it, with the Tokyo government estimating that some 94,000 were unable to go home Friday night. More than 1,030 public and private facilities opened their doors to accommodate them.

Inside our van, our phones all started to buzz at the same time.

&ldquo;What is that?&rdquo; someone asked.

It was five hours late.