In American hands, Lebanon evacuees 'know we are safe now' Cpl. Justin Muir, from the 24th Marine Expeditionary Unit Service Support Group, stands with crowds of American citizens waiting to be evacuated from Beirut near the U.S. Embassy on Friday. (Ben Murray / S&S)

Cpl. Justin Muir, from the 24th Marine Expeditionary Unit Service Support Group, stands with crowds of American citizens waiting to be evacuated from Beirut near the U.S. Embassy on Friday. (Ben Murray / S&S) A landing craft loaded with evacuees pulls away from the beach in Beirut on Friday on its way to deliver U.S. citizens to the USS Trenton, which evacuated them to Cyprus. (Ben Murray / S&S) Lebanese servicemembers carry an American citizen onto a landing craft at a beachhead in Beirut on Friday. (Ben Murray / S&S) 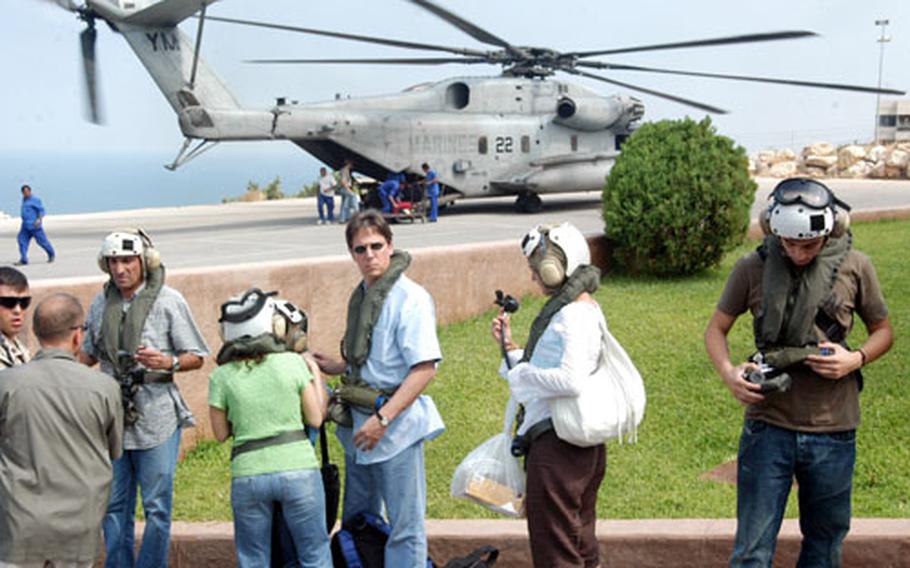 U.S. citizens waiting to be evacuated to Cyprus from the U.S. Embassy in Beirut inspect the safety gear given to them by Marines standing by to fly them out by helicopter on Friday. (Ben Murray / S&S)

BEIRUT, Lebanon &#8212; From the deck of the USS Trenton in the Mediterranean Sea about a mile off the coast of Beirut, Mahmoud Taleb looked back on his journey with near disbelief.

He had been visiting his parents in a Lebanese village close to the Israeli border with his wife and three kids when fighting erupted last week, about halfway into the family&#8217;s monthlong trip to Lebanon.

Taleb, a Ford Motor Co. employee who lives in Michigan, immediately began moving his family out of the village, and made it just in time &#8212; a day after they left, the town was hit hard by Israeli bombs, destroying many of the buildings, he said.

Then things got worse.

Arriving in the Lebanese capital, he went to a relative&#8217;s house located about a half-mile from the Beirut airport, where he watched, heard and felt more Israeli bombs fall closer than ever, he said.

The near-miss has been part of an odyssey that continued to grip the family Friday when they boarded the Trenton from a beach in Beirut, where amphibious landing crafts hauled thousands of U.S. citizens to American ships waiting offshore.

It&#8217;s an experience that continued to be uncomfortable, agitating and uncertain on the overcrowded vessel, but Taleb said he felt like many at that stage of the evacuation &#8212; relieved to be out of the country and in the hands of the American military and U.S. State Department, no matter what the conditions.

The story has been similar for many evacuees on the ships and helicopters that ferried U.S. citizens out of Beirut on a near-constant basis as the week came to a close.

By Friday, most had been through days of frustrating attempts to get information from the U.S. Embassy on how to get out of the embattled country, often waiting in vain for promised phone calls and searching fruitlessly for clues from the Web site.

Many resorted to simply showing up at the gates to the evacuation site, and formed huge lines of families that plodded slowly forward in the heat of the day.

&#8220;It was like a mosh pit for like three hours,&#8221; Kelli Youngson, 22, said of the crush to get into the beach area where U.S. Marines waited to check people onto the landing craft.

People were jammed together, families with luggage pressed up against one another, all trying to get into the cordoned-off beachhead, she said.

With those kinds of experiences behind them, many evacuees said they felt great gratitude for members of the U.S. military who were trying to get them back home.

The sentiment can get tested, however, because the escape route out of Lebanon is long and hot and sweaty and smelly.

It starts with the logjam at the beachhead or a wait for a helicopter flight from the grounds of the embassy. From there, most people go to a U.S. Navy ship or chartered cruise liner, where they are packed in cramped conditions for a 10- to 12-hour ride to Cyprus.

After standing in lines to process through the disembarkation point, most are herded onto buses and taken either to hotels or to the Cyprus International Fairgrounds an hour away from the coast, where a temporary shelter has been set up.

There, the evacuees continue to wait, in some cases for a day or longer, to be bused to the airport for a chartered flight home. All along the way, people are standing in lines, hauling luggage and calming their children, waiting with drooped shoulders and tired eyes, sweating in the Mediterranean heat.

It&#8217;s a tedious process, but one servicemembers along the route said they have been proud to take part in with the evacuees.

Marine medics looking after civilians, Navy enlistees hauling luggage and carrying children to the landing craft, Air Force pilots shuttling people from the embassy to Cyprus &#8212; all said the evacuation effort has been one of the most gratifying actions of their military careers.

Aboard the Trenton, which had steamed to the area from an exercise in the Indian Ocean to help with the effort, Navy sailors gave up everything they had in the way of comfort items to help the masses of evacuees.

Crowds had taken over the mess hall and most available spaces people could sit or lie down on the ship. Sailors had given up their bunks for the tired evacuees. Many sailors had not slept for 24 hours by the time the ship was under way, and many would likely not sleep until the ship pulled into port in another 12 hours, sailors said.

They wouldn&#8217;t rest, said one, until everybody was off the ship &#8212; when they would likely turn around and go out for more.

By Saturday, 3,994 Americans had been evacuated in the past 24 hours, bringing the total number of Americans evacuated up to 7,731, said a Pentagon official.

The USS Whidbey Island was expected to leave Lebanon Saturday with about 600 more U.S. citizens, the official said.

Also Saturday, the military was expected to begin flying U.S. citizens from Cyrpus to Germany, the official said.