In age of transformation, Chievres planning to endure 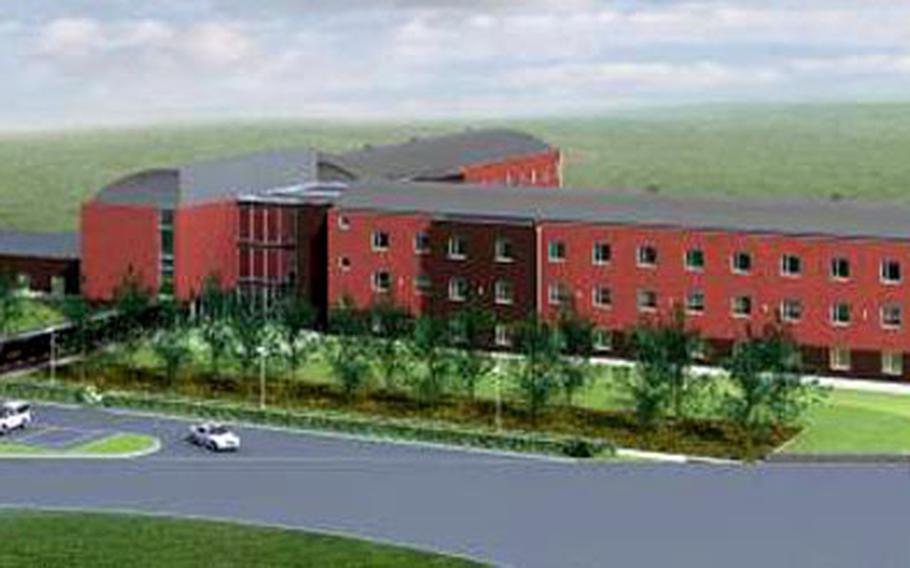 This artist’s rendering shows what the new $14 million, 96-room Army lodge will look like once it is complete at Chievres Air Base, Belgium. The new lodge, expected to open this summer, is one of many building projects taking place within the Benelux region. (Courtesy of U.S. Army)

CHIEVRES, Belgium &#8212; They are referred to as &#8220;enduring communities,&#8221; those military installations in Europe that will remain once transformation runs its course.

While much of the focus has been on Germany, and understandably so, given all the bases and personnel, one engaging locale that often gets overlooked but isn&#8217;t going under is the U.S. military community in Chievres.

Headquartered on Daumerie Caserne, the U.S. Army Garrison Benelux primarily exists to support U.S. forces assigned to NATO. Across the road is Chievres Air Base, which has a shopping area, offices and a runway used by the commander of Supreme Headquarters Allied Powers Europe, or SHAPE.

Along with his staff, Army Col. Dean Nowowiejski, the local commander, makes no secret of the fact that USAG Benelux, which supports facilities in Belgium, the Netherlands and Luxembourg, is sticking around. Based on recent projects and future construction plans, no one is talking closure, at least not around Chievres.

The list Mackson is referring to concerns military construction funds for installations, a fairly reliable indicator of future intentions. Grafenw&#246;hr, Germany, and Vicenza, Italy, are both experiencing a construction boom as part of the transformation.

For its size, Chievres stands to benefit, too.

Last year, a new $9.5 million dormitory opened on base, and the chapel on Daumerie Caserne moved into a renovated building. In February, the Army opened a new access gate on base, a $1.5 million project that&#8217;s part of a $4 million effort to upgrade and fortify access points at both installations.

This year, Mackson and his staff are involved in two large-scale projects: a $15 million hotel that will be completed in late 2007; and a $12 million commissary due to open in fiscal 2008. Other projects are in the works, from a $7 million child development center at Brunssum, Netherlands, to a $500,000 car wash on the commercial side of Chievres Air Base.

Designs of the new lodging facility call for 96 hotel rooms, including family suites with kitchenettes. There will be a lounge and breakfast area, a baggage storage area and a laundry room for each of the three floors.

The proposed commissary would be about 50 percent larger than the current facility and would include a bigger produce and deli section.

Also on tap is a runway renovation project that is expected to shut down the strip for about 12 months, said Air Force Lt. Col. Pete Giusti, commander of the 309th Airlift Squadron at Chievres. The 8,165-foot runway, used primarily by NATO, averages a few flights a day.