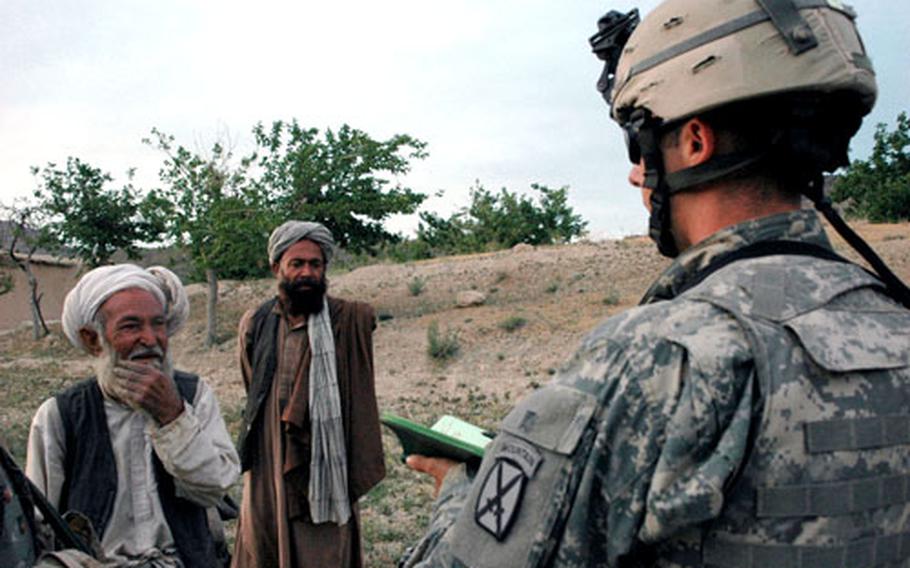 First Lt. James Taddia, a fire support officer for Company A, questions Haji Abdul Rahman, left, a villager who said he was 85 years old. The man and other farmers told the Americans that they don’t pay attention to the outside world. “I just do my planting and field work,” he said. (Anita Powell / S&S)

First Lt. James Taddia, a fire support officer for Company A, questions Haji Abdul Rahman, left, a villager who said he was 85 years old. The man and other farmers told the Americans that they don’t pay attention to the outside world. “I just do my planting and field work,” he said. (Anita Powell / S&S) 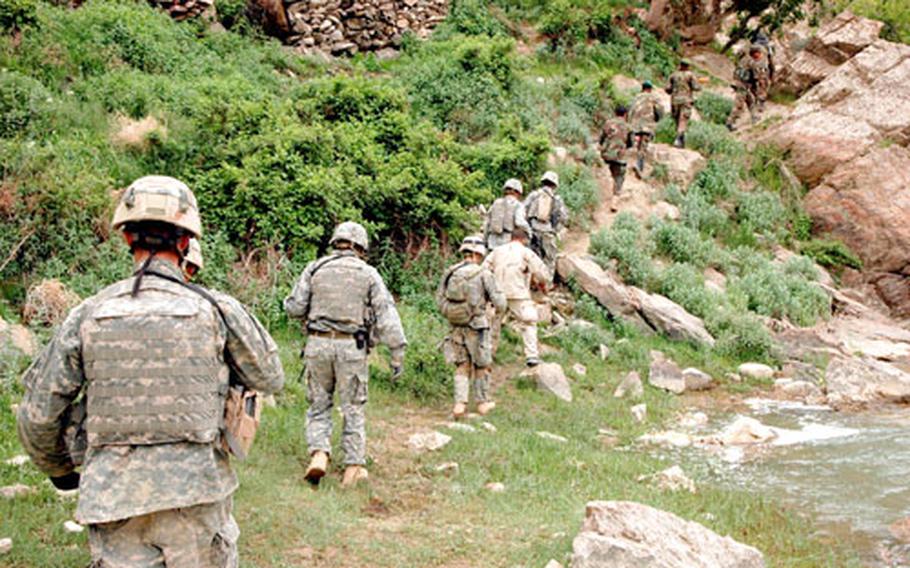 Company A soldiers, led by Afghan National Army soldiers, make their way along the banks of a river after a cordon-and-search in a village, in which they detained four men suspected of having links to the Taliban. (Anita Powell / S&S)

ZABUL PROVINCE, Afghanistan &#8212; Five years after the initial American push into Afghanistan, Zabul province remains a critical area for Taliban activity and infiltration from neighboring Pakistan. But many infantry missions in the mountainous area revolve less around firefights than around patient questioning and delicate detective work.

That was amply illustrated during a recent mission into the lush Arghandav River Valley, where the platoon spent two days working with Afghan National Army soldiers through a succession of tiny villages, looking for Taliban fighters and detaining four men suspected of having links to the Taliban.

The platoon triumphed over another merciless adversary: the demanding terrain and a harrowing five-hour drive over 7,000-foot mountains inlaid with paths no wider than a pickup truck.

Once inside the valley, company commander Capt. Christopher Wilkinson led a dusk foot patrol through several villages, in an attempt to gauge villagers&#8217; sentiments, assess their trustworthiness and to find Taliban fighters.

Several elderly villagers said they haven&#8217;t seen Taliban fighters for at least a year. The men, who were mostly farmers, also said they didn&#8217;t pay much attention to the outside world.

Others were similarly reticent.

&#8220;Ask him where the Taliban are,&#8221; Wilkinson pressed his translator to ask a villager who said his name was Rahimullah.

Soldiers expressed frustration at their inability to take action against men who appeared to be clearly out of place among the villagers.

On the mission&#8217;s second day, a young man with mussed-up hair and a dirty blue prayer cap sidled up to an Afghan National Army lieutenant and whispered in his ear.

Wilkinson quickly summoned a group of soldiers and sent them to a village by the riverbank, where the soldiers gathered 16 men, questioned several and searched their homes.

In the end, four men were detained and taken to Forward Operating Base Lagman for interrogation by American officials. All four men, said 1st Lt. Jesse Harden, assistant intelligence officer for the battalion, had been linked to the Taliban.

After questioning, Harden said, detainees are generally transported to an American detention facility at Bagram Airfield, turned over to Afghan authorities or released.

Harden said such missions were helping to further the battalion&#8217;s goal of reducing Taliban influence in the area.