In Afghanistan, snow in desert brings operations to halt 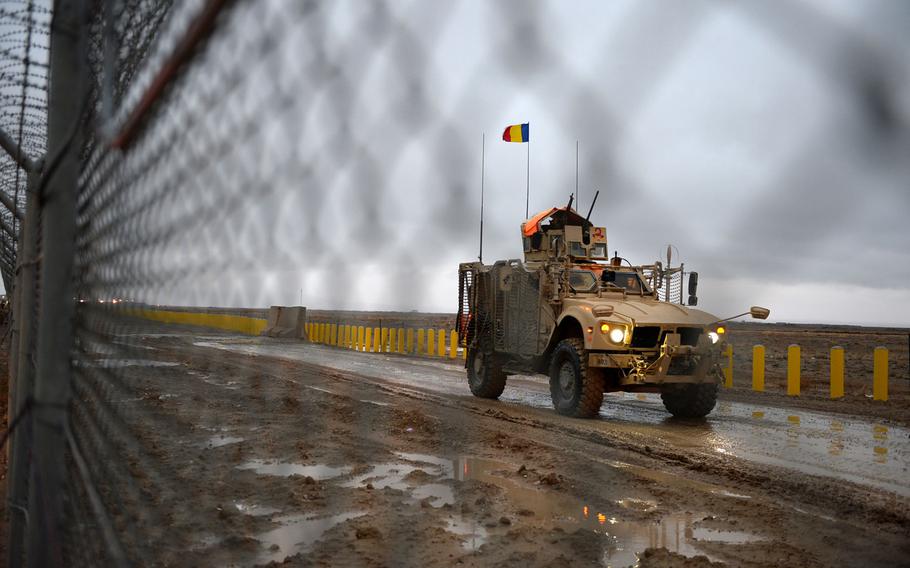 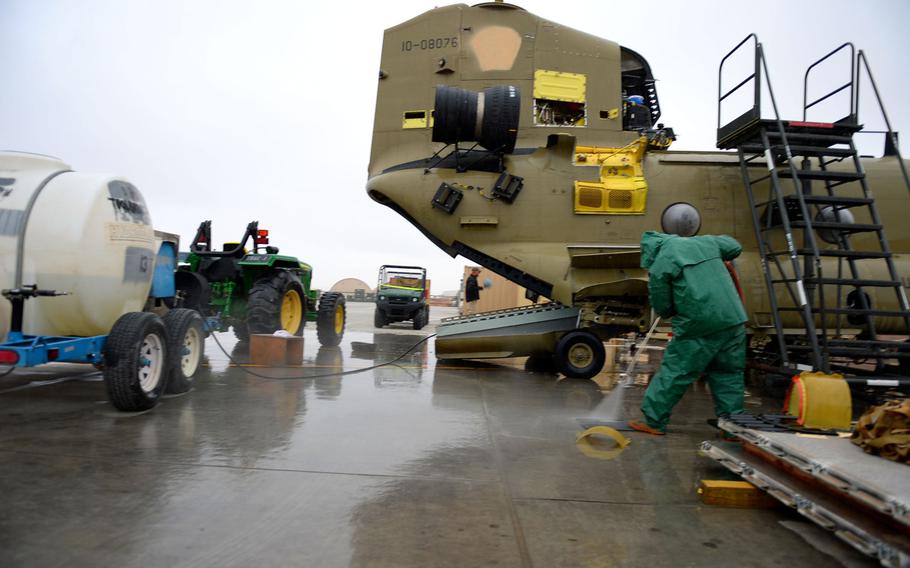 Hilario Veltran, a DynCorp employee, hoses down airplane parts under a light sprinkle of snow. When weather shut down most flight operations at Kandahar Air Field for a week in early February, it left time for crews to catch up on maintenance. (Cid Standifer/Stars and Stripes) 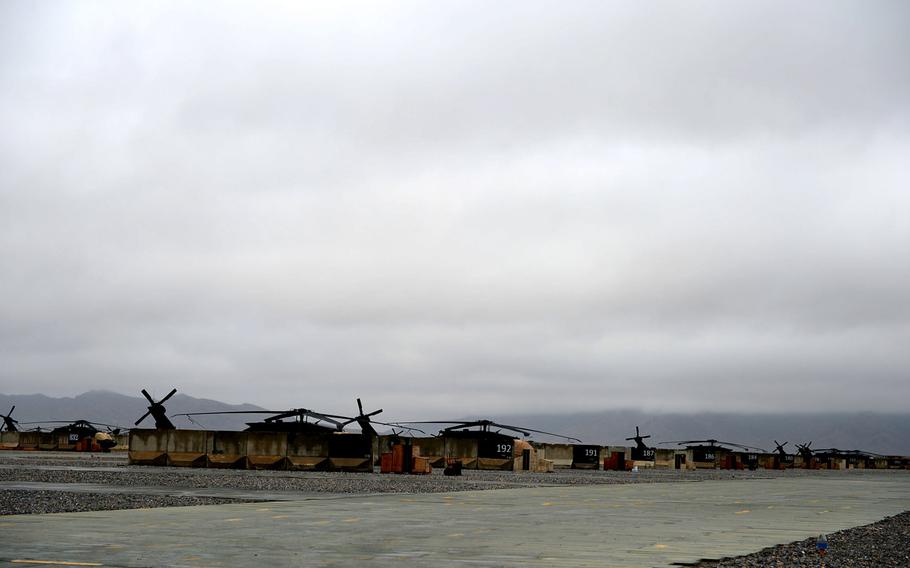 Rows of helicopters at Kandahar Air Field, Afghanistan, were grounded by low-hanging clouds and generally poor weather for a week in early February. Snow is a rare thing in the desert around Kandahar, where temperatures can climb upward of 130 degrees Fahrenheit in the summer. (Cid Standifer/Stars and Stripes) 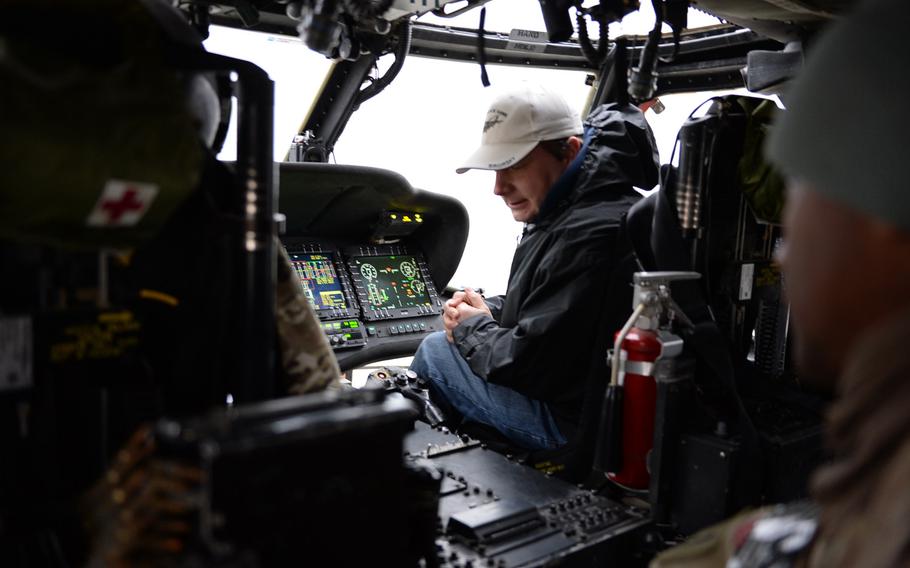 Chip Charette, a Sikorsky employee, assists a Task Force Demon flight team with maintenance and testing on a frigid day in early February. When snow and generally gruesome weather shut down most flight operations for a week, flight teams used the time to catch up on maintenance and administrative tasks. (Cid Standifer/Stars and Stripes) 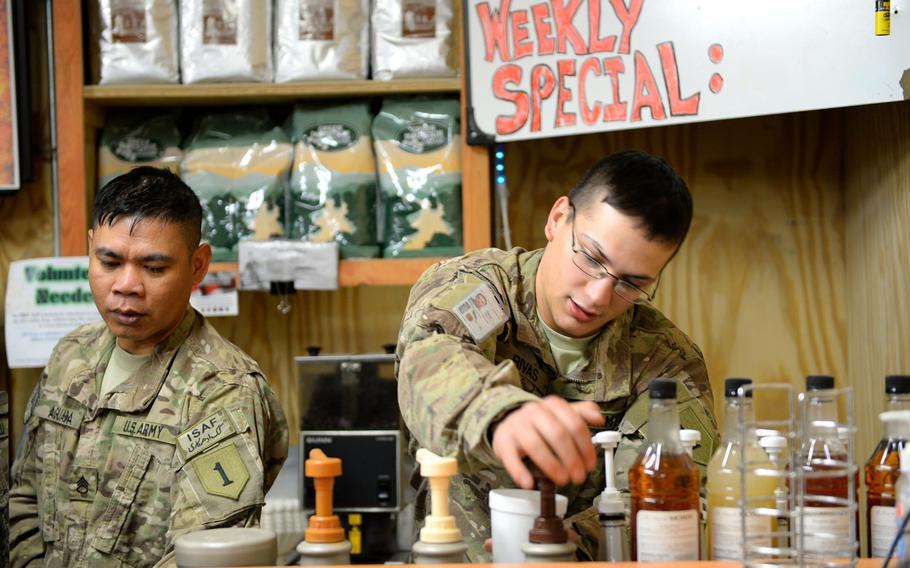 Staff Sgt. Arnelle Aguada, left, and Spc. Andrew Rivas make coffee for soldiers coming in from the cold at The First Cup, a volunteer coffee bar next to the flight line at Kandahar Air Field, Afghanistan. Asked his opinion of the weather, Rivas asked, "Is that a joke?" (Cid Standifer/Stars and Stripes) 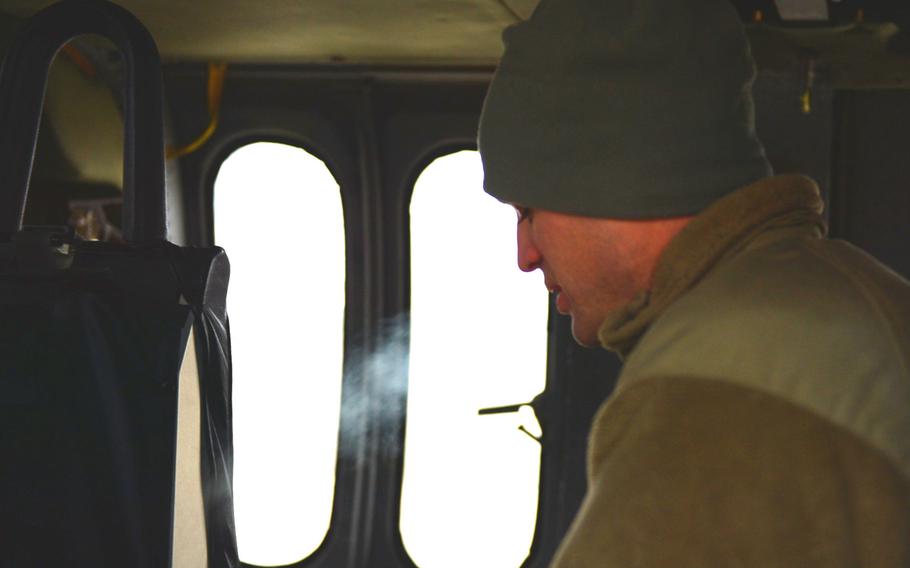 Spc. Morgan Frisk's breath freezes while he runs maintenance tests on his flight team's Blackhawk. Snow, rain, and low cloud cover kept most helicopters grounded for about a week at Kandahar Air Field, in a desert where temperatures climb above 130 Farenheit in the summer. (Cid Standifer/Stars and Stripes) 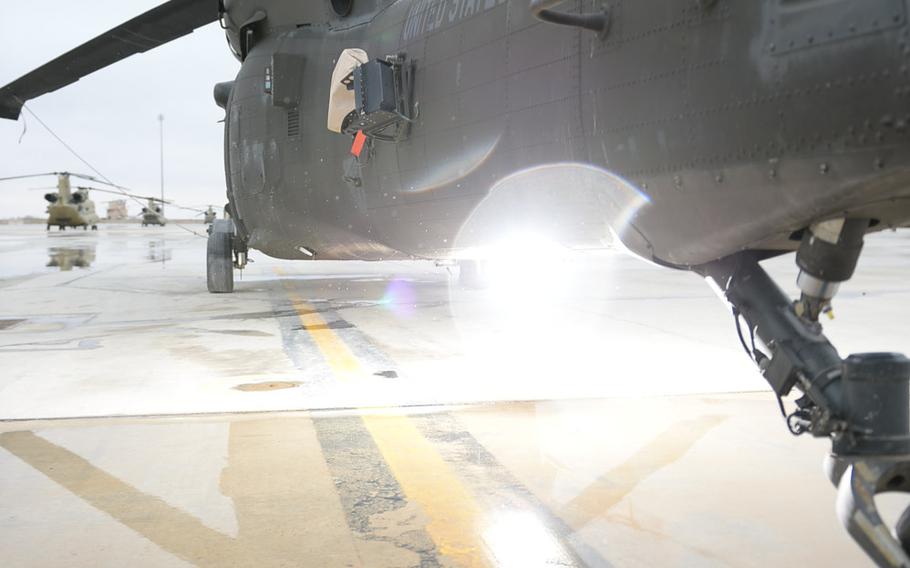 A Black Hawk flashes its lights during maintenance and testing while parked on the tarmac at Kandahar Air Field, Afghanistan, in this undated file photo. (Cid Standifer/Stars and Stripes)

KANDAHAR AIR FIELD, Afghanistan — A few months ago, daily temperatures spiked at 130 Fahrenheit here. But recently, soldiers slogged through freezing mud and slipped over ice on the boardwalk, while dark, low-hanging clouds made all hours of the day look like dusk.

Snow is exceedingly rare in this southern desert. For a week at the beginning of February, a handful of flurries brought operations here screeching to a halt. All the military’s high-end technology was rendered useless.

1st Lt. Russell Mixon, a Black Hawk pilot, said his crew had been grounded for a week — the first time weather had so severely clipped his wings in six months at Kandahar Air Field. At a coffee shack near the flight line, when asked how the weather was treating him, Spc. Andrew Rivas gave a hard stare and said, “Is that a joke?”

Master Sgt. Steve Fisher, one of the Air Force’s battlefield weather forecasters at Kandahar, has found himself once again the bearer of bad news.

“Weather is changing constantly, and weather is doing exactly what weather does,” he said. “So as we tell people, ‘We’re in sales, not production.’”

Fisher and fellow forecaster Staff Sgt. Rachelle Moran say their forecasts are part science and part art. They look at the copious data available, mesh together their favorite meteorological models, make their best educated guess, and watch to see if they were right.

And saying whether or not skies will be cloudy isn’t good enough. If they predict a cloud ceiling of 2,000 feet and end up with a cloud ceiling of 5,000 feet, they call their forecast “100 percent wrong,” because it means they gave commanders bad information about which operations would be possible.

Black Hawk pilot Maj. Darin Gaub with Task Force Demon knows firsthand what kinds of messes pilots can get into if the weather changes unexpectedly. He recalled trying to get home from a mission in eastern Afghanistan in 2006 that forced him to hop from ridge to ridge all over the region, looking for valleys clear enough to meander down, after the cloud cover settled on the tops of the mountains.

Snow and ice can easily take down a Black Hawk. Gaub said 150 pounds of ice can build up on the copter’s blades, and it takes only a few ounces to throw it out of balance. The blades can be heated electrically to melt ice away, but snow often comes with low visibility, a problem in itself.

Chinook pilot Maj. Eric Edward Artemis, who has similar tales of bad weather in the mountains, said nothing in training can completely prepare helicopter pilots for the Hindu Kush.

“There’s nowhere in Korea that’s anything like here. Iraq was a lot simpler,” he said. In Afghanistan, he added, “the weather is deadlier than the enemy.”

So instead of risking the Kandahar snows, Artemis and Gaub were grounded that week, sorting out which delayed missions would take priority once the clouds lifted and catching up on helicopter maintenance.

Mixon said his crew was similarly spending the ground time on maintenance and administrative tasks.

“It’s actually been a nice chance for us to catch our breath,” he said. “With the group of guys we’ve got out here, it’s hard to get bored.”

And after they cleaned the snow from the bird, he added, there was enough handy for a snowball fight.