In Afghanistan, paving the path to progress 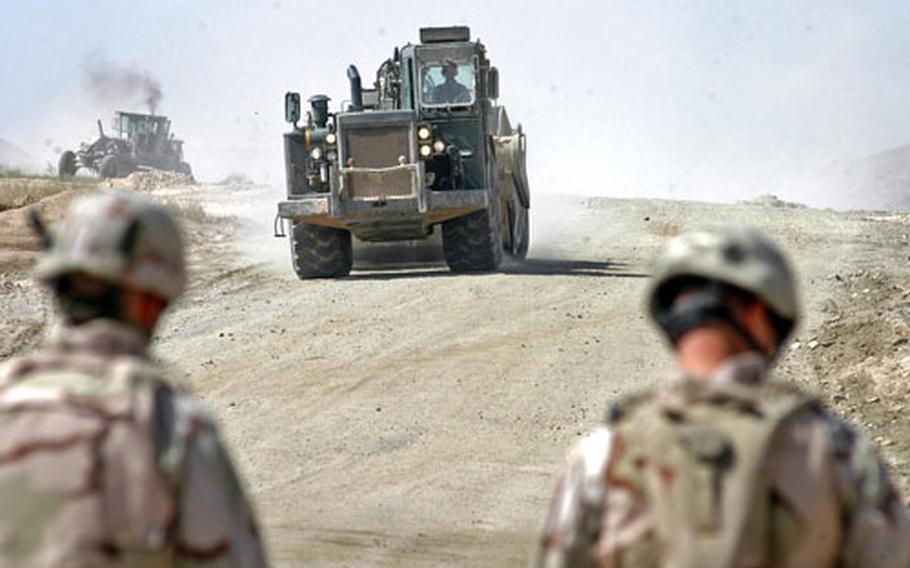 Soldiers from Task Force Pacemaker walk down the shoulder of the Kandahar-to-Tirin Kot road as construction equipment operates in the background. Since April, about 1,000 U.S. soldiers from the task force have been working on the last 48 miles of the 76-mile road. The road has been under construction since June 2004. (Jason Chudy / S&S)

Soldiers from Task Force Pacemaker walk down the shoulder of the Kandahar-to-Tirin Kot road as construction equipment operates in the background. Since April, about 1,000 U.S. soldiers from the task force have been working on the last 48 miles of the 76-mile road. The road has been under construction since June 2004. (Jason Chudy / S&S) 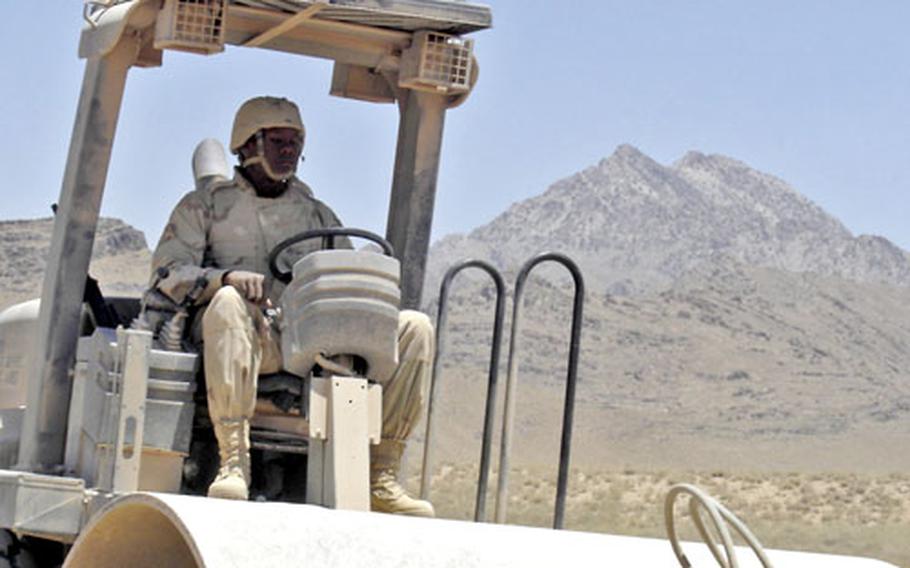 Pvt. Joshua Robinson rolls out a section of road near Forward Operating Base Pacemaker in Afghanistan. (Laura Walker / U.S Army) 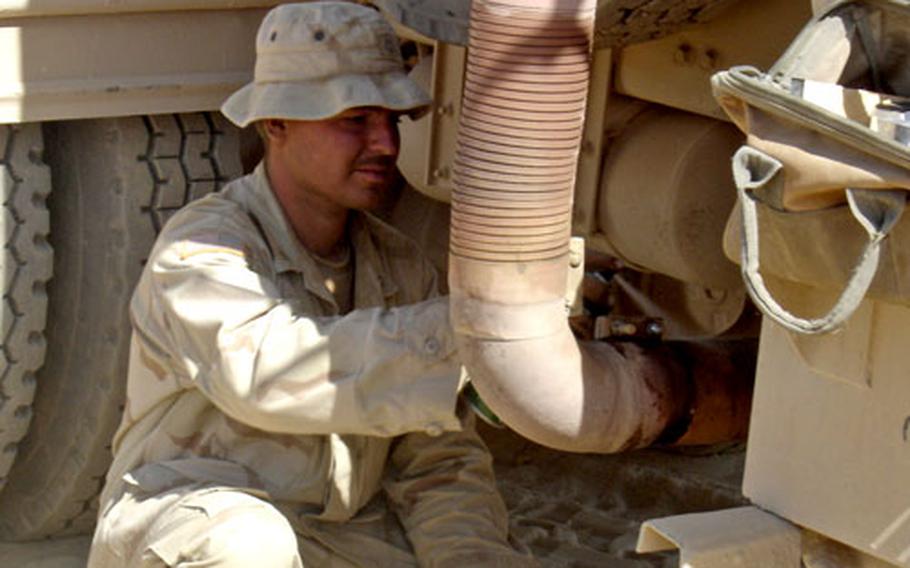 KANDAHAR, Afghanistan &#8212; If the fight to defeat the Taliban can be measured in distances, one of the ongoing battles is 76 miles long. And it&#8217;s combat engineers, not infantrymen, who are carrying the fight to build a road between Kandahar and Tirin Kot (Map).

Nearly 1,000 active-duty, reserve and National Guard soldiers from the Kandahar-based Task Force Pacemaker have been working since April to finish the final 48-mile stretch of road.

Millions of man-hours and $22 million &#8212; much of it from the U.S. Agency for International Development &#8212; have been pumped into the project, which should be finished within the next month. A company contracted by USAID is following behind the soldiers and will lay a longer-lasting top coating on the road by the end of October.

In the meantime, the task force&#8217;s two construction crews, which includes units from Alaska, Hawaii and North Carolina, are pushing the northern and southern sections closer by about 700 meters a day. The crews are expected to meet Wednesday just north of the small village of Kekhay.

But this project isn&#8217;t just about building a road.

While construction crews were putting down a coating of crushed rock on the road Saturday near Elbak, a handful of other soldiers were examining villagers during a medical civil affairs project.

The road project, according to task force commander Lt. Col. Paul Paolozzi, involves a variety of missions that aren&#8217;t typical for an engineer unit.

The road is being built through an area where Taliban forces have operated with relative ease in the past. Consequently, the project&#8217;s progress isn&#8217;t only measured in miles, but also by attacks on his troops.

Driving down the road, Paolozzi pointed out a handful of locations where task force units have been hit by roadside bombs or ambushed by fighters. None of the unit&#8217;s soldiers has been killed, he said, but a handful have been injured.

Afghan National Army troops, along with a platoon from the 82nd Airborne Division, are attached to the task force to provide protection, but most of the on-site security is done by the engineers themselves.

In this area, the road runs through a narrow valley within rifle or rocket-propelled grenade distance from the surrounding hills.

Taliban fighters have placed mines and other roadside bombs along the route, and clearance crews precede construction teams out to the work site each day.

Area village elders, Paolozzi said, have told him that they hope the road will provide them not economic prosperity, but something relatively basic.

If the road allows them to meet these simple needs, Paolozzi said, the Taliban&#8217;s grip on the region can be broken.

Progress measured in tenths of a mile

Soldiers from the 528th Engineer Battalion began construction on the 76-mile road between Kandahar and Tirin Kot on June 1, 2004.

The 528th completed 28 miles of road before turning over construction to Task Force Pacemaker in April 2005.

Since then, the task force has worked daily, with the exception of a one-day safety stand down early this month. The unit averages four-tenths of a mile of finished road each day, with a one-day record of nine-tenths of a mile.

Workdays average more than 12 hours for the nearly 1,000 construction, security and support troops assigned to the task force.

The road that they&#8217;re replacing was little more than a dirt trail when they started.

Early on, Task Force Pacemaker Commander Lt. Col. Paul Paolozzi said, it took the task force 13&#189; hours to move a 62-vehicle convoy over a 37-mile stretch of the road. Now, the same trip would take about three hours.

The task force also is nearly self-sufficient. It up two forward operating bases along the route and an additional small construction base between the two to support the troops.

Soldiers also have to face Taliban fighters in the area. They&#8217;ve been hit with roadside bombs and ambushes during their five months along the road.

Despite the tough conditions &#8212; and even some doubts about their ability to meet a Sept. 15 deadline &#8212; the road is nearly complete. The two construction crews &#8212; one working south from Tirin Kot and the other north from Kandahar &#8212; were within sight of each other as of Saturday.

Soldiers are ready to finish the road.