In Afghan town cited as a success, still a long road ahead 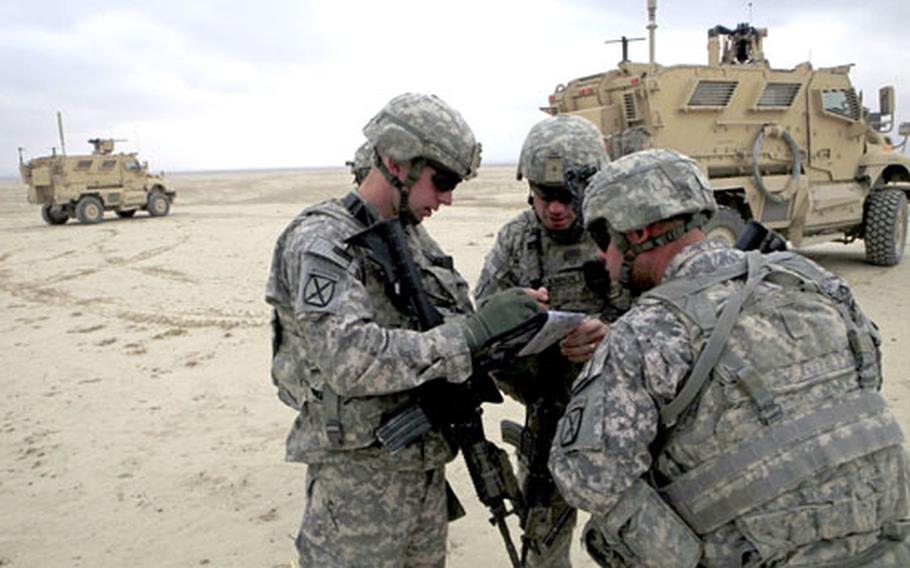 U.S. Army 1st Lt. Kevin Ellerbrock, left, looks at a map with Staff Sgt. Bejnjamin McKinnon, center, and another unidentified soldier as they prepare to go on a patrol near the town of Baraki Barak, Logar province, Afghanistan, last month. (Dario Lopez-Mills / AP)

U.S. Army 1st Lt. Kevin Ellerbrock, left, looks at a map with Staff Sgt. Bejnjamin McKinnon, center, and another unidentified soldier as they prepare to go on a patrol near the town of Baraki Barak, Logar province, Afghanistan, last month. (Dario Lopez-Mills / AP) 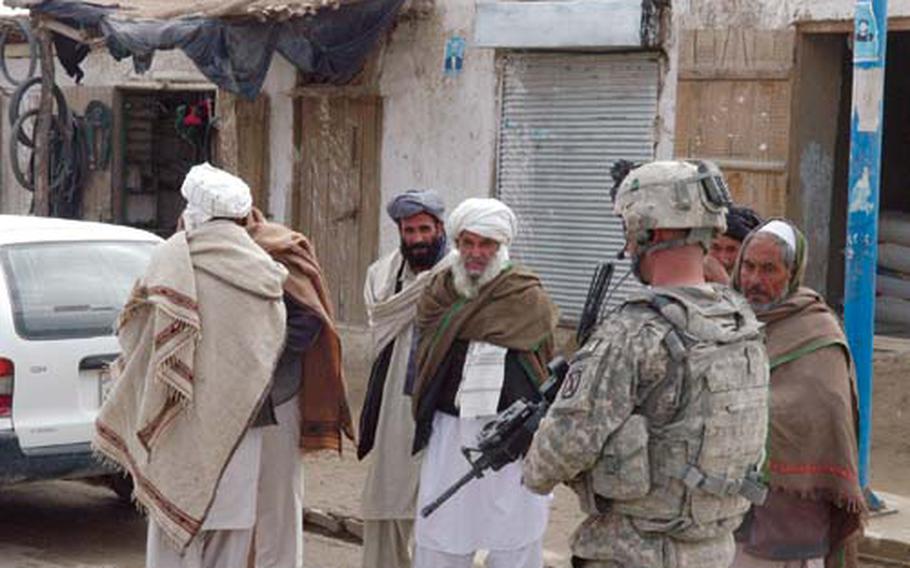 LOGAR PROVINCE, Afghanistan &#8212; Within hours of President Barack Obama&#8217;s announcement of a new surge of 30,000 troops into Afghanistan, the man charged with winning the war stood before reporters in Kabul and offered what he said was a shining example of how the new counterinsurgency strategy can succeed: the Baraki Barak district of embattled Logar province.

"Some months ago, it was almost under complete insurgent control," Gen. Stanley McChrystal said. "Now with a partnership between coalition forces, Afghan forces and local government and some smart counterinsurgency techniques, some reinforcement of local leadership, violence is down something like 80 percent and it is all because we link up and partner and we make it work."

Yet on the ground here in Baraki Barak, the picture is not so clear.

Much of the counterinsurgency push here has revolved around creating what the Americans call a &#8220;security bubble&#8221; in this rural area of 150,000. Inside the bubble, residents are given aid as they cooperate with the local government and U.S. military &#8211;&#8212; an example that U.S. commanders hope villages outside the bubble will want to emulate when they see how their neighbors are prospering.

But the bubble only covers about one-fifth of Baraki Barak, and about half its population.

Farmers gathered at the government center for an agriculture meeting Wednesday expressed similar sentiments, noting that they are intimidated by Taliban insurgents and gangs belonging to the Haqqani warlord network if they dare to participate in any government or U.S. military projects. As a measure of the threat, an Afghan government official was murdered in the district last month.

Some local residents said they felt safer before U.S. forces arrived, when the enemy could not target them for working with the outsiders.

Just this week, U.S. troops met with teachers at a school just outside the combat outpost to discuss development projects. Soldiers reported that local children threw rocks at them.

For all the difficulties, however, U.S. officials say they are encouraged by the progress here.

Capt. Paul Shepard, commander of Troop A of the 3rd Squadron, 71st Cavalry Regiment, said that since his unit arrived here in March, the goal has always been to establish a foothold near the government center and then expand from there &#8212; a process that will take time.

Progress here has meant helping to empower the local government and steering locals to the government center in order to get things done, Shepard said.

&#8220;It&#8217;s all these key players coming together at the district center,&#8221; Shepard said of the compound&#8217;s daily mix of government officials, farmers, U.S. forces, and Afghan soldiers and police officers. &#8220;You&#8217;ve got all these pieces of government, a mayor, a sub-governor and they start to do these little projects and these productive measures and it starts to be more effective.&#8221;

Part of the security bubble concept involves an &#8220;extreme makeover&#8221; program, propagated in a variety of Logar districts with varying success by Lt. Col. Tom Gukeisen, the commander of the 3-71.

The extreme makeover involves giving locals items such as generators and mosque refurbishment kits that they can put to immediate use.

Yet even those basic efforts have involved complications, Shepard said, with some villages reporting the theft of generators by the Taliban.

Another focus for American forces has been engaging local leaders, particularly District Governor Mohammed Yasin Ludin, a nonelected official whose uncle is the provincial governor.

Ludin lives in Kabul and commutes to the district three to four days a week, Shepard said.

While noting that he&#8217;d prefer the district governor to actually live in Baraki Barak, Shepard said Ludin has proved adept at bringing locals together and is responsive to their problems. He has also been helpful when U.S. forces need to explain less palatable counterinsurgency practices, such as the occasional night raid.

Residents list night raids by U.S. forces and detention of locals as an upsetting part of the new order.

&#8220;That scares families and children,&#8221; said Mohammed Sadiq, a farmer who came to the government compound Wednesday. &#8220;They&#8217;re walking around and arresting innocent people. American people came here for solving the problems, but we are facing the problems.&#8221;

Troops in Afghanistan weigh in on the speech

The latest on the Afghanistan plan from The Associated Press