In a sea of remains, a US military dog tag is found 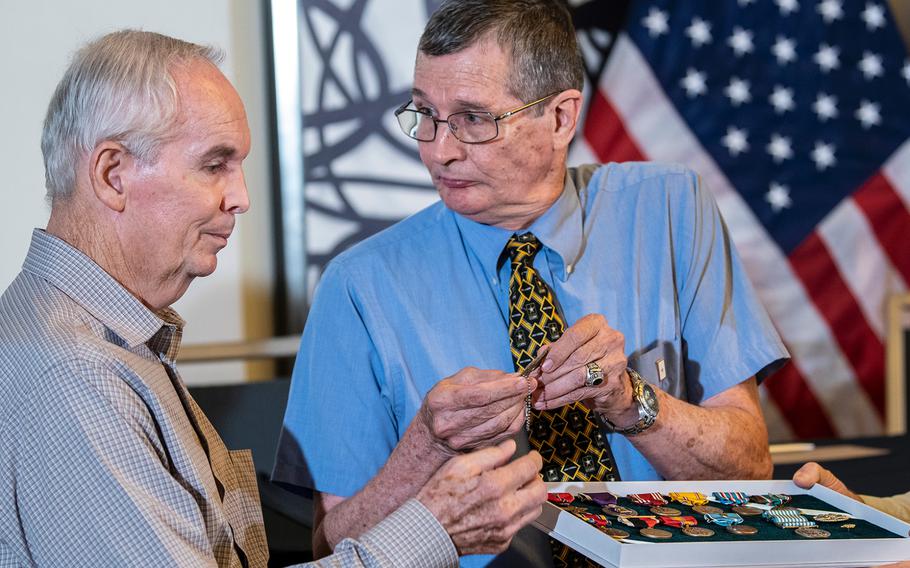 Buy Photo
Charles McDaniel Jr. looks at his brother Larry while holding the dog tag that belonged to their father, Army Master Sgt. Charles H. McDaniel, who was listed as missing in action during the Korean War in 1950. The dog tag was among the 55 caskets of remains that North Korea handed over to the United States in July 2018. The box contains all the medals Master Sgt. McDaniel was awarded while he served in the Army, including a Purple Heart issued posthumously. (Carlos Bongioanni/Stars and Stripes)

WASHINGTON — When North Korea turned over 55 boxes of remains believed to be American servicemembers last month, the McDaniel family wondered if their late father could be among them.

On Aug. 2, a phone call to the Indianapolis home of retired Army Chaplain (Col.) Charles McDaniel Jr. answered that question.

“We found one dog tag, it’s your father’s,” an Army official told McDaniel Jr., 71. “I sat there and cried for a while. It took a while to compose myself.”

Army Master Sgt. Charles Horbert McDaniel, a medic who also fought in World War II, went missing in the Korean War nearly 70 years ago and hardly got to know his two sons. McDaniel Jr. went on to serve a long career in the military, while his younger brother Larry McDaniel, 70, gravitated towards a career in athletics.

McDaniel Jr. was only about 3 years old when their father disappeared in November 1950, joining the 7,700 left missing in Korea to this day. Larry McDaniel said he doesn’t remember his father.

“We were very small children,” McDaniel Jr. reflected Wednesday during a news conference at a hotel in Arlington. “We certainly were not anticipating [this]. We really, in some sense, are fortunate.”

The moment marks the first physical confirmation that U.S. servicemembers could be among the remains turned over by North Korea on July 27. Officials for Defense POW/MIA Accounting Agency, or DPAA, said the dog tag underwent a comprehensive authentication process to confirm the finding.

The transfer followed an agreement made by North Korean leader Kim Jong Un and President Donald Trump when they met in June in Singapore. It was the largest unilateral turnover of remains from the North Koreans to the United States on record, but it’s not clear how many individuals were contained in the 55 boxes.

McDaniel’s military dog tag was the only personal affect found in the transferred remains, officials said Wednesday. Larry McDaniel also participated Wednesday in a DNA swab test to determine whether any human remains turned over last month belong to his father, which officials said could be possible.

“We are going to look very carefully at the remains boxed with the dog tag,” DPAA director Kelly McKeague said.

Of the 7,700 missing American servicemembers who fought in the Korean War between 1950 and 1953, about 5,300 remain in North Korea, according to DPAA, the group in charge of searches for missing troops and prisoners of war.

The Pentagon recently said it would double the size of its Hawaii-based team responsible for identifying the Korean War remains from five to 10 scientists. Last month’s transfer is the first from North Korea in more than a decade. The team has already begun collecting DNA samples and examining teeth and bones to begin the process of identifying the individuals, officials have said.

“For over 10 years we have not had any movement with Korean War losses,” McKeague said. “Many of the Korean war families were very frustrated… 11 years later, we might finally have progress.”

That process could take anywhere from a couple of months to several years. For example, some remains recovered in the 1990s still have not been positively identified.

In addition to human remains, the boxes contain several artifacts that appear to belong to American servicemembers who served in the Korean War, including mess kits, boots, gloves, buttons and metal parts of uniforms. There are also apparent human remains in the boxes, including fragmented bones that could later tell a story of who they were and how they perished.

Many of the boxes contain remains recovered from the North Korean village of Sinhung-Ri, a town just east of the Chosin Reservoir, officials have said. American soldiers and Marines fought in November and December 1950 along the infamous reservoir against Chinese troops during a brutal and frigid battle that cost thousands of lives.

DPAA officials expressed hope Wednesday that North Korea and the United States would soon reach an agreement to allow DPAA teams to return to the North to conduct search operations alongside North Korean troops for the first time since 2005.