In a reversal, Army to develop modified combat fitness test for injured soldiers 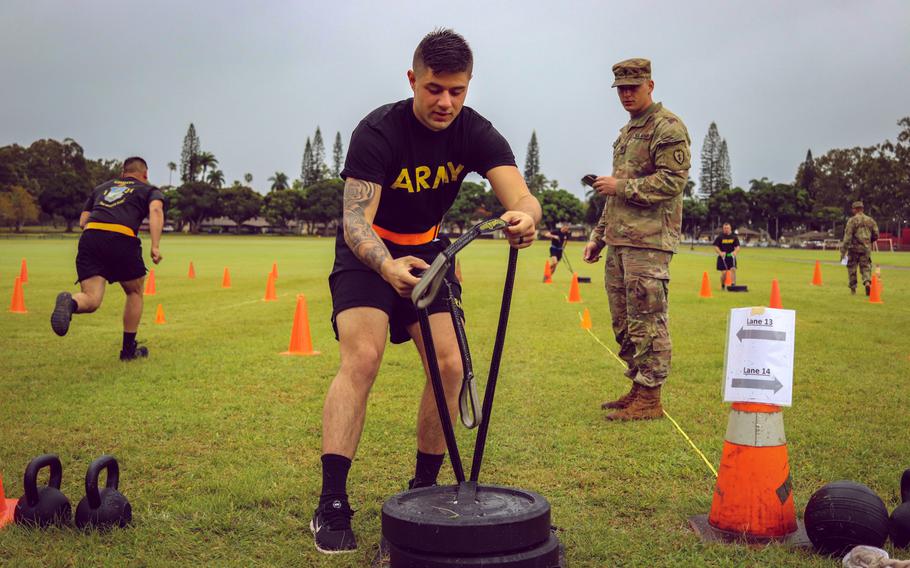 The Army is developing alternative aerobic events for soldiers whose injuries prevent them from fully participating in its new combat fitness test, the service said in a statement on Monday.

By the fall of 2020, the Army Combat Fitness Test will be required Armywide and will include six standard events: deadlift, standing power throw, hand-release pushups, “sprint-drag-carry,” leg tucks and a two-mile run. Initially, no alternatives were planned, but the new proposal could cut the test to half as many events for injured troops, giving them a choice to row, bike or swim instead.

The Center for Initial Military Training, which has been developing and tinkering with the new gender- and age-neutral ACFT, is expected to soon begin evaluating the three alternate events at the 63 battalions that have been field-testing the new standards since last fall, the statement said.

If the modifications are approved, injured soldiers would still have to complete as many standard events as possible, but at a minimum would have to do the three-repetition maximum deadlift, the sprint-drag-carry and one of three substitute events — a 5,000-meter row, a 15,000-meter stationary bike or a 1,200-meter swim, any of which is to be completed in 25 minutes or less — the statement said.

“The alternate events measure minimum attributes soldiers need to fight, render aid to others and decrease risk to themselves in a combat environment,” it said.

Not all injured soldiers would be allowed to take the modified test, however. The new events will be open only to certain soldiers on “permanent profile,” or those injuries or medical conditions that significantly limit their activities or their job, as approved by a physician and a second opinion, officials said.

“For example, those permanent profile soldiers who are incapable of running long distances, they could be allowed to complete an alternate aerobic event,” said Michael McGurk, director of research and analysis at CIMT, as quoted in the statement.

Some soldiers have found the new test much more challenging than the current three-event physical fitness test was introduced in 1980, but the service believes the six-event ACFT is a better gauge of how soldiers will perform in combat. It spent six years developing the new test, and joins the Marines, Navy and Air Force in adopting new fitness standards.

Last summer, officials said alternative events had not been planned because soldiers with injuries that kept them on a long-term medical profile were likely to be subject to then-Defense Secretary Jim Mattis’ “deploy-or-be-removed” policy, which called for troops who were nondeployable for more than 12 months to be processed for administrative separation.

“Somebody who has a long-term permanent profile that precludes taking a fitness test may not be retainable for duty in the Army,” McGurk said in a July statement.

In March, McGurk told Stars and Stripes that the Army’s goal for every soldier on profile was to rehab and then take the full ACFT. Those who could not would be evaluated for retention or separation.

The modified version of the test, if approved, could be used as part of the medical and physical evaluations of a soldier’s fitness to continue to serve, McGurk said in the latest statement. “This allows commanders to deploy these soldiers ‘with risk’ and determine if the risk is acceptable based on soldiers’ skills and nature of the mission.”

Officials are not expected to make a final determination on the ACFT’s standards until Oct. 1.