In a Mahdi Army stronghold, where no one has seen the militia, troops struggle to find renegade fighters 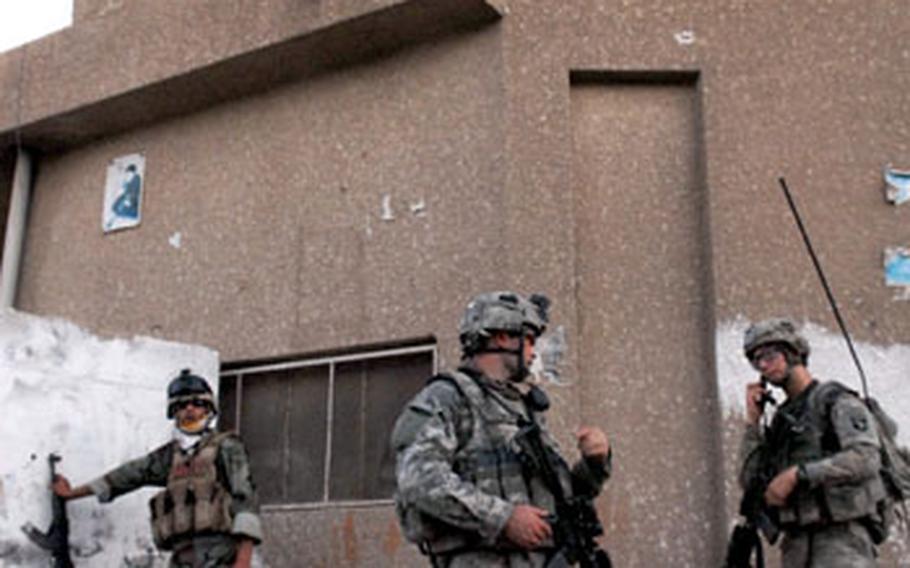 Soldiers from Company B, 1st Battalion, 502d Infantry Regiment patrol through the early morning streets of Shula on the way to the site of a supposed weapons cache. (Michael Gisick / S&S) 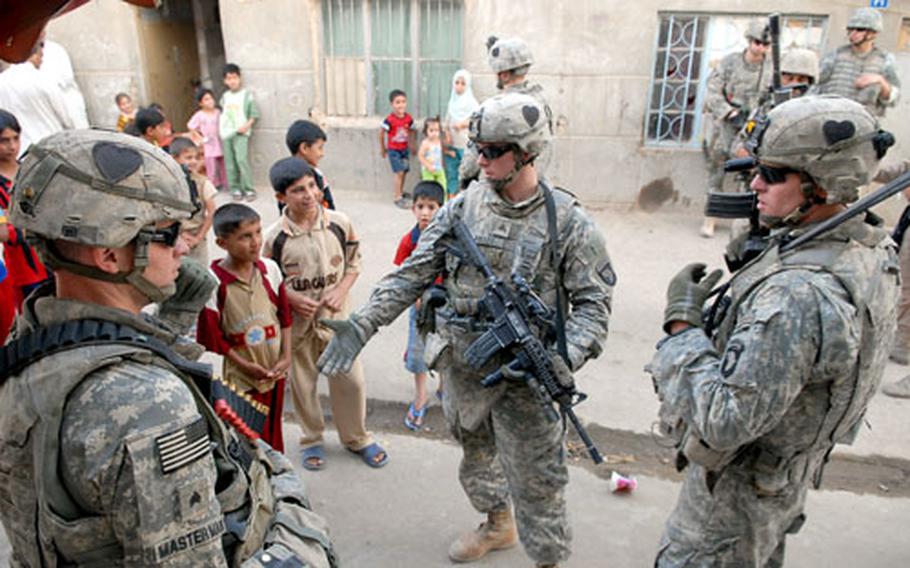 Staff Sgt. Robert Smith, far right, during a patrol in the northwest Baghdad neighborhood of Shula. Stepped up patrols by U.S. and Iraqi troops have brought the neighborhood under control since fighting erupted here in late March, soldiers say, but the poverty and lack of essential services that have long given militias an opening remain problematic. (Michael Gisick / S&S)

BAGHDAD &#8212; Staff Sgt. Robert Smith, a buff 31-year-old from North Carolina, strides down a narrow alley in the northwest Baghdad neighborhood of Shula. He has just spent 10 minutes sequestered in a room with an interpreter and an Iraqi homeowner, trying to convince the man to give up what he knows about the militias.

Which, the man insisted, was nothing. No one in the neighborhood followed Muqtada al-Sadr, he volunteered as the questions started to get tense.

Smith had laughed lightly at this, nodding. In an area decorated with billboards honoring the "martyrs" of al-Sadr&#8217;s Mahdi Army, it was a familiar refrain: A militia stronghold where no one has seen the militia, Smith jokes as he moves his patrol back out into the dust-heavy heat of a late afternoon earlier this month.

But his sense of humor, half sarcasm and half swagger, holds up. Approaching a group of men gathered on a corner, he extends a hand.

In the wake of the fighting that erupted here and in other Shiite areas of Baghdad in late March, both the U.S. and Iraqi militaries have stepped up their presence in places like Shula, an impoverished neighborhood of about 80,000 that some U.S. troops call "little Sadr City." (Iraqi troops posted in the neighborhood jokingly refer to it as "Kandahar.")

As a result, U.S. officers say, many of the militia leaders who used the neighborhood as a base have either fled or gone into hiding. Violence across Iraq, which spiked in April as a result of the fighting in Sadr City and other Shiite areas, fell to the lowest levels of the war in May and remained at relatively low levels last month.

But exactly who those militiamen were &#8212; a question that leads to a few significant follow-ups, like why they were fighting and whether they will fight again &#8212; depends in no small part on who&#8217;s describing them. Under the official view, the military has essentially defined al-Sadr&#8217;s Mahdi Army out of existence. Because al-Sadr has not lifted a cease-fire he announced last year, any groups fighting since then are de-facto renegades or "Special Groups."

But ordinary Iraqis and most U.S. ground troops continue to refer to the militias as Jaish al-Mahdi, or "JAM."

Some ground commanders involved in recent fighting have described their foes as "mainline" Sadrists who have neither broken with nor been rejected by the influential anti-American cleric. Other commanders say it&#8217;s virtually impossible to know whether some groups are acting with al-Sadr&#8217;s blessing or not.

In mid-June, al-Sadr announced plans to forgo direct participation in this fall&#8217;s local elections and form a new, smaller militia dedicated to attacking to U.S. troops.

The distinction between Sadrists and "Special Groups" is not a matter of semantics. Though he has struggled to control his militia in recent years, al-Sadr remains a potent force in Iraqi politics whose family has deep roots among Iraq&#8217;s poorer Shiites. He has proved capable of "dialing up" violence at will, as retired U.S. Lt. Gen. Richardo Sanchez put it this spring.

By contrast, as defined by the U.S. military, the "Special Groups" have little in the way of ideology or political philosophy. Commanders have become increasingly resistant even to describing the groups as "militias."

The term "Special Groups" describes Shiite fighters who the military believes were trained and armed by Iran or by Hezbollah. The military blames Iran for supplying the groups with the deadly roadside bombs known as "explosively formed penetrators."

Since the beginning of this year, the Pentagon has put out 106 separate news releases including references to "Special Groups" and just seven referring to the Mahdi Army.

"They&#8217;re extremist organizations that use criminal activity to meet their ends," said Col. Bill Hickman, commander of 2nd Brigade, 101st Airborne Division, which patrols much of northwestern Baghdad. "We&#8217;re not at war with JAM. We target individuals who break the rule of law."

Commanders on the ground largely echo that sentiment, saying they define their enemies based on specific intelligence, not affiliation.

"If we see somebody wearing a JAM T-shirt and they&#8217;re not attacking anybody or doing anything against the law, we&#8217;re going to leave them alone," said Capt. Jeremy Ussery, commander of Company B, 1st Battalion, 502nd Infantry Regiment, which patrols Shula. "We&#8217;ll work with anyone who is pursuing peace."

That includes Sadrists, Ussery said. Referring to the "Sons of Iraq" security program that has employed tens of thousands of mostly Sunni Iraqis, some of whom are believed to be former insurgents, Ussery said, "we&#8217;re not about holding grudges."

Still, many observers see the clashes this spring, which began with an Iraqi Army offensive in Basra, as an effort by Prime Minister Nouri al-Maliki to marginalize al-Sadr ahead of the fall elections. And it goes without saying that few American commanders see al-Sadr as an ideal Iraqi leader.

"Every Iraqi I&#8217;ve spoken to has blamed it all on Sadr," Baine said of the recent fighting. During his weekly addresses on Iraqi radio, Baine has begun directly challenging the cleric&#8217;s prestige.

When it comes to preventing renewed fighting, officers say their strategy &#8212; keyed on establishing security and bolstering essential services &#8212; will work no matter who the militias are. Whatever they are called, they can only thrive in a vacuum where the government has failed, officials say.

The second part of the equation, however, remains a challenge. As part of his recently-announced reorganization, al-Sadr has said he will turn the bulk of his militia toward public works projects.

That fact confronts Smith, the staff sergeant, during his patrol in Shula. After a round of handshakes, the men on the street begin asking questions of their own. One asks who is in charge of electricity.

This time, he gets a laugh.