In a friendly corner of Iraq, the faintest U.S. footprint 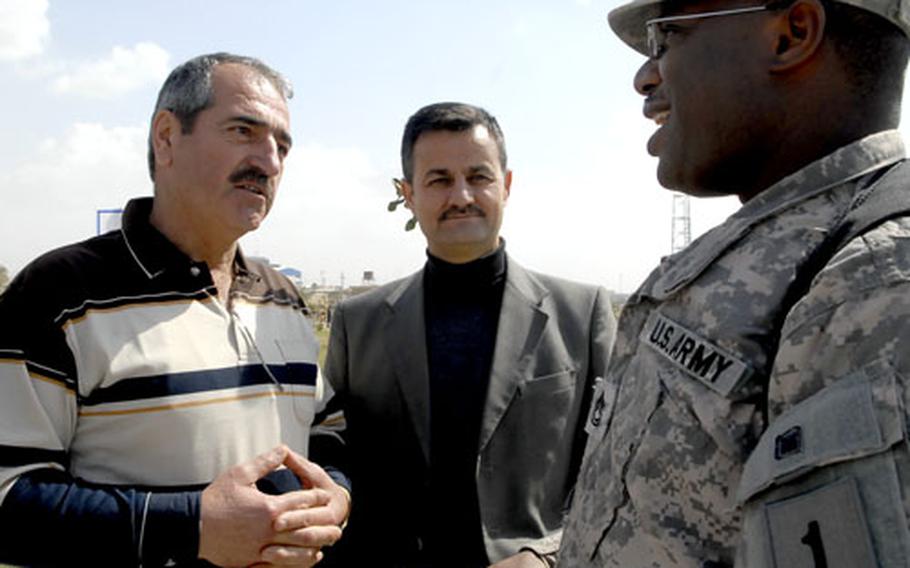 Sgt. 1st Class Octavius Brandon, right, talks to a Kurdish man who stopped him outside an Irbil festival. American troops get a much friendlier reception in Iraq’s Kurdish provinces than in much of the rest of the country and most Kurds ask for more U.S. troops, rather than a speedy withdrawal. (Heath Druzin / S&S)

Sgt. 1st Class Octavius Brandon, right, talks to a Kurdish man who stopped him outside an Irbil festival. American troops get a much friendlier reception in Iraq’s Kurdish provinces than in much of the rest of the country and most Kurds ask for more U.S. troops, rather than a speedy withdrawal. (Heath Druzin / S&S) 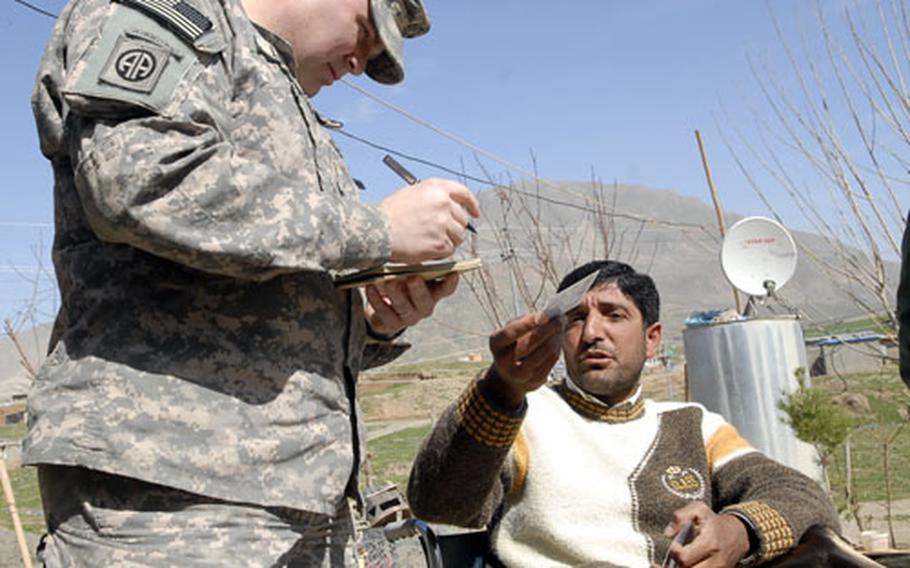 Maj. Jim Lawson, left, talks to a refugee living in Iraq&#39;s Kurdish semi-autonomous region. Lawson and other members of the 4100 Border Transition Team work on everything from training border guards to humanitarian efforts. (Heath Druzin / S&S) First Lt. Richard Myers leans on an sport utility vehicle after a long day on the road. Myers and nine other members of the 4100 Border Transition Team are responsible for three provinces that make up Iraq&#39;s Kurdish semi-autonomous region. (Heath Druzin / S&S)

IRBIL, Iraq &#8212; Maj. Jim Lawson is a master of the lane-as-a-suggestion school of driving. He drifts with the rhythm of local traffic in this gridlocked metropolis, straddling faded lines, giving a friendly honk to less attentive drifters who get too close.

Lawson embraces the madcap local driving customs because he has to: When he goes on missions, he&#8217;s driving just another sport utility vehicle, not the armored, traffic-parting behemoths that are ubiquitous in the rest of Iraq. And he&#8217;s used his newfound skills a lot &#8212; he and nine Army counterparts in charge of Iraq&#8217;s three semi-autonomous Kurdish provinces have logged about 5,000 road miles since November, carrying out one of the most unique and lightly staffed missions in country.

Lawson and his fellow soldiers are part of the 4100 Border Transition Team, a unit whose primary role is to train border guards but in reality tackles everything from essential services projects to refugee issues.

There are fewer than 100 regular soldiers (not counting Special Forces) in the Kurdish zone and most of them are support staff who rarely leave Camp Zaytun, a rough-hewn outpost on the brown bluffs overlooking Irbil. A new U.S. border team recently arrived in Sulaymaniyah province, but that means only roughly 10 more soldiers, which brings the number of troops who operate &#8220;outside the wire&#8221; to about 20 in an area that includes 1,000 kilometers of Iraq&#8217;s border.

The soldiers are welcomed and, in a country where there is overwhelming frustration with the U.S. mission in Iraq, most Kurdistan residents not only ask the U.S. to stay, they demand more troops and a U.S. consulate.

On a recent stroll through the streets of Irbil, Sgt. 1st Class Octavius Brandon was stopped by a local Kurd, who praised the job the U.S. has done in Iraq. It&#8217;s a part of the mission Brandon and other team members say they relish.

The region, commonly known as Kurdistan, has long enjoyed a large measure of independence due to a no-fly zone enforced after the Gulf War and has prospered relative to the rest of Iraq. It has its own government, its own flag, and Kurdish, not Arabic is the lingua franca of the region.

It also has remained largely free of the violence that has wracked the rest of the country, with Kurds generally much more supportive of the invasion than Arab Iraqis.

Partly because of that security, the U.S. has concentrated forces in the more restive Arab-majority provinces to the south.

Lt. Col. Mike Russell said Kurdistan needs at least a doubling of U.S. forces to do the work necessary to improve conditions in the region. Russell thinks this is more than a nice gesture.

&#8220;If there were more Americans in the Kurdish zone it would be beneficial to both sides &#8212; one, it would lessen the chance they would declare independence,&#8221; said Russell of a possibility that many experts think would ignite a regional war.

Lack of help and equipment is a constant frustration for Russell. With roadside bombs and other violence against coalition forces almost non-existent in the province, Russell is very hesitant to drive around in the hulking mine resistant ambush protected vehicles (MRAPs), which tie up traffic and tear down low-hanging power lines. It&#8217;s also a safety precaution due to the narrow, treacherous mountain roads the team must often navigate.

Many times, though, Russell finds his travel options limited because he often doesn&#8217;t have enough SUVs to go out. Orders for more have gone unfilled. He sometimes borrows trucks from the Kurdish government just to get off the base.

Despite the difficulties and lack of staff, Russell has made it a priority for his team to get to far-flung parts of Kurdistan, mainly to do training for border police in a region that acts as a heroin smuggling pipeline between Iran and Turkey, which is often used by drug runners as a gateway to Europe.

Rooting out insurgents isn&#8217;t part of the mission, largely because there are almost none to be found.

It&#8217;s not as if there is no threat. In May 2007, a truck bomb blew up outside the Ministry of the Interior in Irbil, killing more than a dozen people.

And despite the lack of violence, there are plenty of militants in Kurdistan. Thousands of members of the Kurdistan Worker&#8217;s Party (PKK), designated a terrorist group by the U.S. government, operate in the rugged mountains on Iraq&#8217;s border with Turkey.

But the PKK concentrates its fight on Turkey, who it says oppresses Kurds, and neither the U.S. nor Iraqi government has any stomach for confronting them (Turkish troops do engage in cross-border raids from time to time).

U.S. troops are actually forbidden from venturing into PKK territory.