In a first, Chinese military deploys for medical drill with German forces in Europe 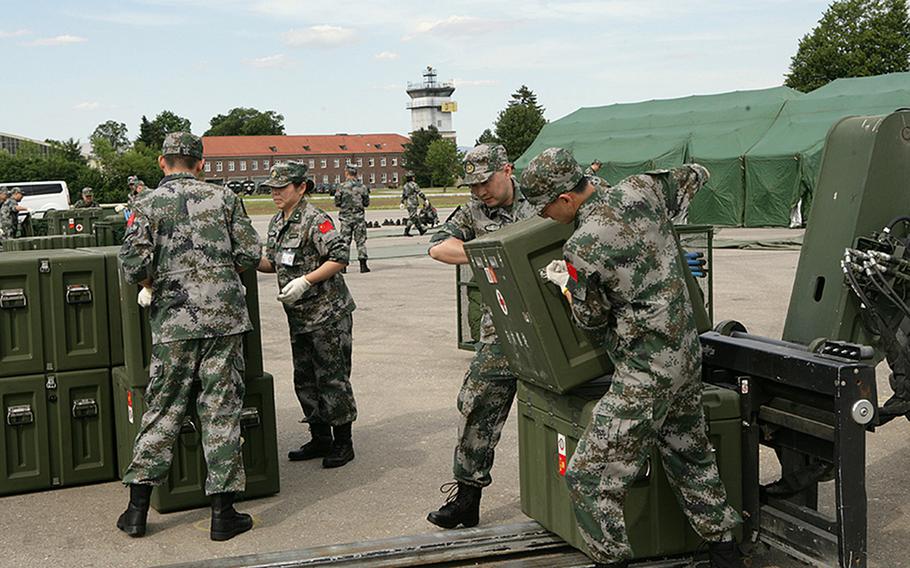 STUTTGART, Germany — The Chinese army for the first time has deployed armored medical vehicles and personnel to Europe to conduct training with the German military, marking a groundbreaking foray into NATO territory.

The exercise, dubbed Combined Aid 2019 and involving about 100 Chinese People’s Liberation Army medics, is a joint drill in the Bavarian town of Feldkirchen focused on responding to a simulated cholera outbreak.

The exercise takes place at a time of growing strains between the German government and the Trump administration over a range of issues, including Berlin's laggard defense spending and Germany's support for a natural gas pipeline from Russia.

“The participating teams will practice joint command and control and will learn to cooperate in treating and managing mass casualties in large-scale disease outbreaks,” the Chinese Defense Ministry said in multiple state-controlled media outlets as the exercises began last week.

The two-week exercise set to end July 17 has garnered headlines in China, where the training in Germany was characterized as part of an effort to strengthen ties with European nations.

Yue Gang, a retired PLA colonel, told the South China Morning Post that the exercise was a breakthrough given that NATO is wary of China’s military development.

“The PLA in the future will need to go abroad to protect China’s overseas interests in countries along the Belt and Road Initiative, and if there could be some basic mutual trust and understanding with NATO forces, the risk of potential conflict could be greatly mitigated,” Gang told the Hong Kong-based newspaper.

Beijing is developing a global network of ports, railways and roads to advance its trade interests, including in Europe, as part of its Belt and Road campaign.

Jorge Benitez, a NATO expert with the Atlantic Council in Washington, said Germany’s hosting of the Chinese military and the way it is playing in China “gives the impression that NATO allies are disagreeing with the U.S. and seeking better relations with China.”

“The presence of the Chinese military in Germany for this exercise creates very bad optics for Germany, NATO and the U.S. and is a cheap propaganda victory for China,” Benitez said.

German defense officials have played down such concerns, saying the exercise is about protecting civilians from disease and epidemics.

China’s military brought new medical equipment for the drills, including “a new generation” field tent hospital system, tracked and wheeled armored ambulances and other gear to “demonstrate the new developments and achievements of field ambulance technology vehicle made by the Chinese army,” the defense ministry statement said.

The exercise, while small and not focused on combat, comes as Washington attempts to pressure its allies in Europe to take a tougher stance on China.

In recent months, it has intensified pressure on NATO members to avoid China’s Huawei 5G telecom infrastructure, which American officials say poses a threat and would force Washington to cease certain types of information sharing.

But the U.S. also is trying to unite allies at a time when Berlin and Washington have been at odds on a range of issues, including German defense spending levels and trade disagreements. On Monday, a German government spokesman also rejected a request by the U.S. that Berlin send ground troops to Syria to provide relief for American forces that are part of the anti-ISIS coalition.