In 1969, an airman crashed a stolen C-130 into the English Channel. Now divers want to find the plane 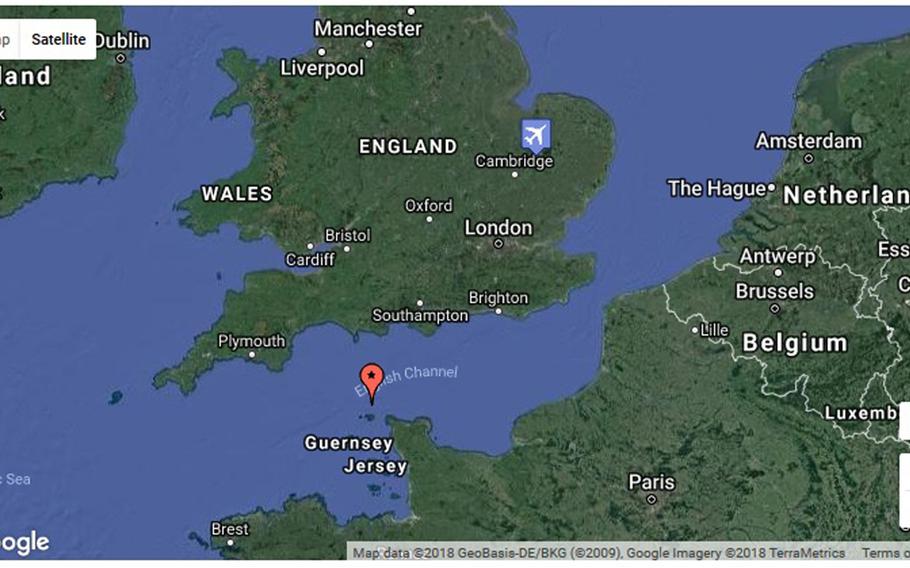 Estimated crash site of a C-130 Hercules stolen U.S. Air Force by St. Paul Meyer on May 23, 1969. According to an accident report by Lockheed Martin, Meyers was possibly shot down allied forces. ()

Estimated crash site of a C-130 Hercules stolen U.S. Air Force by St. Paul Meyer on May 23, 1969. According to an accident report by Lockheed Martin, Meyers was possibly shot down allied forces. () 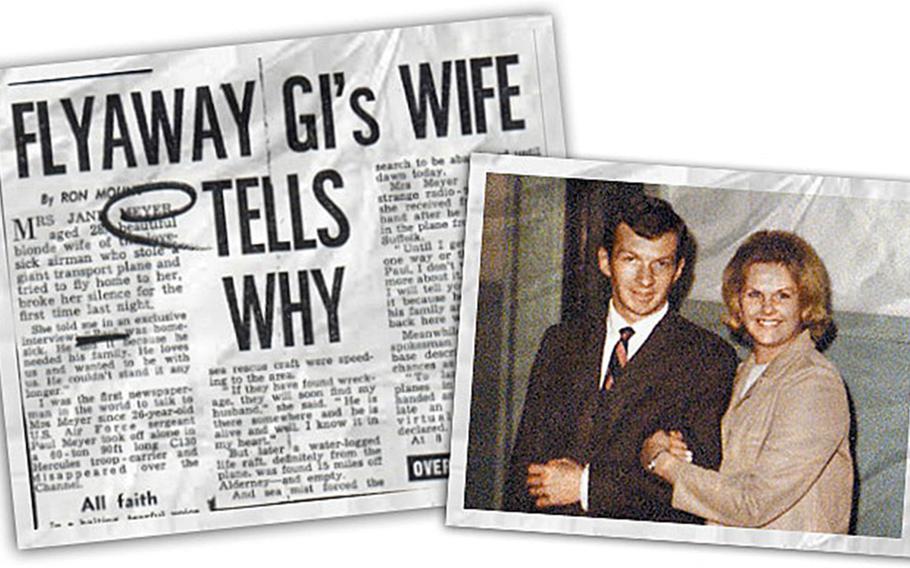 U.S. Air Force Sgt. Paul Meyer pictured with his wife, Jane, next to a newspaper clip from when Meyer stole a C-130 Hercules on May 23, 1969, so he could return home. (Deeper Dorset/courtesy photo) 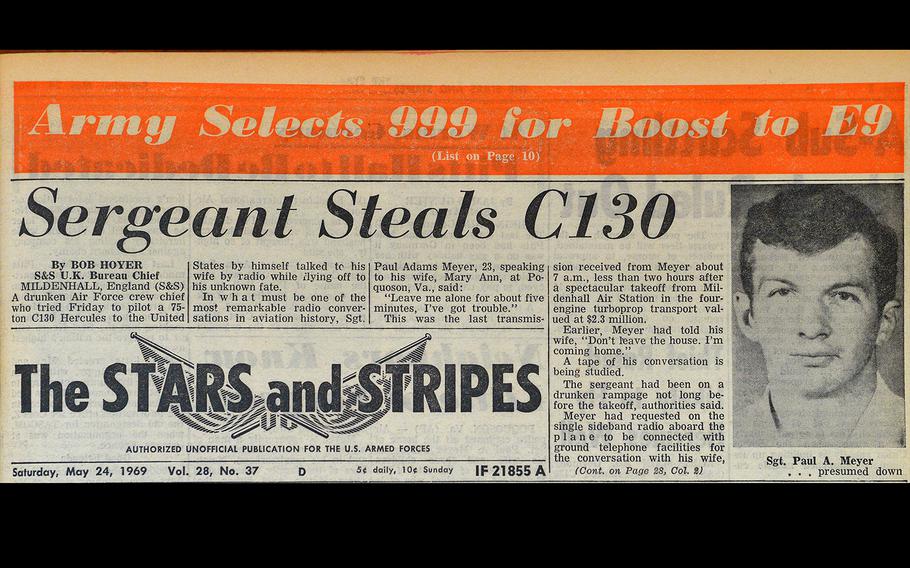 RAF MILDENHALL, England — Almost 50 years ago Sgt. Paul Adams Meyer, a U.S. Air Force assistant crew chief, got drunk, impersonated an officer and stole a C-130 Hercules from RAF Mildenhall in England so he could fly home to his new wife. Two hours later he crashed into the English Channel.

Now a team of British divers called Deeper Dorset hopes to raise 6,000 pounds ($8,430) on an all-or-nothing Kickstarter to find the plane and uncover the truth behind the crash.

The divers have until April 11 to meet their fund-raising goal or go back to the drawing board.

“We’ve known about the Hercules story for about 10 years, and it’s one of those stories that grabs the imagination,” said Deeper Dorset photographer Simon Brown. “It’s a human tale as much as research of as to where it is.”

What happened to Meyer has been subject to rumor and speculation for nearly half a century.

An Air Force investigation found that at least two U.S. F-100 Super Sabre fighter jets from RAF Lakenheath, a C-130 from Mildenhall and two RAF English Electric Lightning interceptors attempted contact with Meyers before he crashed into the English Channel near Alderney Island.

“Leave me alone for about five minutes, I’ve got trouble,” Meyer said in his final transmission to his wife in a link-up over the sideband radio.

Members of Deeper Dorset believe they can locate the missing Hercules using existing research, sonar and photogrammetry, a technique that builds 3-D models of wreckage.

“We’ve nailed down where we think the aircraft might be within a 10-square-mile box,” Brown said. “Within that box there’s five hot spots. Places where people have reported losing fishing gear or snagging something, and those kinds of snags are usually man-made.”

The diving team’s previous successes include locating La Mahenge, an 8,000-ton cargo ship found 120 meters deep in the English Channel, and a British M1 submarine found 81 meters deep in waters off the port of Plymouth.

The Kickstarter goal covers running costs of 25 days at sea, which is about a year of searching, taking into consideration weather and tides

“I think this project is too interesting to just let it pass, and with the Kickstarter goal it can happen sooner and we’ll be able to share more about what we find,” Brown said.

For more information or to donate, go to kickstarter.com/projects/979818757/finding-meyers-missing-hercules.