Improvising to save lives, medics use unusual tools to do their job in combat 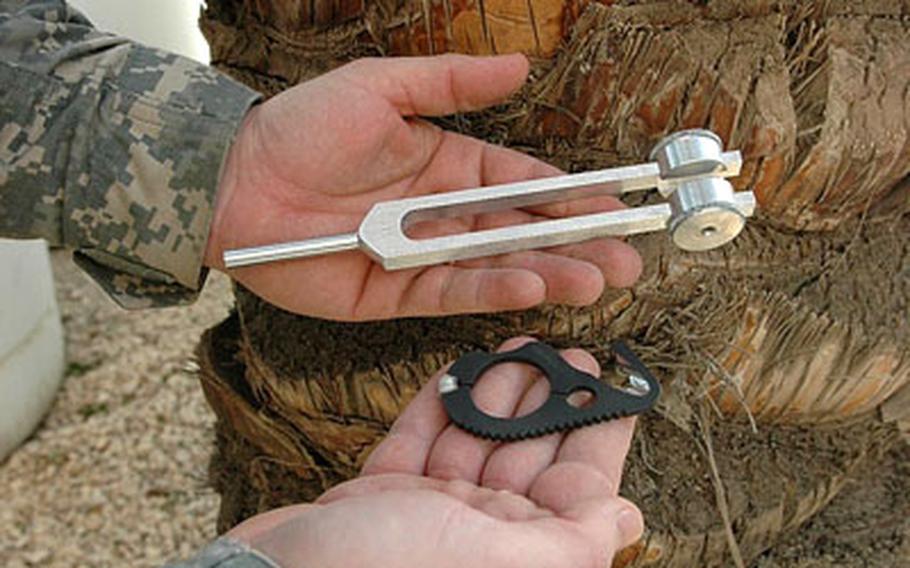 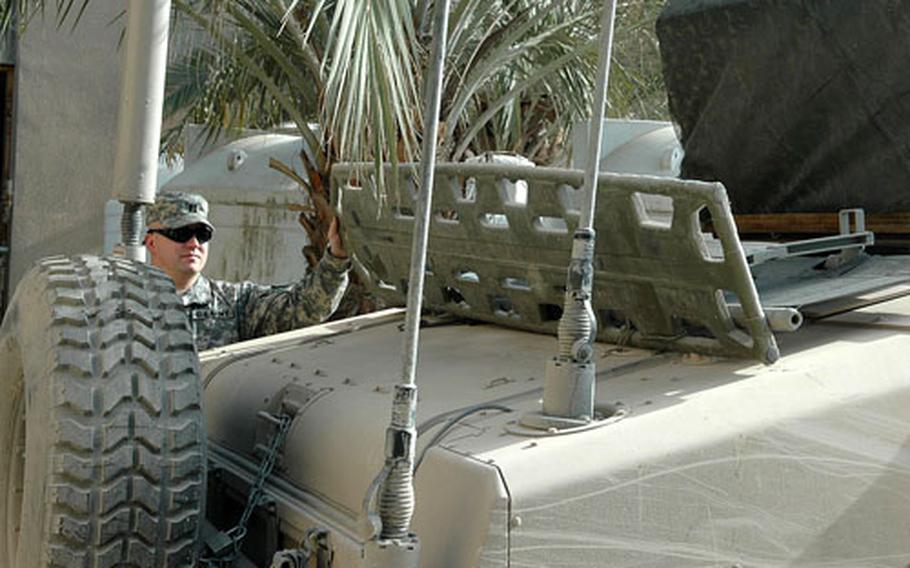 Cpt. Arne Oas shows both a standard stretcher - cut down to fit the interior of the vehicle - and a rigid backboard. The backboard normally lies flat in the back as it&#39;s toted around and then removed when needed. (Lisa Burgess / S&S)

BAGHDAD &#8212; The military calls them &#8220;field-expedient solutions.&#8221; In plain English, they&#8217;re alternate methods that work better under the pressure of combat.

Whatever you call it, war has a way of bringing out the creativity in troops &#8212; particularly when it comes to helping wounded buddies.

For example, here on the east side of Baghdad, just about every Humvee crew that&#8217;s logged heavy mission time on the mean streets has learned to strap a hard backboard on their vehicle in addition to or instead of the Army&#8217;s standard stretcher.

The standard-issue litters &#8220;do not fit inside up-armored Humvees, unless they are cut down,&#8221; Capt. Arne Oas, 35, a physician&#8217;s assistant from Haymarket, Va., who is with the 2nd Infantry Division&#8217;s Headquarters and Headquarters Company, 2nd Brigade, Special Troops Battalion at Forward Operating Base Loyalty.

The hard backboards, which are traditionally only used for patients suspected of having spinal injuries, are much shorter and fit inside the Humvee without modifications, he said.

Since they&#8217;re not flexible, they are also much more comfortable for patients, Oas said &#8212; not to mention the troops who may have them in their laps as they ride in the back with the patient, trying to keep pressure on wounds or just needing a quick ride back to the FOB in an emergency.

And in trauma medicine, every minute counts.

Another &#8220;field expedient&#8221; tool adopted by the aid station staff here at FOB Loyalty is the &#8220;rescue hook,&#8221; or seat-belt cutter, firefighters carry to get victims out of car crashes.

The rescue hooks are designed to cut through the tough, crash-resistant material that vehicle seat belts are made out of in seconds, when an explosion or fire in the vehicle is imminent.

That same hook makes quick work not just of clothing, but more importantly, of body armor, no matter how tangled, bloody, or mangled, Oas said.

The hooks work much more quickly than the standard trauma shears that come with every aid kit, he said.

The rescue hooks, which cost about $25 each, are not standard Army equipment, so if medics and others like them, they usually have to purchase their own.

One of the most unconventional tools at the FOB Loyalty aide station is the tuning fork, used to detect broken bones. The station has no X-ray machine.

If a vibrating tuning fork is placed in the right spot on the bone, right above a suspected fracture, the vibration will hurt, Oas said.

The tuning fork trick, which is about 90 percent accurate, sounds weird, but it is well-known to the special operations community, Surrett said.