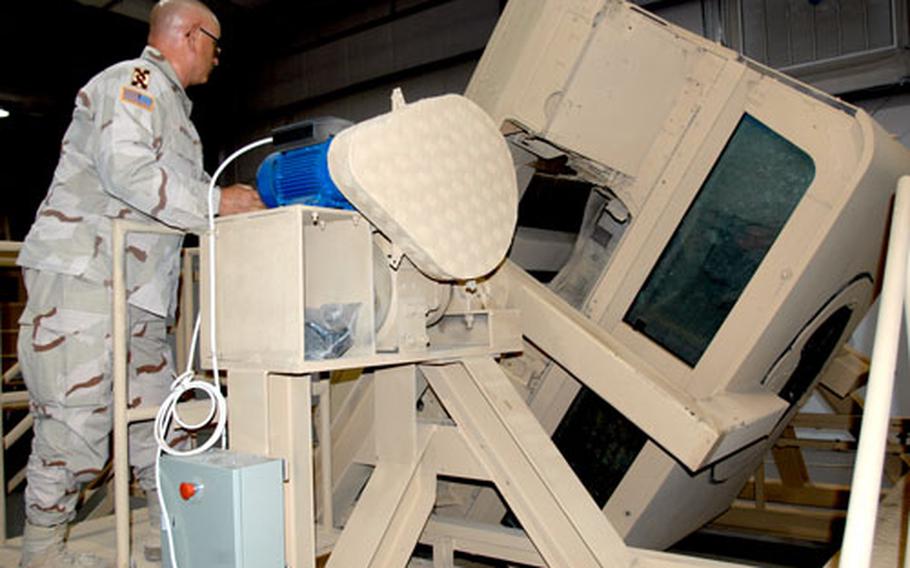 Army Lt. Col. Peter Winston, 143rd Transportation Command at Camp Arifjan, Kuwait, operates the Humvee rollover simulator as it flips upside down. The training device is made of scraps and battle-damaged Humvees and can flip 180 degrees in 6 seconds. (Jennifer H. Svan / S&S)

Army Lt. Col. Peter Winston, 143rd Transportation Command at Camp Arifjan, Kuwait, operates the Humvee rollover simulator as it flips upside down. The training device is made of scraps and battle-damaged Humvees and can flip 180 degrees in 6 seconds. (Jennifer H. Svan / S&S) 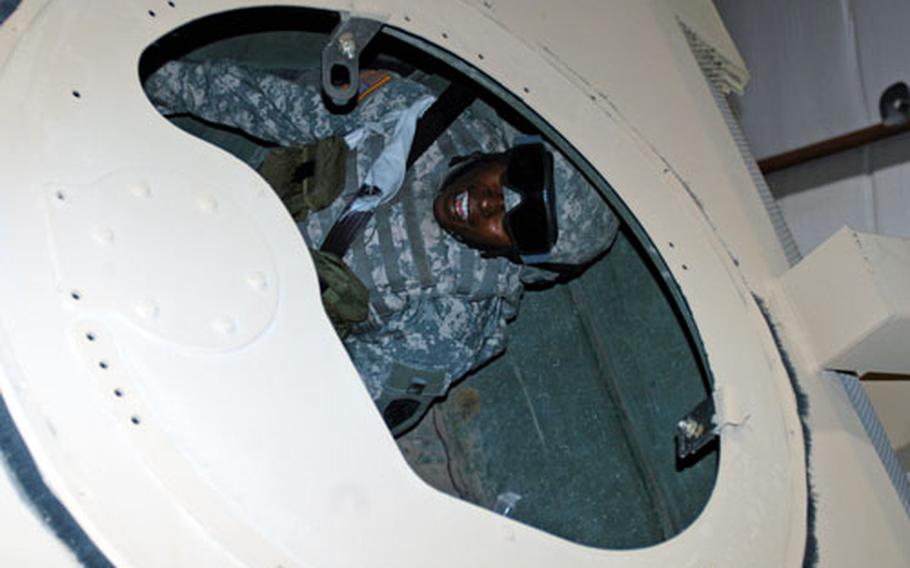 Army Sgt. Bridget Hagens, of the 3rd Personnel Command at Camp Arifjan, Kuwait, braces as the Humvee rollover simulator she’s riding tilts far to the side. About 8,000 soldiers have been trained since June in an effort to prevent injuries and death in Humvee rollovers. (Jennifer H. Svan / S&S) 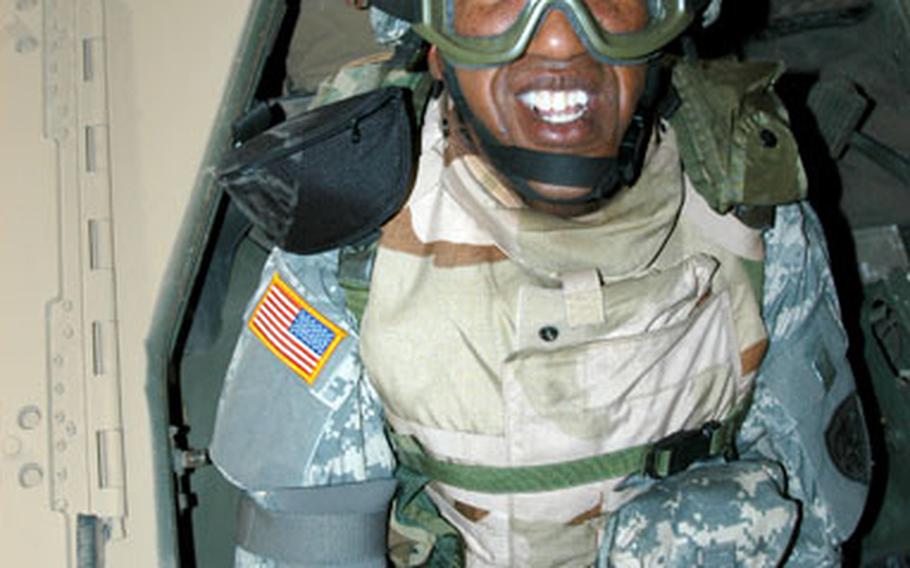 CAMP ARIFJAN, Kuwait &#8212; First it tips 25 degrees to the left. Then it creaks back again, this time tilting to the right. The sand-colored Humvee cab stops upright momentarily before flipping. But that&#8217;s where the ride abruptly ends &#8212; and the occupants must scramble to get out while suspended upside down.

The Humvee rollover simulator, despite how it looks, isn&#8217;t fun. Just ask soldiers who ate a mouthful of dust and struggled with their seat belts or doors. But few if any of the 50 GIs who took a spin in the device last week at this desert camp complained.

That&#8217;s the thrust of the Humvee Egress Awareness Training, or HEAT, which began at Arifjan in June with the aim of preventing soldier injuries and death in Humvee rollovers. Since the beginning of the Iraq war, more than 300 Humvee rollovers have been reported, killing at least 116 and injuring 132, according to U.S. Army statistics.

Army Materiel Command, Hermann said, is building 31 HEAT trainers for about $33,000 apiece to be placed throughout the theater, in Kuwait, Afghanistan, Iraq and Qatar. So far about 8,000 soldiers have been trained on simulators made from scrap or battle-damaged vehicles. The cabs are mounted to an elevated M-1 engine maintenance stand and are powered by a motor that can spin the device 180 degrees in 6 seconds.

&#8220;I know already it&#8217;s saved a life,&#8221; Hermann said, sharing the story of a soldier who never saw the value of wearing a seat belt until taking a spin in the simulator. One week after the training, he was in a rollover, buckled up. The soldier told Hermann the training convinced him to strap in and thinks he likely would have been killed otherwise.

Sherman said statistics indicate that about half of all injuries in Humvee rollovers could have been prevented with a little more knowledge of how to react. &#8220;What we&#8217;re finding is most people have never been in a rollover,&#8221; he said. &#8220;This gives them one experience point where they can think through what they need to do.&#8221;

Another reason for the training: More top-heavy Humvees are easier to roll. Maj. Joe Harden, 143rd Transportation Command safety officer, said the Army&#8217;s up-armored Humvees have about a 30-degree center of gravity.

New temporary armor inched the tipping point to about 25 degrees on its side, an angle that will drop again when yet more armor pieces weighing hundreds of pounds are added to the vehicles to replace the temporary plates.

The armor enhancements are designed to protect soldiers from roadside bombs, but some GIs point out the Humvee was never intended to be a tank and wonder when enough will be enough.

Harden said the Army never planned &#8220;on putting all this armor on. These things used to have canvass doors. Now they have steel-armor plates and bullet-resistant windows. Some roads (in Iraq and Afghanistan) have shoulders that are that steep. You get into Afghanistan, and you may have a 20-degree angle going down the hill. If you swerve to the right or to the left, this thing has a tendency to roll.&#8221;

According to Army statistics, 37 deaths have been reported in up-armored M1114 Humvee rollovers in Iraq.

The extra armor, however, brings comfort to some road warriors.