Improvisation can give cooks chance to shine 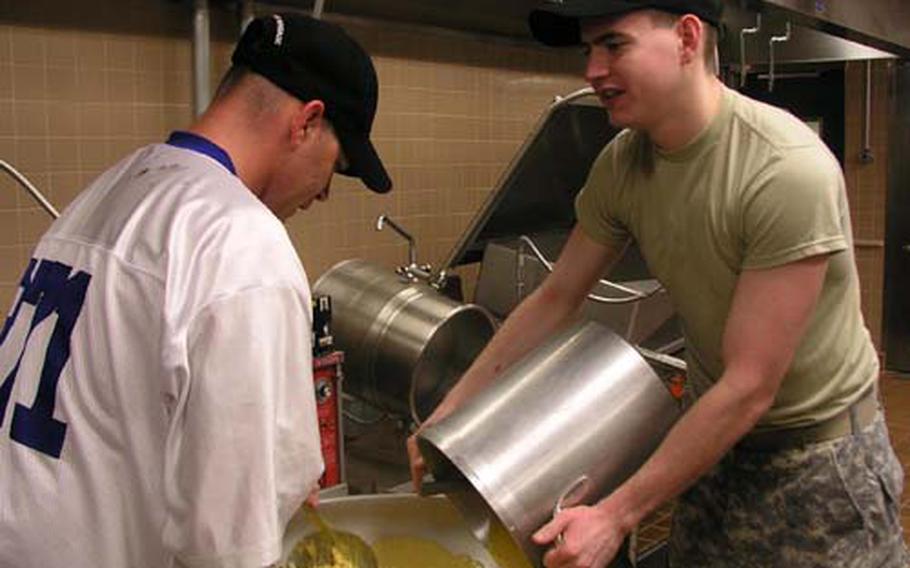 CAMP HUMPHREYS, South Korea &#8212; Pfc. Terrance Davis was just starting to prepare the noon meal one recent Saturday when he made an alarming discovery.

The Army&#8217;s official meal "production schedule" for the Talon Cafe dining facility called for several main dishes to be served that day, among them lasagna.

But as he laid out the ingredients on the official Army recipe card, he found he had only five pounds of ground beef, not the 10 he needed.

It was about 9:45 a.m., and within 90 minutes, hungry soldiers would begin coming through the doors ready to tuck into a solid meal.

That&#8217;s when Davis remembered that he&#8217;d once heard an experienced cook say that the noodle-and-meat dish yakisoba called for less meat than lasagna.

But not so fast. The Army does not &#8212; repeat, not &#8212; want its cooks straying from the official recipe cards. The recipes are written to keep down costs, ensure proper nutrition, and make for a uniform standard. The chicken a la king served at the Talon Cafe in Pyeongtaek should taste the same as that served at an Army dining hall in Texas or Afghanistan.

So Davis had to get approval from his shift supervisor to prepare yakisoba instead of lasagna.

Some might call it improvising, winging it or making do. But soldier cooks have several other names for it: "jungle cooking," "hobo cooking," "cowboy cooking."

It&#8217;s using their skills to cook something in a way that departs from the recipe card but comes out tasting as good or better.

Dining hall supervisors understand that cooks might be forced to jungle cook if they&#8217;ve run out of an ingredient.

And they might add a few of their own touches to a special meal in the certain knowledge that the soldiers they&#8217;re cooking for will taste the difference and like it.

"Generally it only occurs when you don&#8217;t have the proper ingredients for that product, or you feel as though you want to take pride in your product," said Pfc. Branden Little, who also cooks in the Talon.

"The longer you work, the more products you make, the more you get it down, then you figure stuff out like that," said Spc. David Clark, the one who gave Davis the idea for yakisoba.

Although Davis has been in the Army little more than a year, he&#8217;s learned fast.

"For lasagna, for instance, if you don&#8217;t have a certain, like, yellow cheese, you can use another kind of cheese. Like instead of cheddar you can use mozzarella."

Little recalls a recent day when they had to jungle cook the chili macaroni.

"We all knew what it made up, so we just went ahead, grabbed a big bowl, cooked off the noodles, threw it all in there, threw some chili spices in there, a little bit of oregano &#8212; all kinds of different spices &#8212; and it came out great. The customers loved it. They ate it up within an hour."