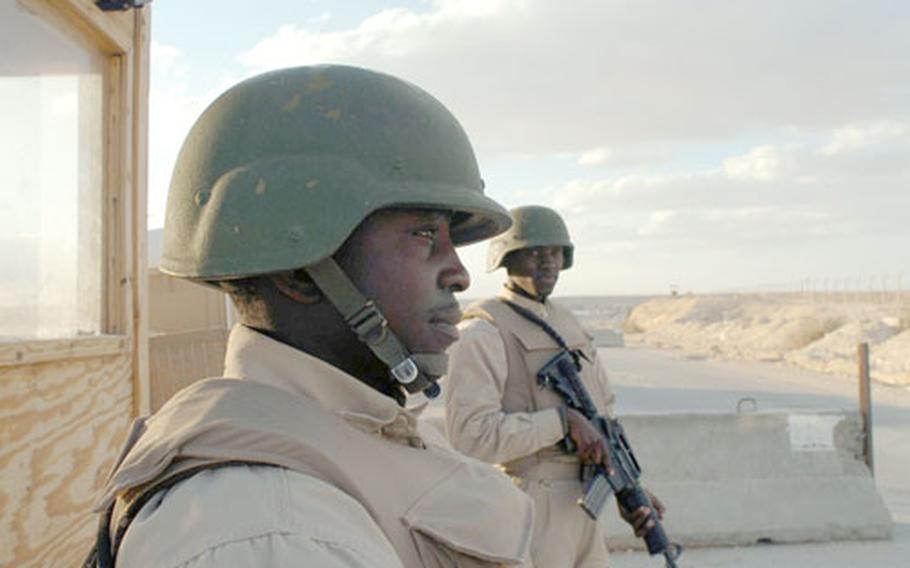 Jesse Muramuzi, left, and Dan Musinguzi, both Ugandan contractors, run a gate at Al Asad Air Base on May 14. (Marshall Thompson/Courtesy of the U.S. Army)

With improved security in Iraq come some interesting quandaries.

According to Ugandan contractors and media reports, the monthly salaries for Ugandan security guards on U.S. bases in Iraq are being cut by more than half &#8212; a result of the strengthened security situation.

Zain-Ul-Afrin Ahmed, a manager for the contractor Dreshak International Limited in Kampala, was quoted in Ugandan media as saying, "This is a free market. The guards are free to get in and out if they feel cheated, but I can assure you, more countries are getting involved in this business."

He described the market as "flooded" and said employment contracts are awarded to the lowest bidders &#8212; resulting in lowered salaries.

Dreshak, officials said, is a subcontractor for another American firm, which sets the salary rates.

The Ugandan labor minister cited fears that, if the some 10,000 Ugandans in Iraq come back jobless, a larger problem would result.

"We cannot stick to $1,300 because these people will be returned and will become jobless," the minister, Mwesigwa Rukutana, was quoted as saying in The Monitor, a Ugandan paper. "We have accepted this $600 because if all these Ugandans working in Iraq come back, where would we employ them?"

The Ugandans guard various base facilities, including dining halls and road checkpoints.

Earlier this week, USA Today reported that spending on private security contractors in Iraq is projected to exceed $1.2 billion, according to federal contract and budget data.

The vast majority of that spending &#8212; around $1 billion &#8212; was by the State Department, the report said. The remaining $200 million was spent by the Pentagon.

Since the beginning of the Iraq war, the amount of money paid out in contracts has been a source of controversy. That hit a peak in September 2007, when a convoy of private security contractors working for Blackwater allegedly shot and killed 17 Iraqi civilians in Baghdad. The firm says the guards acted in self-defense, and a Justice Department investigation is ongoing.