Victoria Mounts talks in her kitchen about the problems she and her family have faced in the 18 months they have lived in an apartment building in Hannam Village in South Korea. She said she began keeping the cereal under the microwave because the ants would get into the boxes kept on top of the fridge. (Teri Weaver / S&S)

Victoria Mounts talks in her kitchen about the problems she and her family have faced in the 18 months they have lived in an apartment building in Hannam Village in South Korea. She said she began keeping the cereal under the microwave because the ants would get into the boxes kept on top of the fridge. (Teri Weaver / S&S) 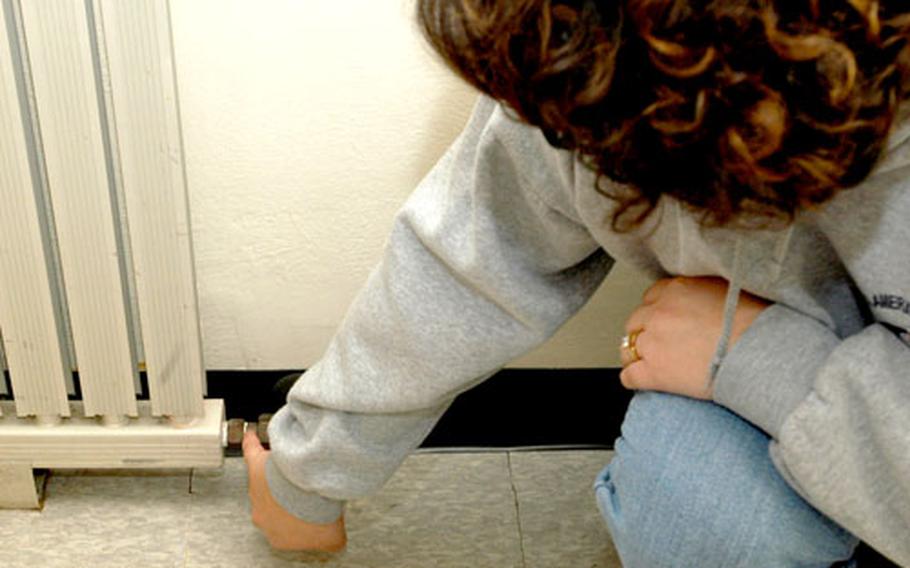 Nancy Pacheco points out a repair to a weak radiator: a piece of string tied around the bottom pipe. (Teri Weaver / S&S)

Workers from the Korean National Housing Corporation, the company that owns and maintains the buildings leased by U.S. Forces Korea, responded quickly and re-attached the cabinet to the wall. But they advised the Mountses to keep the cabinet empty or it likely would fall again.

It&#8217;s just one of the problems the Mountses have had since they moved about 19 months ago into J Building, one of four high-rises at Hannam, a housing area near Yongsan Garrison in Seoul. Their kitchen ceiling has filled with water and bowed. Drafts come in from the windows, strong enough to make the shades flutter. Ants crawl out of the electrical sockets. When the upstairs neighbors do their laundry, the Mountses&#8217; kitchen sink fills with suds.

The Mountses are not alone in their complaints among the 1,000 servicemembers, families, civilian workers and private contractors living at Hannam. And the problems are well known by military officials.

Calling it a challenge is almost an understatement.

No easy fixU.S. Forces Korea leases the housing at Hannam from the Korean housing corporation, an agreement that puts all repairs and maintenance, except for bug extermination, in the hands of the company. The sewage and drainage problems are structural &#8212; fixing them requires an overhaul of each of the four 15-story buildings, a repair job that is not specified in the lease.

For daily problems, residents must contact the housing corporation, a business that is not required to hire workers who speak English, Legere said.

Improvements for someThere&#8217;s a simple explanation for the plumbing problems, Legere said. Two decades ago, Korean building regulations allowed for sewage pipes connected to each toilet bowl to run in a straight line, rather than with the more familiar S-shape seen in most American bathrooms, he said. That &#8220;S&#8221; creates a trap, keeping any flushed smells from coming back up.

But it is being addressed in at least one building.

The work is expected to be finished within the next month or two. At about the same time, Legere hopes to release a plan that will allow more options for Hannam residents. He wouldn&#8217;t discuss the details because solutions are awaiting approval, he said.

It&#8217;s unclear whether any of the other high-rise buildings will get the same treatment as I Building, Legere said.

Almost all of the U.S. military in Seoul will move south in the coming years as part of a relocation plan approved by both the United States and South Korea. As that moving date approaches, it&#8217;s uncertain how much the housing corporation at Hannam wants to invest in aging buildings sitting atop prime real estate in Seoul, Legere said.

Attempts at a solutionSome improvements have been made through the years, Legere said.

Each year, the housing corporation is required to spend 3 percent of USFK&#8217;s entire lease payment on quality-of-life improvements at the military&#8217;s discretion, Legere said.

Some recent projects include new playground equipment, shelters for barbecue areas, sliding glass doors and windows and mini-blinds for all the units, he said.

Additionally, the U.S. military has spent some of its own money trying to make life at Hannam better. Some of the housing units are low-rise apartments. The military spent $4.4 million renovating and enlarging some of those units four years ago, Legere said.

Legere also said he would look into the possibility of adding a bilingual worker to Hannam to translate between residents and workers.

None of that, however, addresses the stale smell coming from the Mountses toilet.

They are trying to do their part to improve living conditions at Hannam. Master Sgt. Ed Mounts volunteers as his building&#8217;s coordinator, taking concerns from residents to housing officials, posting signs in the hallways about trash collection and walking through the entire building once a week to check for problems.

Mounts, who has been in the Army 18 years and has lived in military housing in the States, said he can see the problem from the Army&#8217;s point of view.

Despite problems, residents not eager to leave

Despite the problems at Hannam Village, most residents don&#8217;t want to leave, many have said.

Most of the housing is filled with company-grade and senior enlisted soldiers who can bring their families to South Korea. The compact housing area includes a commissary, a post exchange, community areas, playgrounds and a small food mall. Buses take children to school at the Army&#8217;s nearby Yongsan Garrison, and most people feel secure living inside the complex.

The village was built in three phases, which were completed between 1980 and 1982. The complex offered newly built apartments with balconies on a patch of land only a short ride away from the main base, Yongsan Garrison. There was no air conditioning then in the buildings, but there were also no traffic jams.

Since then, the Itaewon and Hannam neighborhoods outside the fence have exploded with villas and apartments with floor-based heating, new appliances and tubs with Jacuzzis. The increased population has increased traffic, so now the short car ride between Hannam and Yongsan can seem like a suburb-to-city commute, residents say.

But all those missing amenities and traffic jams would be easier to swallow, residents say, if it weren&#8217;t for the stack of problems with plumbing and other basic elements of their housing.