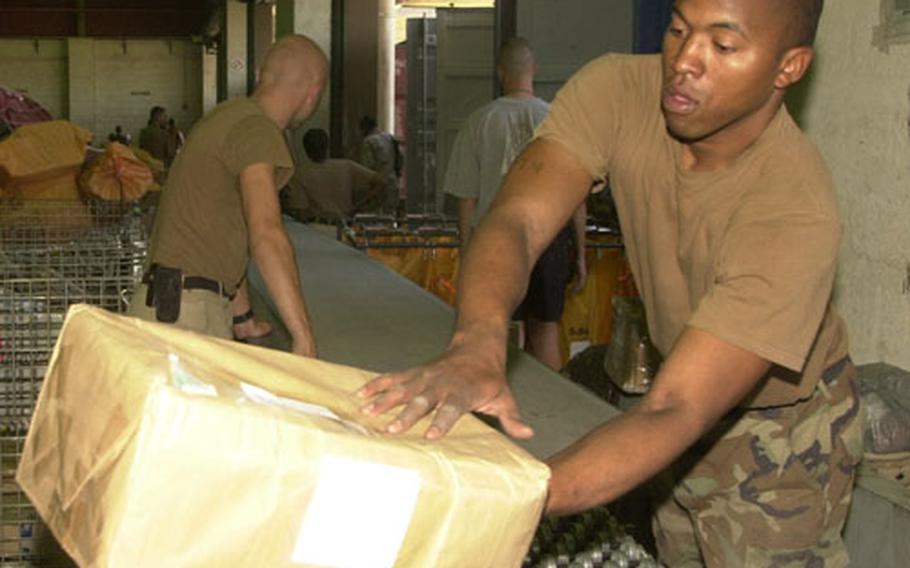 Spec. Barrett Farley, a member of the Ansbach, ermany-based 90th Postal Company, throws a mailed package into a bin at the central military mailing facility at Baghdad International Airport. Responding to complaints from soldiers that the mail in Iraq is slow, U.S. military postal workers have implemented several changes. (by Scott Schonauer / S&S)

Responding to gripes from soldiers about how slow the mail is in Iraq, military postal workers are making several changes to deliver packages and letters more quickly and more efficiently.

Postal workers are exploring the possibility of flying some mail to outlying bases, sending packages and letters to camps instead of roving units and looking to turn over much of the delivery work to civilian contractors.

So far, the improvements seem to be working.

While a letter could still take several weeks to reach a soldier if he or she moves from base to base, the average time is about two weeks, postal workers say.

Some troops living and working in Baghdad have received mail from the continental United States in as few as five days. Boxes sent through the military parcel service from Germany have arrived in Baghdad in as little as three days. Stateside mail is getting to soldiers on an average between 11 and 15 days 85 percent of the time.

Last week, the military began flying tons of mail daily to northern Iraq through the international air express company DHL. Four to six pallets of mail are picked up at the central warehouse at Baghdad International and flown to troops in Mosul about twice a day.

Postal workers are looking at possibly flying more mail to outlying bases for security reasons. Coalition convoys throughout the country have come under daily attacks from insurgents. Some mail trucks have had to drive through small-arms fire to get to their destination.

The main mail distribution center at the airport &#8212; the Joint Military Mail Terminal &#8212; delivers between 170,000 to 200,000 pounds a day, or more than one pound for every U.S. soldier deployed to Iraq. Since the first postal worker arrived in Baghdad, more mail handlers have arrived to help work out the kinks of the system.

The postal force at the airport has grown from about 70 people to more than 270 people in the last three months. And more are on the way.

In addition to adding more people, the military has changed the way mail is sent to troops. Shortly after the war, all of the mail went through John F. Kennedy Airport in New York. Now, mail also comes from Miami, Dallas and San Francisco.

Instead of mail being sent to a unit, the mail is delivered to the location of a particular soldier. Before the change, mail would be delivered to a unit even though that soldier might be in a different location, making it difficult for his or her mail to catch up with him or her.

Dozens of soldiers have written letters to Stars and Stripes blasting the military&#8217;s mail system for slow and inefficient service. Some have complained about stateside mail taking more than two months to reach them in Iraq.

Sgt. 1st Class Dennis Krivonak, a reservist who is a U.S. mail carrier when not deployed, said the service has improved dramatically in the just past couple of weeks. He pointed to a package from Seattle, that arrived three days after it was postmarked.

While the Baghdad warehouse might receive a letter in as few as five days, sometimes it doesn&#8217;t get to a soldier because he or she has moved to another base.

In mid-May, Kellogg, Brown & Root began driving all the mail to the nine base camps in Iraq. Each day, the military escorts the civilian drivers to the camps.

By the end of the year, DHL and Kellogg Brown & Root will take over the bulk of the mail operation in the country, freeing up many of the reserve and active-duty postal units so they can go home.

Second Lt. T.L. Chandler, who is attached to the 1st Armored Division, said soldiers delivering the mail know how important it is to get to the troops as fast as possible. He said some soldiers refuse to take days off because &#8220;it&#8217;s that important to them.&#8221;

He added that the angry letters to the editor only inspired the postal clerks to work even harder.