Improved Internet access just one of many upgrades planned for Baumholder 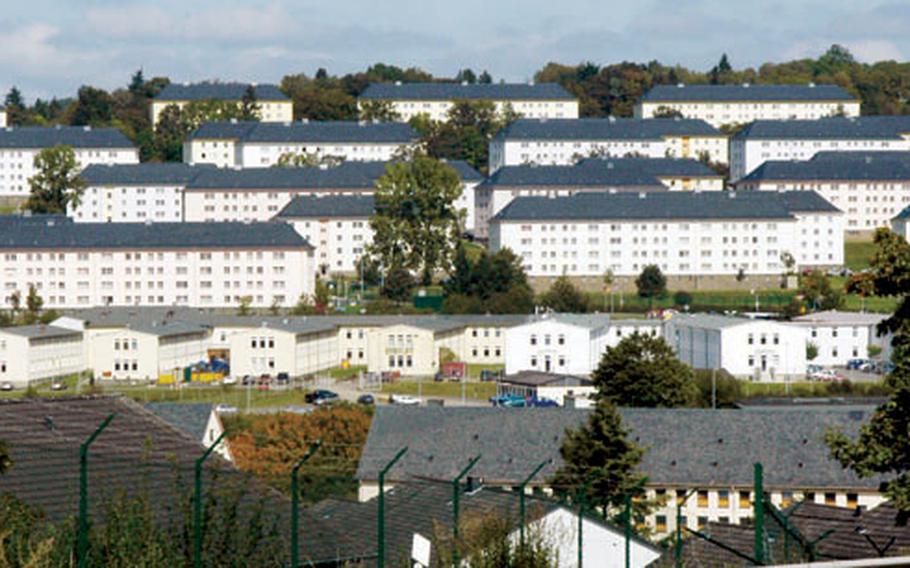 Now that Baumholder has been named one of Europe’s “enduring” bases, the Army plans to make some improvements to the post in southwest Germany. (John Vandiver / S&S)

BAUMHOLDER, Germany &#8212; One of the more common gripes voiced by soldiers here has been limited access to high-speed Internet and a shortage of connections inside barracks.

Soldiers sprawled on the floor outside the local coffee shop late at night, tapping into the lone wireless zone on base was a common occurrence before the soldiers of the 2nd Brigade, 1st Armored Division departed for Iraq earlier this year.

Things will be different next year now that the U.S. Army Garrison in Baumholder&#8217;s future is secure.

"Taken care of. It (the high speed Internet) will be here before the soldiers return," said Lt. Col. Derek Rountree, garrison commander at Baumholder.

The arrival of better and expanded Internet coverage is just one of the improvements on the way to Baumholder now that the base has been declared one of the Army&#8217;s "enduring" installations in Europe. With the days of living in limbo over, garrison officials are busy planning for the future.

In the case of expanded Internet coverage, the improvements are the result of a commitment from Deutsche Telekom to install the new lines. When the base&#8217;s future was uncertain, the company was unwilling to put in place the costly technology because it was unclear if the company would get a return on its investment.

That changed with last month&#8217;s announcement that Baumholder would remain open, Rountree said.

A host of other upgrades are now being conceptualized. Garrison officials say it is still too early to define precisely what will be built or establish a timeline for completion. But once the new fiscal year is under way, some of those details will emerge.

"There&#8217;s a lot of stuff being planned. It&#8217;s all in the early stages," said Rountree, who expects to have more information about projects in September. "I can say that we&#8217;re going to have at a very nice looking post."

For starters, new family housing will be constructed in the near future. Rountree declined to say where the housing will be located or how many units will be built since the final approvals aren&#8217;t in yet.

Another project pending approval is the construction of a new state-of-the-art fitness center, which would be built where the Hall of Champions now stands. The roughly $3 million project was conceived some time ago, but garrison officials were unable to push forward with the project while the post was on the list of closing bases. That project is now under consideration.

In August, a team of stateside consultants will be in town to help the community plan for future development.

"We have very big plans. Our plans are probably bigger than our wallet right now," Rountree said.

In the meantime, other projects already funded are moving forward. About $7 million in barracks renovation work is being performed while soldiers are deployed. There&#8217;s also roughly $19 million in improvements to headquarters buildings and the post&#8217;s airfield hangar and another $2 million for the renovation of three motor pools.